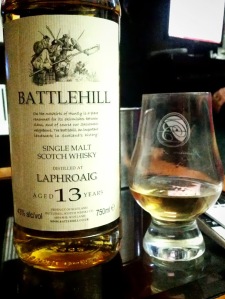 TOModera here with a rare, independent bottling review. I’ve been trying to finish up the open bottles around the apartment, as well as some of the samples, thus my reviewing has slowed down. That being said, I had a swap request for some Laphroaig Battlehill 13 year, and as I was opening the bottle anyway to make an excellent trade, I thought it was in my best interest to have a dram.

Battlehill is an independent bottler located “[on] the outskirts of Huntly….renowned for its 16th century battles between clans, and… Sassenach neighbours.” All of their Scotches are not coloured (yay) and bottled at 43% (uh-oh). That being said, when my parents were south of the border, and Total Wine was out of the Great Oog, I decided I could “settle” for an independent bottle of Laphroaig.

My life is so hard.

Bit of Trivia: If you look up Laphroaig Battlehill 13 year in Google, Texacer’s blog with its review is the first thing to pop up.

Anyway, without further ado, let’s see if this was a good buy.

You got your chocolate in my smoke! No, you got your smoke in my chocolate! And as someone who has smoked a cheesecake before, let me tell you it’s a good time.

The nose is a bit more relaxed than the Quarter Cask or the 10, this one is more dessert like. It’s a nice change, and pairs well with the soft smoke.

There’s a creamy, very salty and sweet mixture to this one, like a good date and an awkward morning. Almost like chocolate covered pretzels. The thing I’m missing is the peat though. It’s almost completely lost or melded into other flavours, which I have to dock it points for.

More sweetness, and the carrot flavour I had before is really picking up. The smoke is back, which is nice. A lot of earth pops out as you finish it as well. Mellows out over time into a dusty/bacon/carrot juice flavour.

Conclusion: This was a good buy, and I’m quite happy with it. It goes beyond the typical Islay smoke show, which is a nice change of pace, however I almost felt like it’s gone too far. I wish there was a little more peat in the flavour, as the sweet tastes really knocked me out of it. I’d still order this over the 10 anyway, yet I think I prefer the QC over this one due to my love of peat. Perhaps if I paired the Laphroaig Battlehill 13 year with some strong cheese it would truly shine. I, might next weekend at our Scotch tasting. Will update if that goes well together.

One thought on “Laphroaig 13 Battlehill”