So lately I’ve been doing a couple of things for my general health. One of the main one is only having 4-6 oz. of whisky per week, and only on weekends. As this is the busiest time of year, alcohol + stress = bad if I don’t watch myself.

What does that mean? Well it means all the swaps I’ve done are not getting reviewed as quickly as normal, and doing a multireview can take a few weeks. Enter the Laphroaig Triple Review.

What can I say about Laphroaig that hasn’t already said? They are an Islay giant, their name comes from a questionable history, and they are the only whisky to carry the Royal Warrant of the Prince of Wales. So let’s see if it’s good enough for Chuck, then it’s good enough for me.

A special thank you to /u/kinohead[2] for this sample. He was nice enough to swap with me so that I didn’t have to beg and cajole bartenders to serve it without ice…. and for less than $12 a shot.

There’s some vanilla sweetness, lots of peat, and a balanced acidity to the nose. I’m going to blame the faint smells on the Abv., as that’s my go-to whipping boy in these cases.

Reminds me of campfires on the beach, oddly enough. But not ones I’m at, ones I’m down the beach from. Not that I’m stalking them, I just happen to be there. Staring.

The metal taste sticks around like that one girl at the party who slept over, had a bath, fell asleep on your couch, and then had night terrors the day after while you’re trying to watch cartoons and eat pancakes. Dammit Jenn! I didn’t hear Bugs’ punch line!

Moving on… the other flavours are reminiscent of the Quarter Cask I had before, however they lean more to a pepper/fennel taste than the peat/iodine flavours that were up front in the QC.

Nice finish, little bit of burn telling me that this shouldn’t have been lowered past 43%. Bit short for my tastes, yet the peatiness is there, which is nice.

Conclusion: Some people like Ardbeg more, and some people like Laphroaig more. I tend to lean towards Ardbeg, as I find it’s the bull of the two. Laphroaig 10 tries to be more subtle than Ardbeg 10, and I think there’s some things that go against it. The low Abv., the young age, and the peat all make this very difficult. It’s good, just not mind blowing. I wouldn’t turn down a dram (ever), but I think it’s more of a great starting point then a great dram.

I was very honoured to received this sample from /u/CaptainPortugal[4] . He’s a gentleman and a scholar for sharing this hard to find dram with me. 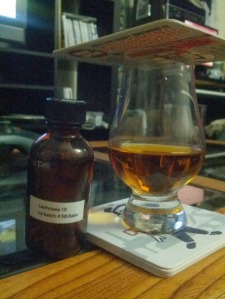 Now this is a big, powerful nose. It’s strong, it has depth of flavours, and it eventually evolves into a nice spicy/coconut blend while still keep that wonderful campfire smell.

I may have to take back my comments about subtly and young age after all.

The other day I was so on edge that two of my coworkers surprised me by just walking up and talking to me. This taste was more surprising.

Oh god that was dull. Let’s try this again.

I surreptitiously watch YouTube, letting time flow over me as a sloth urinates at the roots of a tree. The screens are a pair of headlights coming at me, and it’s then when my world is knocked out. “TOModera, can you check…” A yelp and a vertical jump stop them in their tracks.

No more Angry Birds and YouTube at work at the same time.

Anyway, I wasn’t expecting a dry taste, and the amount of tannic flavours. It’s really quite different and nice to have something like this. Sure the flavours are present in other whiskies, true, but this evolves them to show you a different experience. Also it’s smooth as fuck!

More smoke and light, dry sweetness. The red onion flavour is a little bit of a surprise, though I got used to it and actually wanted more of it as time went on.

This would make an awesome molé BBQ sauce. 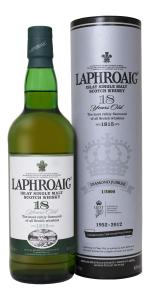 And to finish up, the Laphroaig 18 year, another sample from /u/kinohead[6] , who is awesome sauce.

Time has taken the 10 year Cask Strength mixture and let it grow into a very subtle, sweet/herbal mixture of flavours. Like being in a leather bakery kitchen by the sea side, this leather daddy’s nose will make you beg for more.

This is almost what I’d believe Bunnhabhain 18 would taste like if it was peated. Almost a Birch Tree Sap flavour. Wait, that’s not relatable. It’s tannic, like tea, but not overly, and almost bitter, though there’s a lot of heat maybe? But that mixes with the spices to make ginger.

Okay, now I’m even confused. This one tastes good, has different highs and lows, like a manic stewardess.

Simpler finish than I was expecting at 18 years and 48%. Not that I’m complaining, it still hits all the right notes I want from a Laphroaig, and the peat has morphed into some great flavours, I was just expecting something… I don’t know, like the Cask Strength, I guess. Unique or different.

Conclusion: So the question comes down: Is this worth $100 more (CAD) than the 10. And at first, you’d probably say no. It’s only 8 years old. But then you notice it’s better Abv. Granted it has e150 (or at least looks like it) and the Cask Strength is better, however I can’t get the Cask Strength so go help someone across the street.

It’s a good dram. Not great like some of Ardbeg’s, not over the top, but finely crafted. Don’t turn down a dram if offered.

Overall Conclusion: So where do we go from here? Well overall, I think Laphroaig does some things right. They have a distinct medicinal, peaty flavour that almost sits perfectly between Ardbeg and Caol Ila on the flavour map. They introduce a nice sweetness and they try different things. They even offer an 18 year at an Abv. higher than 43%, which is a lot more than I can say about some other distilleries. I think they’ll always be tied for second with Caol Ila for flavour, and there isn’t anything wrong with that.