So I’m currently working on my next multiple review, however I have a couple samples that just can’t be grouped together, no matter how much I think outside the box and attempt to match them like Duplo blocks and the cat.

Awhile back, when it was warmer out, I had a Scotch tasting party[1] . It was a great time, and I was able to review 4 different Scotches I hadn’t before. One of them was Tobermory 10.

So why am I back? Well if you check the link above, you’ll notice that /u/reddbdb[2] mentions that I may have overloaded my tongue during the nights many foods/desserts/drinks, even though I did only have a little bit of each, a full glass of water between, and stuck to the more calm elements (and passed on Cigars/Pipes). I had thought it wouldn’t affect my taste, however it did, and you should listen to /u/reddbdb[3] . I’m not calling him out, I’m saying he’s correct, even if I didn’t enjoy this dram.

That all said, I decided that two of the drams were good contenders for re-reviews, and one of them was theTobermory 10. Even if my tasting method was up to par, the bottle could have been off.

So, in order to do this test, I made sure I didn’t eat anything overly spicy, waited at least an hour after eating, had only water, and didn’t have any other whisky for at least 15 hours. I bought a sample directly from Scotland (not from the island of Mull though) to avoid any other bad casks, and was in a good mood from watching the 50th anniversary of Doctor Who. I’ve convinced myself that the previous two times I had this were from a bad bottle, ensured I didn’t go outside and therefore clog up my sinuses, and the cats are no where near the dram and neither are their litter boxes, which are freshly cleaned. The glass has been cleaned and primed.

If I get any more scientific in my review, I’ll have to ask for a Nobel price. 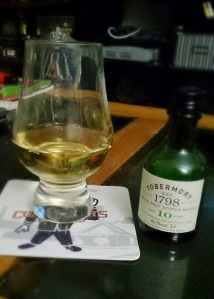 Okay, okay TOModera, keep it together. Just give it some time to open up. Granted you already did for about 20 minutes, but maybe, just maybe, something just died in your air vent.

No, nothing dead in there? Okay, give it some more time.

After another 10 minutes, the funk calms down a little, and is replaced by a wet wood and smoked rubber smell, with just a little bit of butter and rosemary. Somewhat akin to an Islay without peat. I can see where I thought there was peat before, as it has elements of Peat in it, but now taking more time, I realize this is just horrible.

Taste: Rubber, smoke, apple, butter, stewed vegetables, creme anglaise, rock salt, mace (this is a spice that is made from the nutmeg tree skin), lime

More rubber… yay? Okay, after awhile, it has some nice flavours, but the mixture of them and the ever present taste of vegetal and bad lime curd makes me question my life choices.

Bitter is no longer a word. Just use “Tobermory” now, and we’ll understand.

Seriously though, it’s peppery, metallic, bitter, kinda smokey, and mostly just burns. I let it sit some more, and it just didn’t get better.

Conclusion: If you ever want someone to not drink your booze, serve them this first. Seriously, I was considering another dram after this, and I just couldn’t. It’s not completely horrible; there are elements within it that remind you of what whisky should taste like. However there’s an ever present funk and odd flavour pairings that just ruins those elements. Here’s hoping that when I find the 15, it doesn’t taste like someone mixed chocolate milk and soap.

1001 Whiskies to taste before you die re-review

101 Whiskies to try before you die re-review

One thought on “Tobermory 10 [Re-Review]”