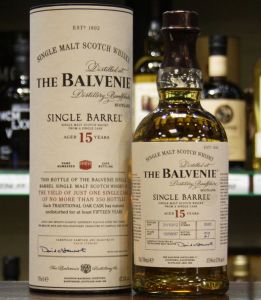 Just came off one of those weeks where I was too busy for my own good. Between work, hanging out with friends, keeping up with my Tomatin mega review, D&D, a few late nights, and traveling across the worst city for traffic in North America far too many times during some of the worst accident seasons we’ve ever had, I was pooped.

I was able to finish one review on Friday and then fell asleep watching Q.I. before I could get to the others.

The time change hasn’t helped that.

Aged in single ex-bourbon casks, this limited edition, higher than normal Alc. content beast is a main stay of most tasters. Only 350 hand-numbered bottles are brought out each year.

A friend of mine picked up a masters of malt order for me when she was coming back. She’s awesome. 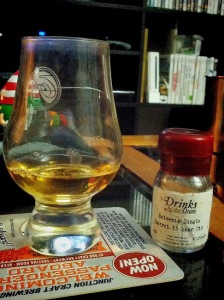 Okay… there’s elements here that are purely Balvenie. The floral elements, the fruit, some vanilla, however this has more of a sour element to it, like sniffing lemon curd.

Very different initial hit of earth that sticks around. Very disjoint. Much earth and heat. So un-wow.

It’s not bitter, it’s just… not a group of flavours I like together? You can tell there’s quality, I just don’t really like the mixture of flavours.

Lots of earth, and there’s a vinegar and dill element that tastes like pickle brine. Again, there’s quality in this, but that’s like offering me the best pickled beets on the planet from the greatest preserver; I’m not going to enjoy it.

Conclusion: I’m not a fan of this one. First off, don’t take that to mean it’s bad, it’s just… not my cup of tea. Everything about it is quality; good mouth feel, great Abv, clear flavours, good nose, different than other Balvenies yet still has some of their character. That all said, I just don’t like it.

My wife commented that she found the flavours disjoint as well, and thinks I should rate it lower. I’m of the mind that I can still drink it and enjoy it for the quality, so the number is higher.

One thought on “Balvenie 15 Single Barrel”