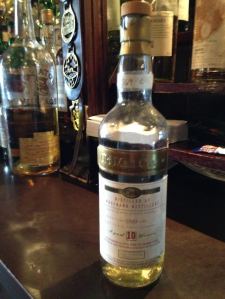 So it’s day 3 of Fan Expo. When I reviewed this… not as I write this. I’m writing in the present for the past.

And I’m at The Feather’s Pub. You know the one, if not, I’ve linked it.

It’s Saturday. If you’ve ever been to a Con, you’ll know that Saturday is rough. This year they oversold tickets… again… for the next time… during the Anniversary. Without going into too much, after seeing my Q&As, we got the heck out of there, as it was packed.

Leaving early was in the cards, and to Feather’s we went.

Rosebank is a silent still that closed down in 1993. At the time, United Distillers felt that Glenkinchie could handle the Lowland whisky from them, and that their distillery was prettier.

Well, that worked out… I guess…

Not going to lie: 1993 was a bad year for pop music and decisions about Lowland distilleries.

Also, this is triple distilled.

Let’s see how this tastes!

Nice complex nose on this one. Good amount of bitterness/acidity, and drinks like an oaked Chardonnay.

Starts out with some burn, however once that goes away, the gummy worms are back.

If you don’t like floral notes or quite sweet whisky, this isn’t for you. It is really sweet. Almost too much.

Where the fuck did this finish come from? It’s like I spit out the old one and just swallowed something else!

No, not that…. it’s only Wednesday.

Really earthy finish. I like it, however it’s completely out of place. It doesn’t fit, at all

Conclusion: It’s a sweet nose that is nicely balanced, an unbalanced sweet taste, and a finish, that, while tasty, doesn’t fit in at all to the rest. So much so that it really does drag down the score on this one to “I’d buy a bottle, if I had extra cash and already owned other things I wanted” or “You should try this before buying”.