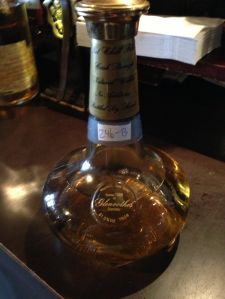 So, time for another interesting IB! This time, brought to me by an amazing waitress at The Feather’s Pub. Seriously, go there, they don’t give me anything to say this, it’s just really, really tasty, and there’s 400 different single malts, most of which are IB.

Anyway, today I’ll be reviewing Glenrothes 1989 Liquid Gold Caledonian Selection. I’ve never heard nor seen anything by Liquid Gold before, so I was very interested in this product.

And… well, shit, I can’t really find out anything about Liquid Gold. At all. I can tell they are an Independent Bottler, some guy in Germany had some as well… uh… help?

Glenrothes themselves like to be quite enigmatic as well: They have released NAS bottlings since 1993. They mix up Ex-Sherry and Ex-Bourbon casks.

Also, Glenrothes is owned by Berry Brother’s and Rudd, which is an IB themselves…. so this seems like a bit of a treat. Also it’s from a Hogshead, which didn’t say anything about a sherry, so this is different than the usual Glenrothes, which are more sherry casked than Bourbon casked. Also this was picked by my wife, completely out of the blue, so I don’t even know if I’d typically order it.

Let’s see how it turns out. 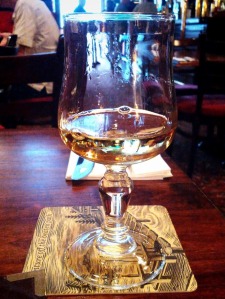 Bottled: I think 2000 or 2001. Had trouble finding anything. Will update if anyone tells me otherwise 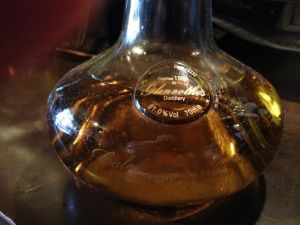 Very, very sweet, like walking into a bakery. Not as strong as you’d expect given the Abv.

Also nice amount of smoke in there. Like a nice brandy. Now I need a fire, maybe a large hunting dog, and a sitting jacket.

The sweetness and smokiness continues into the taste. It’s not a huge flavoured dram though: However it needs more Fruit. Like an Ugly wedding, fruit would help it quite a bit.

Some nice acidic notes, fruit, and some aspects of peat. The finish is where all the burn is waiting, watching, probably ending up with a couple cops being called, coming for you.

Or perhaps it’s just a little too hot. And the Acidity eventually opens up too much.