So it’s the days leading up to Thanksgiving..

Wait, no it isn’t, I blabbered on about Thanksgiving two reviews ago… oh damn, I got these out of order.

Whatever, not like anyone follows them chronologically. That and I do enjoy a pulp style story.

So I’m a spermatozoa… wait, too far.

So I’m looking over my reviews, like a sad king surveys his sad kingdom, and I am always the kind of person who wants to spread out and try whiskies that are new. Specifically regions I’ve underrepresented.

So first up there was Lowland, which I enjoyed a lot. I now have a decent amount of Lowland reviews.

Then there were World Whiskys: I’ve bounced around, and have some bulging to do on my Aussie reviews (in the future). I did a good amount there. Maybe some more Irish and Japanese soon as well.

I tried some Utah, and Texas malts, and have been happy with them.

And then I come back to Scotch, and I see a ton of Islay, Speysides. I do a shit town of Highlands, just so I can find a Highland I like.

Campbeltownwas once Scotch central, with as many as 28 distilleries (or what I call Heaven) all in the Burgh of Campbeltown. Now the whisky has gone elsewhere, and there’s only three distilleries in this area: Springbank, Glengyle and Glen Scotia.

So, in an effort to fix this again, I’ve stated I’ll do reviews of my CampbeltownScotches only, until I’m done them, or I hit 300 whisky reviews total, whichever comes first.

So, first up we have Hazelburn. This is the newest addition to Springbank. It is distilled three times in old copper stills, made with unpeated barley, and has been going since 1997.

Well, let’s see how these offerings stack up.

Thanks to /u/muaddib99 for a dram of this now discontinued malt!

So we’ll start with the first juice to roll out the doors, Hazelburn 8. At least, I think it is, can’t really tell with the whole “CV” thing that Springbank does. Correct me if I’m wrong, I’d love to know.

So this was a standard offering from Hazelburn. It’s now been replaced by a shiny 10 year bottle that thinks it’s soooo pretty, but we really know that it’s just older.

Ahem…Let’s see how it tastes: 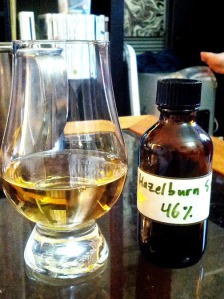 How do I describe lemon smoke? Imagine if you set lemons on fire, and then burned down someone’s house with the lemons. The smoke from that would smell like lemon smoke.

The flavours are easy to suss out on this one, though you have to LOVE lemon to enjoy it. It’s unbalanced towards lemon.

Very sweet. Almost too sweet. It dials it back a little, and them… lemons.

This is officially the Will Sasso of Scotch.

There’s an earthy side in the finish that goes well with the sheer amount of sugar and mother fucking LEMONS!

What I’m saying is: There’s a lot of lemon here too, though it’s in there with more sweetness and earth.

Conclusion: This acts its age, that’s for certain. Oh, and there’s a metric shit ton of lemons in it. It’s brash, working out some things, and I can actually say I’m glad they paired it back a tad in Abv. Good first start, not something I’d want to drink all the time, as it’s sweet and there’s a lot of LEMON, yet not bad, all the same. 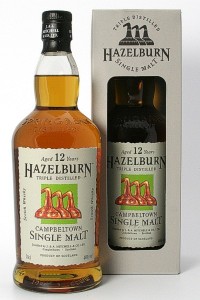 So let’s jump back in time again.

No, not before I was born this time.

I’m bumming around Edinburgh, going through what most of the whisky network called my great bender (okay, only I called it that), and I stop into…holy shit, I drank so much I forgot it for a second… Cadenheads.

And Cadenheads is an Independent Bottler that is owned by Springbank. So after taking it all in, not feinting (from shock, not the drink… this time), I decide I’m going to pick up minis of things I can’t hope to find.

One of them was Hazelburn 12, the older sister/brother/whisky doesn’t have a gender of the distillery’s lineup.

And it has sat on my shelf for a year as I attempt to catch up one samples (which you never do, by the by).

So this whisky has been placed in sherry. For how long? I have no idea. Nobody will tell me. Probably because I’m a rude person. Or because the Springbank website hasn’t been updated in 5 years.

Anyway, let’s see what a sherry influenced, 4 year older, more mature Hazleburn will give us. 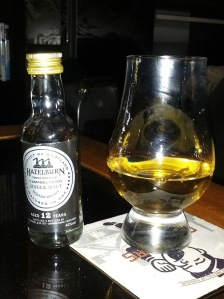 Wow. This is a change. Here I was expecting to look up and have a lemon in my mouth. Instead, there’s this interesting, sweet, almost Lowland-esque nose, yet there’s some smoke and strong spices in there too.

Very unique, nice flavours. And yes, the lemon is back, however now it’s adding something rather than dominating.

It’s really creamy too. Like, I’m worried I just ate a flan instead of a scotch kinda creamy.

That all said, the curry note, along with the lemon, though not dominating, could have more time to become more complex.

The finish is nice, however somewhat all “baked goods”, which I like, however you may be looking for something a bit more complex.

Conclusion: This is a well put together dram. Much better than the 8 year, it has more complexity (thought I’d strive for more), good taste, and has started to really evoke that Cambeltown “Smoke and Fruit” flavour profile that I’ve had before.

It’s not as good as Springbank, maybe due to the triple distillation, yet I like it. I’d buy a bottle of this, if given the chance (again).