So… Here’s the Situation: It’s my Birthday, right? And rather than have a party, and have people all be confused as to what to buy me, and get more Whisky Stones, I go out to The Feathers Pub. And I have many a dram, and review them, and here I am.

This year I’m going twice. First time, my wife picks all the drams. She reads over the questions I ask, and then chooses some based on… her general mood. And what I’ve never reviewed before (I have a spreadsheet!)

So, there I am. I’ve had quite a few drinks. And a really good salad. And a ton of water, and breaks. The Grey Cup starts in a few hours, and I really don’t give a shit. I only want to review something else.

An Island instead of an Islay? Probably a good idea after my multireviews last week.

Okay, let’s do this. I’m pretty drunk. I’m mostly buzzed. I’ve had Highland Park in an IB at Cask Strength before. And I loved it. Heck, it was only Bourbon Barrel. This one is the normal Sherry Cask/Bourbon Barrel mix. I’ll love it.

It may be a good idea that I cut it off at this point. I’ll have the Amrut Peated another day. 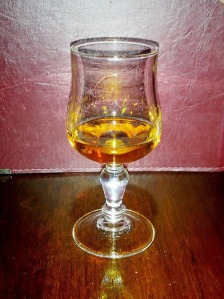 Initially reminds me of the Highland Park 12 year, though there’s more to this. The acidic notes aren’t as sour, and it’s more creamy. Also there’s a yeasty/warm bread note that adds something.

I’d probably have guessed this was a rum cask, and I’d be wrong. It’s better than the 12 year, though still has some 12 year notes in it as well. They’ve tweaked it just a little bit, which is nice.

Big, youthful, burning finish. Very fruity. Like diving into a Farmer’s Market head first. With your tongue. At full speed.

So some good bits and some rough, young parts.

Conclusion: This… this tastes nice. Not huge nice over the 12, but better than it. It’s rough, I’ll give it that. There’s some things that are gone, which I like (a little acid), and there’s some burn and tons of Sherry at the end that doesn’t make it better than the 18.