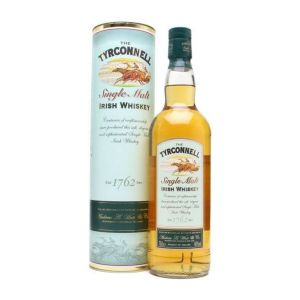 This past Saturday I had an exam. In Accounting. And it was rough. I had to call my parents afterward to tell them I had a new daddy; that exam.

None the less, some friends and my wife (whom I’m also friends with, but I have to mention separately due to insecurities caused by society), decided to hit the bars.

So starting off the night at the Overdraught Irish Pub, I thought I’d start with some Irish that comes recommended in a few books I received.

The first thing you’ll do while ordering this Single Malt is try to pronounce it. The Tyroconnell Single Malt is a little bit of a head scratcher when it comes to pronunciation. I’m not even going to try and teach anyone, as I’m Canadian and thus, if it isn’t French (or sometimes Spanish), I can’t pronounce it correctly.

Not even English. You wouldn’t trust my reviews if I dictated them.

Anyway, Tyroconnell Single Malt is made by Cooley distillery, which is part of Kilbeggan Distilling Co., which is owned by Beam Suntory. The distillery was actually revived by Cooley, as Tyroconnell was owned by the Watt Family. Legend has it they owned a horse that won a legendary race, and thus they named the whisky after said horse because it had 100 to 1 odds to win.

It’s probably not 100% true though, because that’s the kind of horse you put out for stud, and we don’t see many Tyroconnell’s about these days.

Anyway, this dram is made in copper pot stills with 100% malted barley.

It’s an Irish alright. No smell of horse, which is good.

Starts off with the typical Irish nose of yeast/lime/bread dough, though there’s a little bit of spice, and a signature creamy smell to it that’s nice. I’ve had that in other Irish whiskey before.

Heck, if you milked the horse, they’d run faster. Especially if they were male.

Somewhat light taste to it. Takes some time to parse each part. Smooth. Not overtly complex, though it’s a nice sipper.

And no horse. I’m disappointed. Really hoping for horse meat in the finish.

More citrus and yeast flavours that are in Irish whiskeys again. Some stone fruits, which are nice.

Conclusion: This is a pretty good basic Irish whiskey. I’d go out to say that this is better than the standard Jameson, so I’d recommend buying it over that. Or using it as a starting point for any Irish whiskey, for that matter.

Not overtly complex, not too yeasty, and has a nice label with a horsey on it. What more can you ask for? I look forward to trying the different finishes.

One thought on “Tyroconnell Single Malt”