Special thanks to /u/Randimosity for the sample of the Cask Strength.

There are moments where I’m quite full of myself, and start to think that I could someday be called a “Writer”. I’m working on a novel, it could happen… maybe?

And that’s why I bought this whiskey.

No hubris, none of that. No time for it, until someone gives me a bad critique on Scribophile or someone on here says my reviews suck again. Then I’m a pile of shit, crying my Writers Tears.

Writers Tears is made using a mix of single pot still and single malt whiskies. So it’s a blend… and they don’t say how much is of each.

Single Pot Still whiskey is an Irish tradition. The whiskey is made from malted and unmalted barely in a pot still. I’d like to say it was done because it makes a fine tasting whiskey (which it does), however it was actually done to avoid over Taxation by the British in the 19th century.

I’m wondering if it’s due to the line of text on the bottle:

“I traded my tomorrows to remain in yesterday whiskey tears are falling now, each one cries another day”

So in this case, it’s not actually Writer’s tears (as in salt water from their eyes), but rather Writers Tears, as in whiskey drops on the manuscript, which comes from trying to write and having that horrible little goblin in your head tell you that everything you do is horrible and wrong and could be better.

Well, it’s time to drown the goblin. Up first, the standard offering!

It’s Irish, that’s for certain. There’s yeast, it’s light, and yet… a nice amount of herbal heat and floral fecundity.

I hesitate to use pomelo, because it’s been awhile since I’ve had one, yet it screamed pomelo, so I’ll stick with it.

A finish so fast you’d think it was Don Quixote’s horse. Hard to pick out anything other than a little margarine and lemon. Letting it sit brought out some more honey, but this finish has been beaten by the Abv.

Conclusion: It’s good. It’s nice to sip on, smooth, and has some interesting parts to it. Or to imagine myself a morose writer, more so than a morose person who is working on a novel that hasn’t bottomed out yet.

There’s a nice nose and taste to this. The finish is ruined by the Irish Whiskey ‘need’ to be 40%, which is too bad. That said, I’d drink it over Jameson, and the price isn’t too bad.

So, no real introduction needed: Each year Writers Tears brings out a limited Cask Strength version. This one had a run of 1800 bottles. And given that I’ve seen some limited runs be 20,000, I’d say that’s pretty limited. 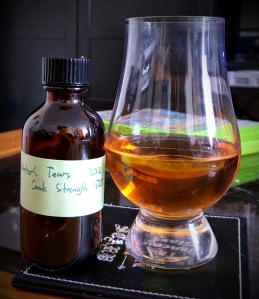 Big ole blast of honey. Like being beside the hive on a summer’s day. Just slaps you with it’s dick and demands a refund.

Big flavours on this dram. Almost like a beefy white wine. Not too complex though, yet… big.

Sweet. Big flavours that were lost before with the 12% Abv. difference. Kinda nutty and different types of fruits pop up. Nothing overtly complex, yet nice.

Also different than the nose. Where as the nose was all blustery, this, while strong, is balanced.

Wow. What a finish. It’s a damn crime the normal stuff doesn’t come close to this. It should be higher than 43%. This is really something. Reminds you that it’s an Irish, however has these earthy sweet flavours that pair really well.

Good finish on this one. And long lasting.

Conclusion: This is a big Irish whiskey. It has some not-so-subtle flavours. The finish actually shows up. it’s still somewhat smooth and great to drink. I enjoy this one, it’s tasty, has some fun flavours, and well balanced.

I think more time in the oak may end up with some complexity, however I’ll have to wait for that.