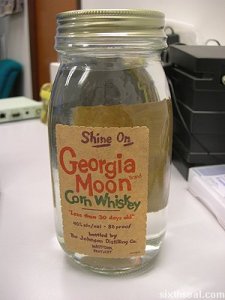 So, for those of you not in the know, there was a /r/Scotch meetup at a local pub known for having a metric shit tonne (metric) of Scotch.

And during some breaks, outside of the bar, /u/Jolarbear and I made a swap. And he included 2 mystery samples.

And I gave him heck…. He was a patient man, and waited for me to finish, and then said:

So… here’s to lowering my overall average. 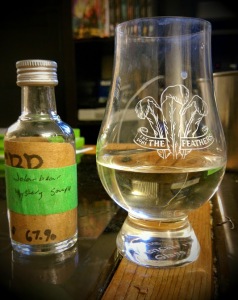 So normally I don’t talk about the colour, however in this case I’ll make an exception. Once I pour this, I guess that it’s probably unaged, based solely on the colour.

I’ve had some other moonshines, so I’m not too worried. That said… it’s going to be rough.

Really faint nose on this. I have trouble getting anything other than ‘old person’. Which, like I’m sure everyone here will agree, just makes you want to put it in your mouth, doesn’t it?

Not much taste. Not much bad taste either, so that’s a plus. And there’s a little bit of flavour…

Not enough to actually enjoy it mind you. At all. But there’s flavour.

The finish is unique, and simple, and not that great.

Conclusion: The flavours are dull, the nose is dull, and the finish gave me a headache. This isn’t that great. Better than the other sample, oddly enough, though still not worth imbibing.