Yes ladies and gentlemen, I’m cross-posting this review across all three of the review subreddits. And why? Because it belongs in each one.

Orbis Aged World Whiskey is a blend of Canadian, US, Irish, Scottish, and Japanese whiskies. It’s so insane, it may just work.

Or simultaneously piss off 5 countries at once. And at least 3 of those are pretty rough when they are angry about their booze. The other two will just snub you and keep our tasty food to ourselves.

This is the first release from the St. James Distillery. This is the first World Blend whisky that has been launched, mixing different whiskies from around the world, some of which were reported as being 15 or 16 years old.

Okay, I get it. Sounds like a gimmick. And there’s not much about St. James or any of the whiskies that went into this, other than the locations. Heck, it was originally launched as a travel retail exclusive, and we all know that I’ve called those out as mostly gimmicks before.

However there’s something interesting about letting a Master Distiller mix and match however he pleases. And it’s nice, as a Canadian, so see a whiskey that included us. We just like to be included.

Alright, let’s see how this tastes before I wax poetic about all of us being one mankind and then singing Kumbaya or some shit. 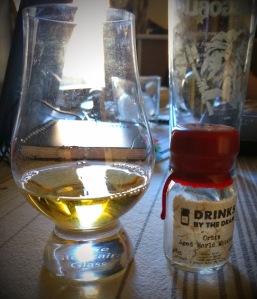 I didn’t know what to expect. And I think I received it.

There’s more than definitely some grain juice in here, and I’m assuming that’s what the Scottish element is. The cereal note kinda screams it out.

However this has an interesting mix of distinctive fruit notes and spice.

Wow. Complex. A lot more complex than a 40% whisky typically is. I’m finding myself really enjoying this.

The US element is the source of the Bourbon like notes. I’m assuming, of course. However it’s quite evident and on the center stage, which is appropriate. Also there’s this sweet plum and almond element that I think I can say is Japanese, however I could be off.

Again, lots of US notes, with the mint and nutty-ness almost being what I find in Canadian whisky however probably not the source. Also some nice spice to this.

Rapini, in this case, means the cooked Rapini you have at an Italian restaurant. It’s bitter and made to pair well with meats. In this it balances out the sweet notes.

Conclusion: I am presently surprised at how much I enjoyed this. It really did seem like a gimmick whiskey made to sell for cheap. However I enjoyed the complexity and mixture of flavours. I wouldn’t necessarily say buy a bottle, because it’s so all over the place that most people may not like it, however I think this is worth a try, if not only to try the first ever World Blend, but also because it’s fun.

And isn’t that what it’s all about?