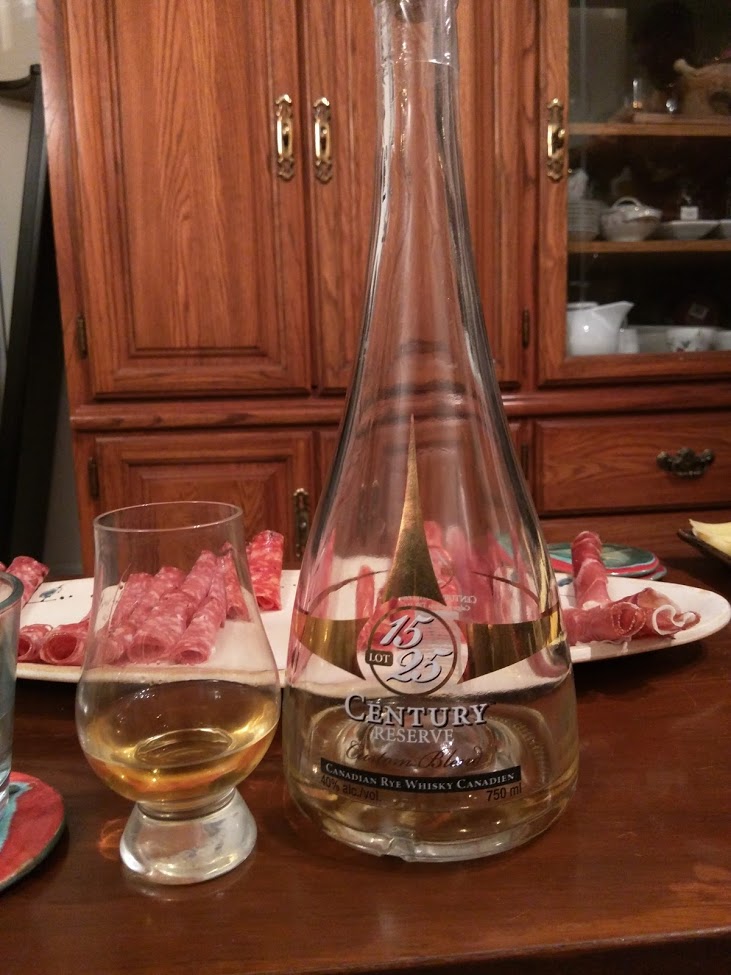 Thanks (I think) to /u/muaddib99 for sharing this dram. And thanks (I know) for hosting the most recent Canadian Reddit Whisky-Nerd meetup.

So we, the whisky nerds, herded ourselves downtown to meetup. Each of us brought the drams of shit we didn’t want anymore.

Well… not really. We brought a bunch of stuff. And we decided on some good, and we shared stuff we may not like. To start we started with Canadians, because we’re Canadian (except /u/kinohead, but he’s hiding from the Mounties, so don’t tell anyone).

I kid of course. He’s hiding from Aliens. At least that’s what /u/devoztold me.

Up first in our cavalcade of reviews was Century Reserve Lot 15-25, made by Highwood Distillers.

It’s 100% Corn Whisky. That’s… that something. And is a mixture of casks that they gasp knew the age of to make aahem superior whisky. Wonders never cease.

Granted they don’t tell you the age on the product, but don’t worry: It’s superior. And has a really, really nice bottle. So there’s that.

But hey, let’s take a moment to say that this could be good. I like Canadian Whisky. And I’ve had corn whisky that was good before. Single grain whiskies are some of my favourites.

Price: Oddly enough, not currently available at the LCBO

Or I could be just hoping beyond all hope.

Ever eat vegan creamed corn while removing your nails? It’s not pretty. Don’t do it.

Alright, a little caramel… and the taste of nail polish.

No, I’m not drinking nail polish. And neither is /u/Jolarbear , no matter what the photos say.

Oh god this is gross.

Finish: Wheat, and a lake’s worth of water

Conclusion: It smells like chemicals, yet the almond was nice. The taste has a spice to it. So that’s nice. And the finish didn’t hurt. So that’s okay.

Otherwise this is garbage. It’s boring and painful, and tastes wrong. And we checked: /u/muaddib99 did not fuck the bottle. Or let it oxidize (the two ways whisky goes bad).

Honestly, if I wasn’t around such amazing people, who I tease and they take as a joke, this would have ruined the night. So skip the whisky, and just keep the people.