Thanks to /u/boyd86 for this sample, way back in June, when we were young and silly, and didn’t really understand the world.

Red Flags. Why are they called that? Well because we did something before and they happened. Which is hard.

Like, take for instance, if I walk down a street in Egypt, and I’m mugged. Should I be safer with my wallet? Maybe. Should I not go down that street? Maybe. Should I judge all Egyptians as thieves? No. However that’s a very common reaction to these types of acts.

We, as humans, are made to gather ideas, see patterns, and make snap judgments. We just need to be smarter than that.

And then Danfield’s Limited Edition 21 comes along. It’s Limited. How Limited? No idea. It’s out of market now, so… I guess there was a finite amount of it. It was $45.10 at one point, however I’ll say:

Price: N/A at the LCBO (anymore)

That sounds good. Okay, so it’s a Canadian Whisky. Who makes it? Danfields? Well… not really. It’s made by The Black Velvet Distillery, best known for showing teens how to get their stomach pumped and that coke can be mixed with things other than Ice. It’s marketed by Williams & Churchill, who even go so far to say they distilled it.

See what I was saying about red flags?

Then it says Small Batch… which means that they wrote Small Batch on the label, as the words have no meaning. That said, it is made from rye, corn, and malted barley in a small batch process.

Also it’s blended before aging. So that’s interesting at least. That last one may not be a red flag after all.

Then it’s passed through a diamond dust filter. Which if I remember right, Diamond Dust is required in Dungeons & Dragons to cast resurrection!

This whisky is undead! Oh god, if it has genitals, my book has come to life!

Or not. That’s just a game after all. Also when you use the above spell, it doesn’t create undead, it brings things back to life, so this is just living whisky. That’s all.

Oh, and it’s 40% Abv… so this super limited, old ass whisky that has diamond particles needed to be watered down, did it?

Let’s see how this red flag tastes, shall we? 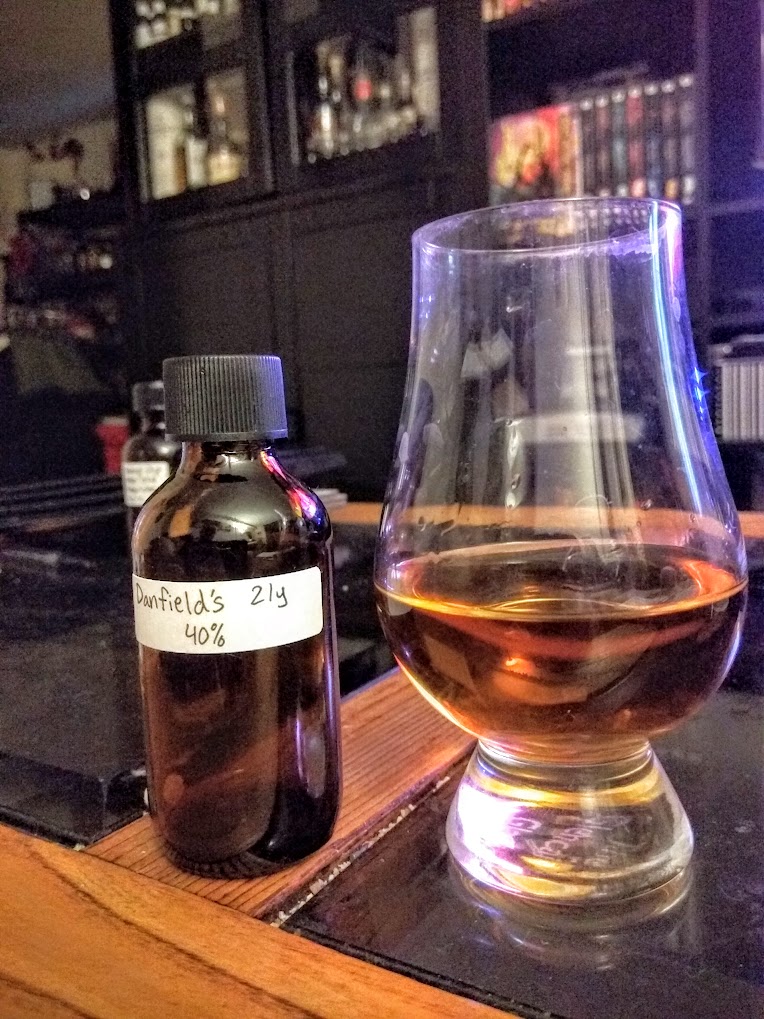 Faint smell. Barely one there at all. Takes a long, long time to coax anything out. I cover it up again and wait, and… still nothing there.

Eventually I’m able to determine it’s alcohol. So… that’s something.

Faint. After some initial flavours this tastes like water. I give it some time. Still watery. Very watery.

Some people wanted me to review water, so… I guess I made /u/muaddib99 ‘s day by reviewing this. It’s even special water: It’s 21 year old water.

Hey, no finish the first 3 sips. A gulp gives me vodka. You be the judge. I pour out most of it.

Conclusion: Now to start off, I’ve read other reviews that have stated differently on this one, so I accept that I may have had some oxidized stuff here.

That said, it’s like vodka. Not bad. I used to drink vodka. Granted I was young and stupid and didn’t know better (for real this time). I didn’t mind it. Had some faint, nice flavours.

This has less faint flavours that vodka. I’ll try to re-review this in the future, however… for now I’m not going to waste calories on this one. Too many red flags, not enough work going into the dram.

One thought on “Danfield’s Limited Edition 21”