Thanks to /u/j4ni for this sample.

I think it’s too easy to call Diageo the Devil. See? I just did that.

I think the real thing behind it is we worry that some of the care and love disappears as large companies venture into our lives. We all love Salsbury Steak (most of us do, at least) yet have had a pretty shitty one from the freezer.

We don’t want whisky to go the way of the TV dinner, is what I’m saying.

However I think we should not ignore the giant whisky makers, because there’s people behind them. People who are fighting and pushing against limits every single day to figure out how to make better products.

So I, for one, want to give them the benefit of the doubt. They’ve specifically tried to do something interesting, though there’s some doubts that linger. It’s low Abv. It promises to be mellow. There’s a goat on the front label (not that that’s a bad thing automatically, just combined with the others it smells of style over substance). We’ve been burned before.

But let’s ignore all of that. For a second, let’s just be interested in a new smoky blend. Something to follow Black Grouse, Johnnie Walker Black/Double Black, and even Black Bottle in our selection.

This whisky is composed of:

So it’s a blended whisky, in all the technical ways possible. Let’s see how it tastes, shall we? 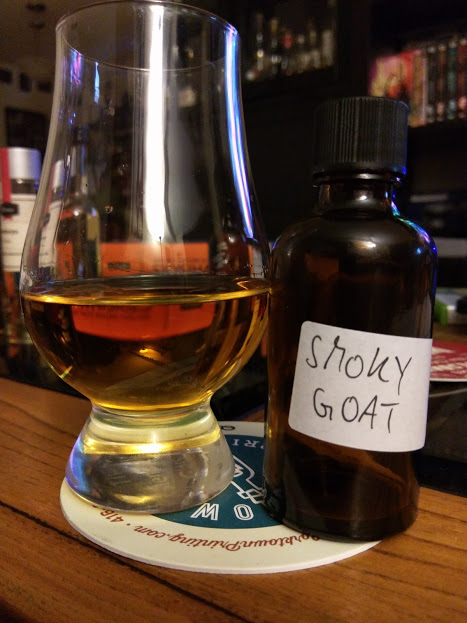 Price: No Goats of the Smoky variety at the LCBO

But is it goat? Not really. Save for the grass, which is the antithesis of goat.

It’s light, I won’t lie. And that worries me. However it does have a nice, pleasant nose, and the butterscotch is a very nice note that steals the show. Not too complex. It’s more like G.O.A.T than goat that way.

No goat, still, however I may pass my G.O.A.T. and then be able to tell the flavours needed for Goat.

Anyway, this is initially quite sweet with an initial blast of smoke. No harsh flavours here, it’s smooth. Nothing too hard to it.

So… smoke. Yeah. And pear and Anise. Only so many times I can make a Fallout reference over and over again.

The end at least has some melon/caramel sweetness to it, and more acidity.I wouldn’t say it wowed me.

Conclusion: So was it a mind blowing experience? No. Would I recommend it to someone? If they were new and wanted something smokey, yes. Or maybe if they liked the other whiskies I mentioned before.

This is marginally better than Black Bottle. It’s smoky and mellow. They didn’t lie, and they put a goat on the front label. It won’t blow away whisky nerds, however maybe it’ll bring more people into the fold, or make a nice Manhattan, or even other Cocktails that I couldn’t begin to list off.

End of the day, I sipped it, it went down smooth, it didn’t have much going on, and I didn’t hate it. So…. there you have it.

One thought on “Smoky Goat”