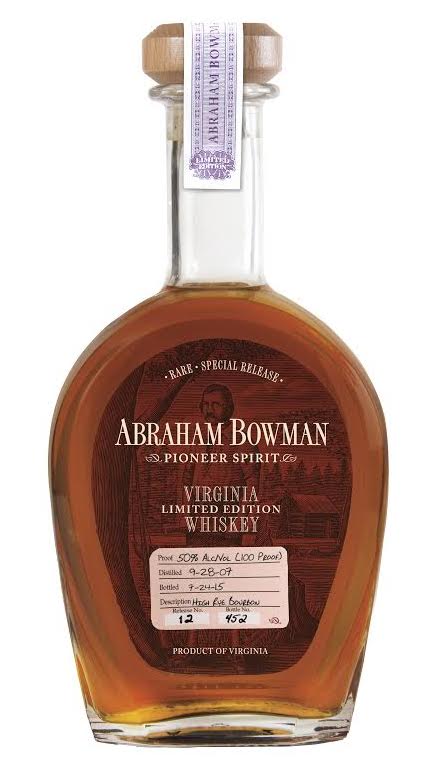 Thanks to /u/dustlesswalnut for this sample.

It is said, in quiet whispers where whiskey nerds gather and chitter like the fey of old, that Abraham Bowman High Rye starts out as Buffalo Trace product.

Hunkered away in secret barrels, surrounded by surly journeymen of yore and the odd uncle cousin, it’s spirited through the night to the A. Smith Bowman facility in Virginia. There, using methods that date back to the countries founding (or whenever), alchemists of different sorts redistill, age, and bottle the final product.

These mysterious booze binders have done many a different whiskey. They launch but a few out to the masses, never giving credence (or clearwater) to the rumours. The dukes of Kentucky are mum on it as well.

Rather than use a barrel or herb of mythical origins, the whiskey smiths at Bowman have given us mere mortals a bourbon that contains “five times more rye” than their standard recipe.

Diviners have read their tea leaves to determine that portents a Mashbill close to 50% corn, 45% rye, 5% malted barley, and 2% eye of newt (some guesses may be off).

Aged for 4 days shy of 8 years, this whiskey shall bring about the end!… of sobriety.

Initial nose brings about the roots of cures mixed with the fresh lambs milk. Sticking in it’s place it the citrus of the Mediterranean, known locally for it’s bright citrus.

As the sun passes the sticky, light smells of the Caribbean mesh with flowering candies. It all has a oily, fake buttery smell, surely put there by alchemists to unhinge us.

A flood of caramel, not since seen here or since, torrents down the tongue, bringing with it uprooted rose bushes fit for kings, and spices destined for aristocrats.

The mages are not done there though. No, a raw alcohol of hooch breathes fire to the tongue, salting the ground and leaving a buttery casing.

Geomancers, feeling left out from the barrage of flavour, unseat dirt and throw it right into your face.

Trees come with it, hampering a short, if rough finish.

Conclusion: Okay, enough Dungeons and Dragons talk. In case you missed it, this has a nice nose with some off put floral elements, a nice (at first) flavour that is too young after awhile, and a finish that doesn’t do too much to help.

Is this nice to sip on? Sure. The end is rough, but short. I don’t like where the taste goes after awhile, however it’s not a total deal breaker. And the nose is quite nice. I like the direction this High rye bourbon went. I’m used to more floral notes, and this one (save for the end) uses them sparingly, giving something different.

Note that I’m not basing this review on price. My score isn’t affected by it because I don’t like to add in price. I’ll echo the same thing said before: This would be a must-buy at $40-50. At the price they asked? I’d probably pass on buying a bottle.