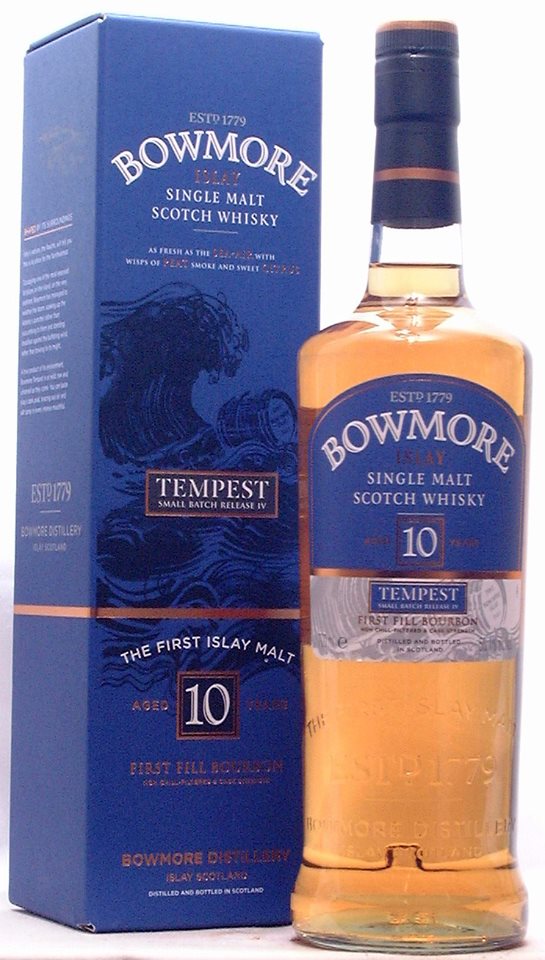 Thanks to /u/Boyd86 for this sample.

Let’s get to the point, for once. Ever. Kinda.

I’m kinda a dick to Bowmore. I know, I know, sometimes they don’t exactly make it easy to be nice. Like the 12 year whisky. However it does affect how I react to things.

If I have a blend, for instance, and it brags about a smokey, Islay whisky in it, and I don’t like it, I usually assume it’s Bowmore.

And prior to having drams outside the standard 3, I was pretty harsh to Bowmore. And while I won’t apologize for that, it has affected my reaction to it moving forward.

That is until I tried Lamrig. And Devil’s Cask. And Tempest.

So I was excited to try Bowmore Tempest Batch No. 4. I had previously enjoyed this limited dram aged in first fill oak for at least 10 years, so I thought “Maybe I was wrong”.

I mean, I know I’m wrong. A lot, in fact. Happens all the time. Usually with my speling.

Ignoring that, this is the Fourth Batch, as you can tell from reading and that number up there. I’d be recommended both the second and first batches, and have been hunting down Batch 1. I’d assume that as batches come out, they get better, like Stagg Jr., so the book with recommendations must be old.

It just must be. So let’s see how this tastes, shall we?

Starts off like Cinnamon Buns. Really nice nose. Reminds me of walking by a St. Cinnamon.

Was expecting a little more complexity on the nose, however the cake and nice amount of notes helps battle that cynicism.

There’s a point in your life where you were eating an ice cream cone and running on the beach and you fell and then set on fire and you remembered that flavour while eating peaches one day.

Oh, that’s not an ubiquitous happenstance for us all? Opps.

Again, I want more complexity from the barrel. Or more here based on the Abv.

I’m a sucker for caramel and salt. So let’s just say I loved the finish at that point.

There’s some raw youth behind this one, sticking around like a cousin who won’t go home. Or when the sun goes behind a cloud on a cold day. Or young alcohol. It’s mostly like that last one.

Conclusion: I can see why the other batches may get more positive press. Don’t get me wrong: There’s some quality to this dram. You don’t put the amount of effort into quality that Bowmore did here and get nothing.

That said, there’s chunks of raw flavours, there’s not enough complexity, and I’d hazard to guess someone ended up being told off for some rough, not as amazing as it’s suppose to be wood in the barrel.

Or maybe they just pulled it too soon, it was a cold 10 years, or the new guy was in charge. Whatever the reason, not the best showing, but not the worst either.

One thought on “Bowmore Tempest Batch No. 4”