Thanks to /u/Schockwaves for this dram.

I saved an odd dram for this milestone. 700 reviews. I’m quite surprised I’m not permanently drunk at this point.

A few months ago, I noticed I had never had anything from Blackadder independent bottlers. And that bugged me, for no other reason than I’m a nerd. I feel I needed to try something from them.

So I asked. And I was responded to, and after sorting through the various genitalia pics, made a couple trades.

One of the drams I received was Blackadder The Legendary 23, an odd dram in a sea of odd people drinking odd drams.

So, what is it? Legendary? Well yes, but what does that mean? Did it fight a dragon? Or at least an old whisky snob?

Neither (unfortunately). This is a blend of two distilleries in the Speyside region. Two of which don’t want their names out their for independent bottling, so Blackadder has stayed quiet.

That said, I’m under no such requirements, so I’m going to say what I’ve heard: This is Balvenie with a Teaspoon of Glenfiddich added in.

Yes, you read that right: A teaspoon. I can’t find anything to support this, it’s just what I heard. It could be more. It could be less. It could very well be other distilleries.

All I know for certain is this is a blend, and it’s just a vatting of two separated malts. Anything else is hush, hush.

So, an air of mystery, and something called Blackadder The Legendary 23? Sounds like a fun time. Let’s see how it tastes, shall we? 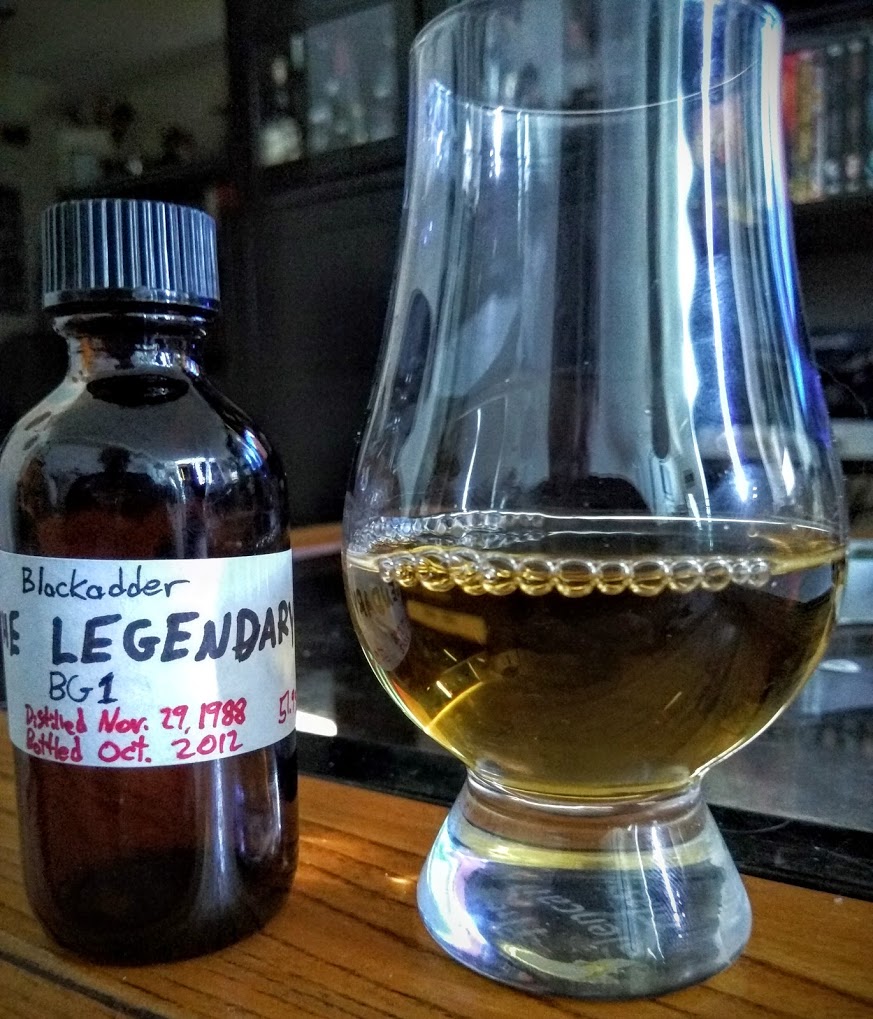 Price: N/A in Canada unless you buy by the 6 bottle case.

Bottled from a: Single Oak Hogshead

Big fruit nose. Huge. Just a light amount of smoke and floral elements. Really enjoy the nose on this one.

The honey aspects lead me to believe the rumours about it being Balvenie. The tiny bit of smoke does as well. This really changes as time goes on.

Quite sweet. Lots of honey. Like “living as Winne the Pooh for 25 hours” amount of honey.

Now, I love honey. A lot. I’m a sweet fiend of the lowest order. But this may be too much. It’s all that’s going on at times.

More honey, yet now it’s a lot more earthy. At first I’m not loving the finish, however… well, it grows on me. Can’t really say why.

Maybe the sweet and earth pair well eventually. Or the brine is nice.

Conclusion: Big setup on the nose, okay taste, and a finish that I like, but don’t love. There’s a fair bit going on with this dram.

I love the nose. Just adore it. It’s old, cask strength, and really evolves. The taste doesn’t follow up to it well. Kinda a let down, if I’m being honest.

The finish tries, and with time is nice, just not amazing. Don’t really know what’s in here, or what amounts are in here, however I think it’s not legendary, just pretty good.