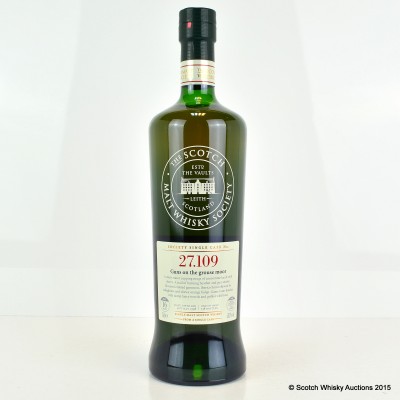 There’s lots of questions to answer and little time to answer them.

Why little time? Because after awhile these things turn into rambling and no one reads them. Mostly due to attention spans and getting to the point.

So, what whisky are we reviewing today? It’s Springbank SMWS 27.109 “Guns on the grouse moor”

What is SMWS? Scotch Malt Whisky Society. They are an independent bottler with the largest selection of single cask, single malt whiskies (in Canada). They are available in other places too. They don’t filter, dilute, or have rivals. Based on the website. They also don’t put the name of the distillery on the product.

So how do you know this is Springbank? Well, I read a website that says it was, so I believed them.

Ah, okay. What do the numbers mean? The first two is the distillery code. In this case, 27. The second two are the amount from that distillery they have brought out.

Making more sense. But what is this gun stuff about? What gun stuff?

The “Guns on grouse moor” thing. Ah, okay. So each whisky is given a name from the original tasting notes. They take the silliest things stated and add them together on the bottle to explain it all.

In this case, a grouse moor is a moor where grouses live… Gee, thanks Collin’s Dictionary.

To expand on that, a grouse is a type of fowl. They are hunted, and to find them you have to go to where they live. Which is a moor. A moor is an unenclosed ground, usually peaty soil covered with heather, grass, etc.

So, extrapolating that, this smells like the grass, peaty moor that people hunt in (with guns).

All that makes sense. What’s a gorda?

Fair. Okay, so it’s rare in using a Gorda because they aren’t used in whisky, due to the size, and typically used for vatting and blending different whiskies. Part of this is due to the max size allowed for Scotch (700 litres) and part is due to the fact you get less wood connection.

However someone did, and we have this one now. So let’s see how it tastes, shall we? 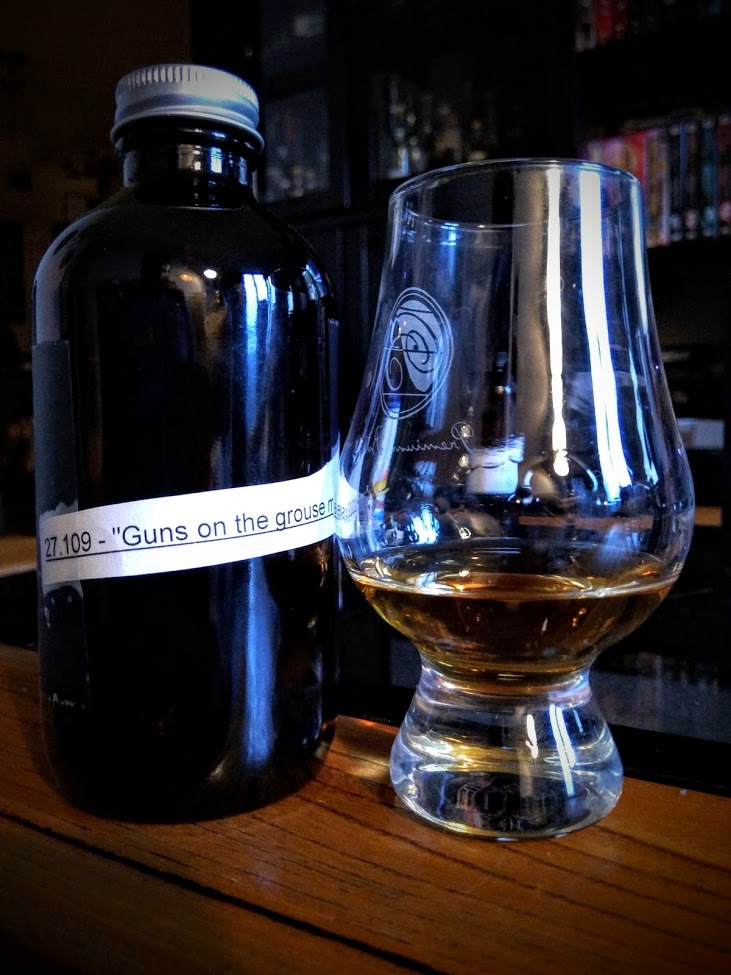 Very fruity, in other words. I’ve read that Gorda’s are used in sherry, so I’m assuming this is an ex-sherry cask. Fair guess I’d say.

I’m usually not smitten by the nose on a whisky, however… well, I’m smitted.

So in reading this you’d note the amount of overall notes have gone down. And personally, that’s too bad. However the notes it does have are full bodied, punchy, and really strong. Especially the jerky.

And I’m a sucker for jerky.

And we’re back in unique country, though, like the USSR, it has shrunk in the past few minutes.

Any peat on this one has really grown into more complex notes. And the bacon… well, I’m a sucker for bacon.

Conclusion: This is a suitable replacement for a Black Arts whisky.

There. I said it. Hate me if you want. This is unique, odd, has big flavours, and tasty as heck. It doesn’t set off memories, yet it’s odd. And the finish is long and tasty and has flavours of things I like (and lemon pie).

This is a must buy bottle. I’m sad and happy I split it, because part of me wants more, and the other part wants others to try it. All in all, a really good dram.