So I’m in Newfoundland for vacation. And I’m drinking Ouzo, Rum, cocktails, and everything else I can have.

However the whisky selection isn’t great. And I don’t blame them: It’s an Island, and Canada has Byzantine laws concerning the Devil’s happy water.

But then, in the deep parts of the city (well… a basement), I find out about a whisky bar. That has a whisky night. With whisky people and whisky food and whisky… sex? Probably not those last two, but whisky.

The place? Why it’s the Underbelly, a place that has a board that survived the massive 1892 fire that destroyed the city. Pretty cool.

Even better: They have a good selection of whisky, and a pretty awesome bartender to boot. Honestly, if they didn’t have the whisky, I’d be drinking her cocktails. And that’s not an euphemism, I mean she’s amazing at cocktails and was a great bartender.

So I’m left with a list. A long list. So I take out my spreadsheets and kill any fun mood to be had while drinking.

Because whiskey is serious fucking business.

But who or what is it? I honestly didn’t know, and basically just ordered it blind. And reviewed it blind.

However you’re not blind. Unless you are, then I’d suggest getting someone with an annoying voice to read this out, to be authentic.

“bib & tucker” is an old saying to describe the kind of clothing people used to wear to special occasions, like weddings.

The bourbon is made by 35 Maple Street Spirits. They source it from someone in Kentucky, from what I can see, as they attribute it to Kentucky more so than California, where they are located.

These are the same people who source Alberta Premium and call it Masterson’s. But let’s not judge them just yet based on that hiccup.

The mashbill is 70% corn, 26% rye, and 4% barley. It’s aged in No. 1 charred American oak. The first edition states 6 years, though is actually closer to 7.5 years, and all others are just above the 6 year mark.

Well… it’s not NAS, they release the mashbill, and they don’t hide that it’s sourced. I like it already. Well, on paper. And I’m mostly acting like that because I already reviewed it, so…

Whatever, let’s see how it tastes, shall we? 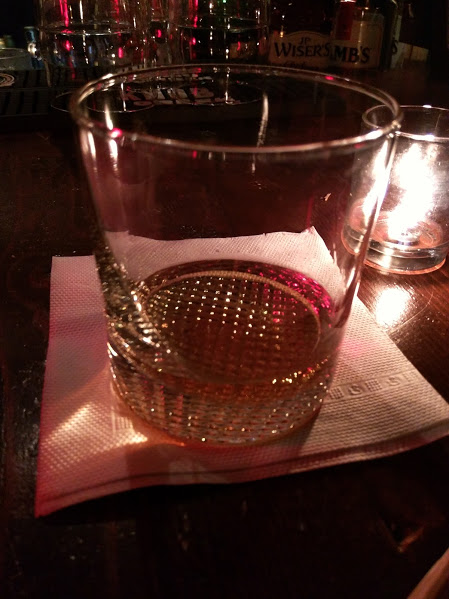 So I took a picture of it in a rocks glass, and changed to a Glencairn later. Don’t believe me? Not really an issue.

It’s light. Not bad light, just quite hard to get going. A little water goes a long way, bringing out more caramel and oat flavours.

Reminds me of Tex-Mex food, but like high end Tex-Mex food. Which I know is an oxymoron. Quite unique. Needs a little more to make me want more, but unique is the best way to put it.

Not blowing me away, but unique.

Conclusion: This is an unique dram. I can’t say I enjoyed it, however I’ll add the caveat that I think others may love it. It’s tasty but needs more for me. Maybe more time in the cask, maybe just more abv, however more is the thought I’m having.

If I was a distiller and I tasted this, I’d hazard to think I needed to finish it off in a Sherry cask. And while that may be against God and country to say, I’m Canadian so I get a pass.

Try this one. See if you like it before buying. You may love it, especially since it’s half the price in the US.