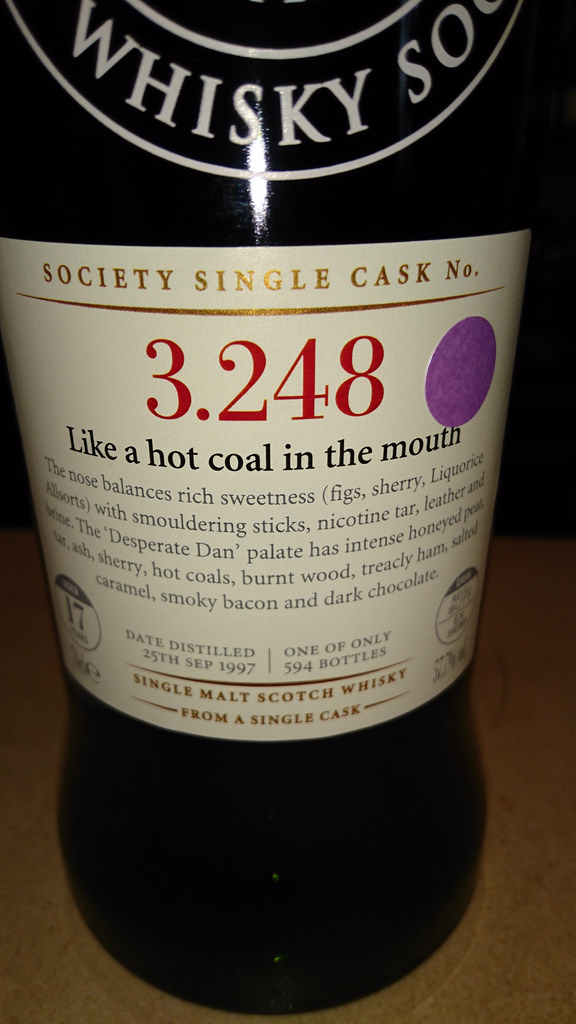 Thanks to /u/devoz for this sample

So it’s me again. With another Single Malt Whisky Society bottling. And another Bowmore.

See, I originally didn’t go hunting for a sample of SMWS 3.248 “Like a hot coal in the mouth”. Wasn’t even on my radar. I’m off swapping for another 20 some odd samples, so I wasn’t going to risk the ire of my wife.

And then /u/devoz was a complete bug and offered me some. And who am I to turn down an offer.

Well, I did. And then he pushed, saying, and I quote “You owe me mother fucker”… Wait, no, that was a different time. He said “You have to try this. It’s different than other Bowmores”

Well no. ~p = squirrel for all I know. And that’s after I setup a logic joke. I mean, come on, a logic joke? Shit, I’m getting rusty as I write more.

No, I had to try it because I’m driven to try everything. And a Bowmore that’s 17 years old and in an ex-sherry butt that doesn’t taste like a Bowmore is intriguing. And if it isn’t, well, you just aren’t looking for fun in the world, are you? 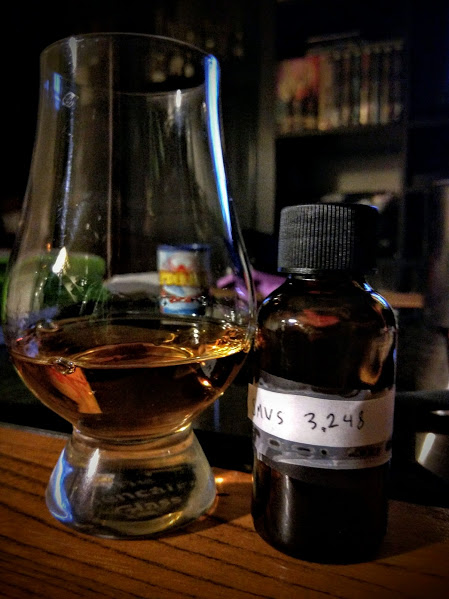 There’s very little smoke here. Rather it’s like the milk after you’ve had Strawberry flavoured “adult” cereal. You know, the kind that doesn’t taste right unless you cry into it because you’re an adult and still eating cereal, but trying to be fun by having desiccated strawberries in it.

Light nose on this one. Takes awhile to really pick up what I’m smelling. It’s certainly different though. No singular anise/smoke trail here.

For the first time in what seems like 100 reviews, the taste builds upon the nose. This is dry, and has the standard spice profile I associate with Islays. That said, I have found Bowmore is more singular smoke with anise touches as it ages.

Instead this has grown to have a different spice element. The sherry influence is nice here. It may have gone over the simple fair of the Bowmore on the taste though, so more points for Hufflepuff on that one.

The finish is where this one shines. The nose was barely there, the taste was overdone by the cask, and then… wow. This finish is the tits. That’s a good thing.

Long, different flavours, and complex. Probably one of the more complex flavours on a Bowmore I’ve had in a long, long time. Big ups for this one.

Conclusion: So how do I score this? It’s almost like I had three different whiskies. Which I’m sure I didn’t, because there was only one Glencairn sitting in front of me.

I guess you, the reader, need to think a little bit. I know, that’s what I am normally here for, however this time just try.

If you’re a huge lover of the nose on something, skip this. If you like aftertastes more than anything else, then it’s a given.

If you’re a “complete package” kind of bloke, it may be a hard purchase. I am, and I don’t know if I’d want a bottle.

If you love Bowmore, then really, skip it. It’s not the typical and you’ll be sad, unless you want to branch out.

Suffice to say, this isn’t an easy score. I am glad /u/devoz badgered me into trading for this. It’s an unique dram.