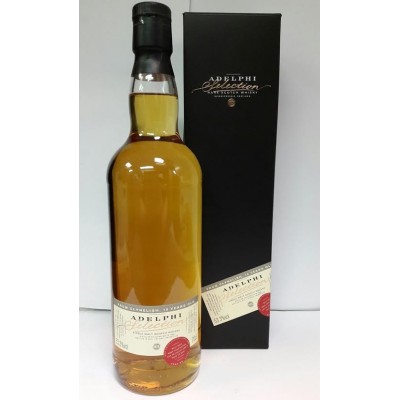 Thanks to /u/xile_ for forcing me to keep trying Clynelish.

Bias time: I’m not a fan of Clynelish. Why? Because their name sounds like mine. Not really. I’m biased because typically I find them to have touches of honey, which I love, mixed with a waxiness that reminds me of the chocolate from Easter that I don’t like.

That said, there have been Clynelish that I do enjoy. And Compass Box seem to use them to such a great ability that I’d be a hypocrite to say it was all bad. Not to mention the good reviews I’ve given Brora in the past (though it’s fair to say things have changed since then).

So when /u/xile_ poured me a sample of Clynelish 1996 Adelphi Selection, I was on the fence. Sure, I’ve basically, at this point, vowed to try every single whisky I come across. But… well, I’m so biased at this point, should I?

So we have a nearly 2 decade old whisky from a distillery that I have hit or miss moments at cask strength. Sounds like a fun time. Granted I’m kinda feeling the booze by now, but hell. Let’s not over think this. Time to see how it tastes.

Less honey here, however that telltale sweetness is present. It’s not saccharine, it’s more so natural, like biting into an apple. As opposed to biting into a chunk of penny candy.

Does penny candy still exist? Does anyone even know what that is?

And yes, there’s a waxy smell to it. I’m supposed to act surprised here.

Very much the sweets, honey, and grass that I’m used to from Clynelish. The melon and the caramel work really well in pairs.

No wax on the flavour. Nice actually. It’s like a dram that should be one dimensional (sweet) growing out of that and adding some dimensions. Like 2 of them.

Spicey, apple finish. Lots of fruit and… shit, the wax.

I don’t know, maybe I’m being too mean to this one, or maybe it just didn’t do it for me. But I’m getting ahead of myself.

Conclusion: Now I can try and explain what I’m thinking. I think if you like Clynelish, then you’ll like this one. For me I kept finding myself looking at the Abv and wondering if I wrote it down correctly.

I wanted more oomph from this. I wanted less wax, but that’s life. The whole thing was starting to get to a point I would like. I still believe there are some Clynelish out there that I’ll be blown away by. This, so far, isn’t one of them. But I think it’s a dram that you should try if you’re a fan of Clynelish.

One thought on “Clynelish 1996 Adelphi Selection”