Thanks to /u/Schockwaves for this sample

I’m not the biggest blend fan.

Hmm… Guess I can’t just say that.and have it be the end. I mean, it nicely states my bias and starts out a review well.

So let’s get to this. Because at the end of the day, I could like blends. And vattings. And vatted malts. And all that other stuff that I put under that title, which probably angers someone.

Hell, if my /r/bourbon posts are any proof, I anger people on a regular basis, so why not keep it up.

Took me a few minutes to find out. R&B distillers seem to be a company that is currently creating two distilleries. Which is quite interesting. And some would say mad. I hope they know what they are doing.

For now though, they are buying whisky from other distilleries and currently blending it. Or aging it and releasing it under the Raasay or Borders names.

So, we notice a batch number to start. And it’s not just a marketing gimmick like Monkey’s Shoulder. These are legit.

Batch #3 specifically has a minimum age of 12 years in it, is made up of 50% single malt and 50% grain. All of the batches come at 46% and are non-chill filtered. All of them come from 9 casks, of which 1 is grain and the other 8 are single malt.

The whole blend is a resurrection of an old blend from 70-ish years ago. They do end up differing from the original recipe, at times, which shouldn’t come as a surprise. You have to try new things.

Which is what I’m doing. Sounds like an interesting whisky, let’s see how it tastes, shall we? 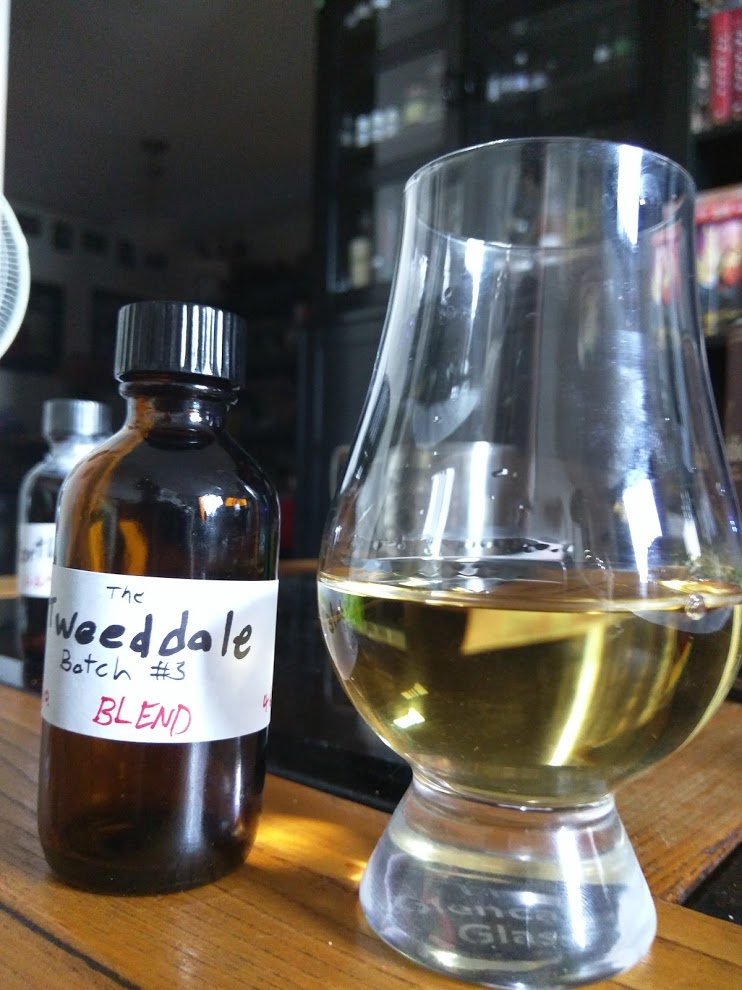 Interesting notes on the nose. If I didn’t know better, I’d say that this had some Clynelish in it, given the lemon and wax elements.

Also makes me kinda sleepy, but I think that’s just due to the smell of tea I associate with going to bed. Which is funny, because Earl Grey has a lot of caffeine, so I have to think back to my childhood and figure out which nightowl in my life was chugging caffeine before my bedtime.

Bunch of nutters, that’s who.

Very earthy. I read that in the upgraded version of Tweeddale, they add quite a bit of Islay. I’m assuming there’s some here too, given… you know, the smoke and general strong notes.

I’d guess it was quite a bit, given the flavour. Or maybe some 10 year BenRiach that was peated.

Finishes with a lot of earth elements. Too many. Took me awhile to recognize the parsnip. It’s an odd flavour to drink.

Granted I’m now crazing parsnips and stole six from cute rabbits on my way to work, but that’s more so because I’m a horrible person, not because I particularly like them.

Conclusion: This is an interesting blend. I like the elements of peat. Granted I’m a peat head, so that’s not really a surprise.

It’s a simple blend. It has some interesting notes, a simple finish, and a nice nose that has a lot of tea elements.

Personally I think it’s tasty, but not mind blowing. I’d probably buy it over a few single malts I could name. Some that also have smoke and peat in them.