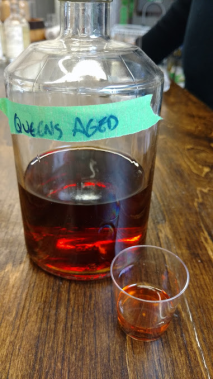 I have cats. And as most people know, when you have animals, it’s in their and your best interest to take them to the vet. Not only when their sick, but also to get them checked out.

I also had a rough as nails December. Don’t get me wrong: December sucks donkey schlong for multiple reasons every year. This year though, it really was rough. So rough that we missed a vet appointment.

This whisky was never released. And based on the size of what’s left in the bottle, doesn’t seem like it’s going to be on the market.

But what is it?

Well it’s a run of just feints (heads and tails). These are the initial and final bits of alcohol that are cut from the distillation run. Distillers who don’t sell them to perfume companies save them up and then do runs of them. And they turn out nice.

That’s all anyone knows about this. Age was in question, but they were able to figure out the proof, mostly, so they served it to the guys.

And one of them was able to get me a sample. His name? Also not Albert Einstein.

Nuttier than other results. Given time, you notice that it’s young, but there’s some nice, strong, molasses and spice notes.

More strong notes. Really acidic. Don’t know how much I like it. It’s somewhere between Highland Park 12 and a young Speyside. Or maybe a white rum.

Finishes with a big beef/smoke flavour mixed with spice and floral. I don’t love the combination, but I think the floral side is more “those flowers need to go” than “great Lowland”, and I’d hazard to guess it’s due to a young age.

Conclusion: This is the start of some really, really nice whisky. It has unique qualities that have started popping up. Lots of spice, good amount of nuttiness. Good characteristics on it.

That said, some of the combinations are strange. It wouldn’t do well at a lower Abv, and frankly it needs the extra time. Or maybe an ex-bourbon barrel, or being peated, or something. It’s an interesting dram, and I could drink more, but I feel like TDC has made better in the past.

One thought on “Toronto Distillery Company Queen’s Own Cask”