Thanks to /u/devoz for the sample of the 16 year.

I’ve recently been asked to stop reviewing bourbon. As such, I sat down and reviewed three of them, with breaks in between. All of them turned out to be ryes, all with different mashbills.

It was fun. You should try it some time.

Today I’m combining two of the reviews into one, as these two oddities are made by those crazy trendsetters at High West Distillery.

Located in Utah, one would suspect that High West was known for it’s sarsaparilla more than whiskey. And I’d love for that to be a rumour, if only so I could buy more and more and more of their offerings.

Alas, it’s not the case.

Rocky Mountain Rye Very Rare 16 and Rocky Mountain Very Rare 21 seem like a slow transition that we’ve seen before. We assume that they had a whole bunch of 16, put half of it in bottles, waited 5 years, and then brought out the 21. Or vice versa.

None the less, having been around the whiskey industry as long as we have, us whiskey nerds assume that it’s the same juice.

Well, the good news is we’re half right. As High West was still sourcing at the time of making this, they did, in fact, source both from Barton.

They did not, however, source the same juice. It’s two different mashbills.

Also: I did try to wait for a sample of the 12 year rye while putting this review together. I have since been told that I may have to wait…. a long time. 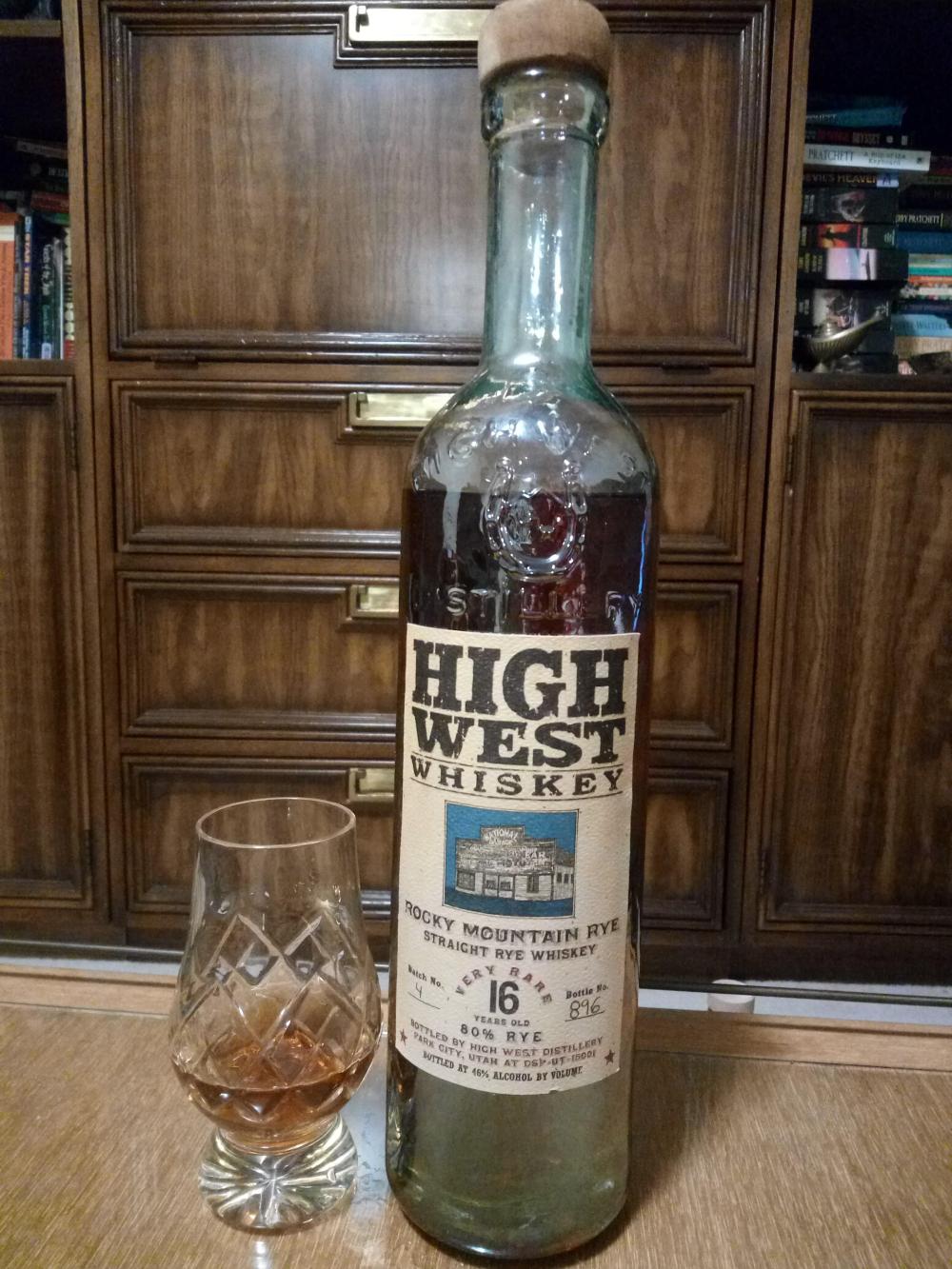 I originally read that it was a blend of LDI and Barton ryes. However I think that was a different 16 year that was gift shop only.

This version somehow some made it’s way to Canada, and eventually devoz, and now I have a sample. For some of you that’s because there is no god. For others you are happy.

So what I can tell is this: It’s aged 16 years, potentially in Kentucky. Most people are pretty sure this is Barton. High West wanted a higher rye amount because currently ryes on the market are at the legal minimum, 51%. This one? 80%. Buffalo Trace? 97%. I’ve had some state they prefer lower, some like higher.

I personally just like them all. Or most of them. Well, not all, as my reviews attest, but I like some of them.

Let’s see if this is one of them

Initial nose has the standard bourbon notes. Eventually a lighter, floral and seed heavy nose is there.

Seed heavy? Yeah, that’s new for me too. Nice elements here, though some parts are hard to differentiate or are just in passing. Needs more definition.

More seeds. I didn’t eat seeds today, right? Well, no. Because I’ve been told to stay away from the bird feeders.

And people always put those rings around the poles so I can’t get to them. Makes my bushy tail flitter about quite a bit.

Nice amount of sweet/butter here. The ginger and anise are lighter than other recent ryes. It’s nice, but again, some flavours are quite fleeting or hard to pick up completely.

Overbalanced on spice. Gone is the seed. Better dig up acorns later.

It’s too bad, this was a lighter rye, and then the end is like liking the inside of a spice cabinet. Woody and too much spice.

Conclusion: The nose is interesting, the taste is seed forward, and overall it’s quite unique. It doesn’t taste like other ryes, and has been given the time to balance for these two aspects. Even though I feel the flavours aren’t quite distinct enough, these two parts are quite nice to sip on.

The finish? It’s not unpleasant, but it does need work. It’s dry, and the spice takes over. It’s too youthful for me. Or rather, it acts youthful, but it isn’t. Or rather it’s unbalanced.

I enjoyed this, but I’m happy to pass on a bottle. Especially at the secondary prices. 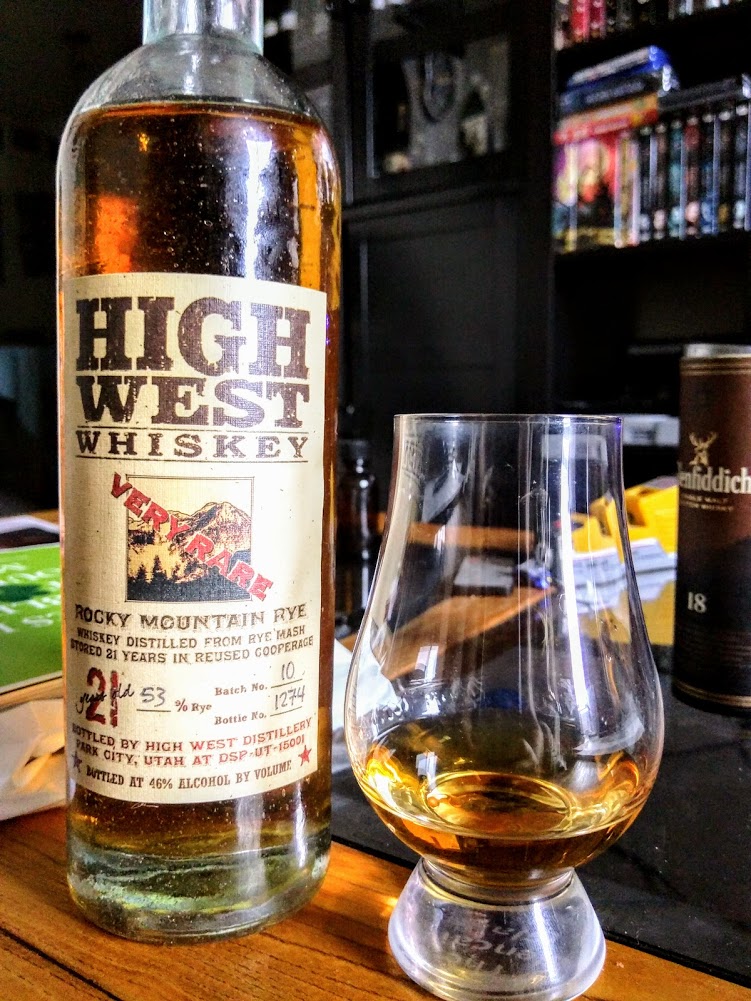 High West Rocky Mountain Rye Very Rare 21 Rye is a different beast. If the 16 was brought out to show a high rye mashbill, then the 21 is to show those other punks who use the bare legal how to do it the right way.

At 53% rye, I can’t help but remember the Irish whiskey method: Age everything for 3 years and a day. Why a day? Because Scotch requires 3 years, and Irish whiskey will always be better (YMMV, mine certainly has).

If 51% rye is the minimum, then balls to the wall and nuts on the road, we’re doing it slightly higher. Also made at Barton, I was lucky enough to obtain a bottle of this. And stupid enough not to buy more.

Let’s see what I’m talking about.

Big caramel notes. Lovely complex flavours. What starts as just floral turns into a chocolate floral mix that can’t be separated more than two cousins at a Memphis BBQ with free drinks.

Lots of interesting notes, and just the right amount of spice on the corners.

Taste: Gingersnaps, nectarine with spices that have been baked, eucalyptus, malteasers

So originally I was going to say something like “baked nectarines that you put ice cream in” but then that doesn’t help, does it? It’s a mix of spice that have been baked, burnt sugars, and fruit.

Nice malt on this. Adds an interesting element, like this is somewhere between a Scotch and a Rye.

And back to floral, in a big way. Lots of sweet, earth notes here. Clean notes too. I’m not the biggest fan of it, as I feel the finish (while long, strong, and…. a guy named Wong? I don’t know) is a little different than the rest. Almost delicate, which doesn’t jive as well.

That said, really nice, specific notes on the finish.

Conclusion: It punches well above it’s abv on this one. Lots of really tasty notes here. Hard to really pin it down. It’s complex, which i feel goes without saying. However it’s still quintessentially a rye, which I love (contrary to some people’s thoughts).

I have to say that the nose took off the most for me on this one. And the taste was really nice and reminded me that you don’t need an ex-Sherry barrel to get those baking spices I love.

While I think it’s interesting and well put together, the finish seems out of place here. It’s creamy, tasty, sweet, and earthy, but somehow the clean notes of linen and digestive biscuits didn’t work for me as well as they could. But that’s nit picking. This is worth a dram. And if you’re rich, worth maybe a bottle. I don’t know, I’m still working on my accounting degree.