Thanks to /u/whisky_lads for the sample.

Found out I’ve been pronouncing “Bruichladdich” wrong for the last 4 years (correct version: brew-ahhk-ah-klah-dee-hk, from their website). I was over-pronouncing the soft “hk” at the end.

Sometimes it’s nice to have those moments where you learn you aren’t king poo-bah of all the whisky in the world and your ego is a little bit too big.

Criticizing things is what my generation does. We write and talk and base our entire lives on what we consume, so at least when we talk about something and dissect it, we feel like we’re making something too. A lot of us work in places where we don’t make physical things (myself included). It’s nice to make a thing.

Thus regardless of score, my hat is off to all the whisky makers. We may not always agree on the quality or score of a product, but I appreciate the chance to drink your whisky.

It’s getting harder to start these things after 27 some odd reviews from Bruichladdich. Soon I’ll just be quoting famous pop songs.

Today I was fortunate enough to try Bruichladdich 20 1992 Old Malt Cask Douglas Laing. This older dram made before the closure in 1994. I don’t know if it was rebarreled or not. So this could be a rough barrel, as the rumors persist, or some juice that was rebarreled (I doubt it was the second one as it ended up at the Laing corporation).

What I do know is I enjoy this distillery. So there’s my bias going in. Let’s see how this tastes, shall we? 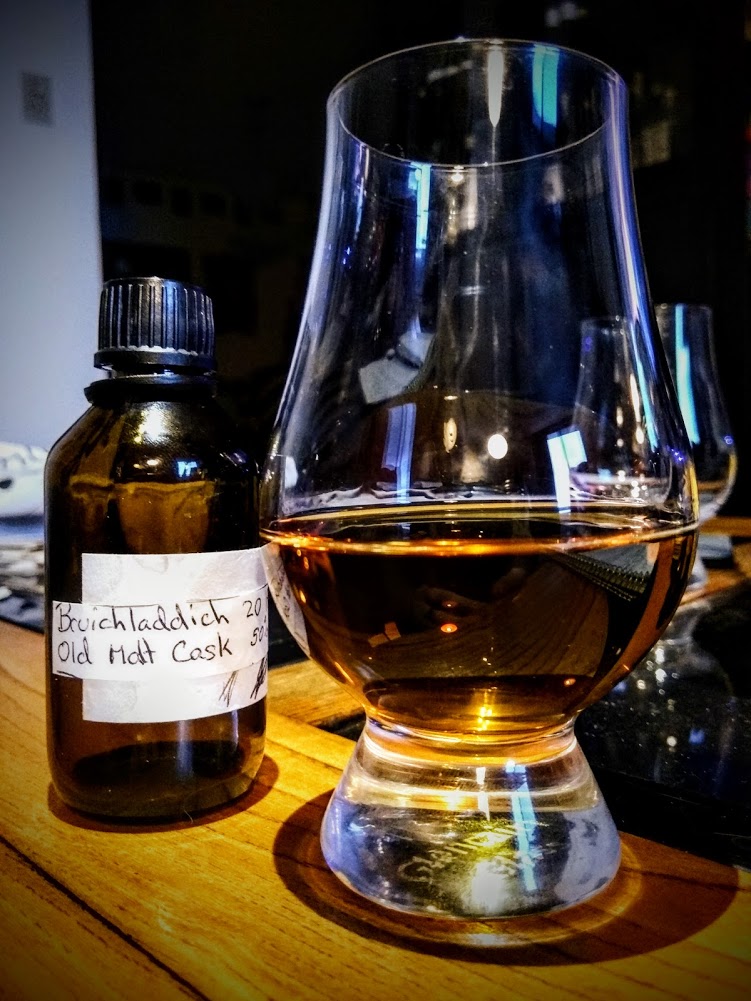 Big fruit flavours. Initial nose has this vanilla/cream note. And there’s some odd brine notes, spice… It’s all quite interesting.

If I had to guess, I’d say the barrel may be on the 3rd refill, and was given a good amount of time to sit. Or I’m full of it, really, I’m just guessing. Not a sherry bomb, is what I’m saying.

Side Note: Nordic licorice is so much better than North American licorice. It’s sweeter, less bitter, and overall made better. So don’t shy away from it.

Root beer is the dominant flavour here. It’s a strong sarsaparilla note, or as the British call it, “that horrible sweet thing the American’s are fattening up on”. I’m a fan, though it is unbalanced towards that complex note. So double edged sword, I guess.

There’s a recipe for butterbeer out there. Look it up when you get the chance.

Finish is a continuing trend of malt, chocolate, and yeast notes. It’s quite tasty, however when I drank this, it didn’t scream Sherry. Granted it’s an inanimate object and can’t scream, but I think you get my meaning.

Conclusion: If you served this to me blind, I’d say it was a unique dram that was unbalanced on the taste, had some interesting complexity, and no off notes. As I drank it more and more I found it almost muted, especially given the alcohol content or the fact it was in a sherry cask.

I think what we have here is an older cask being used to give a dram time to age. All in all it’s just good. I wouldn’t be annoyed to own a bottle however there are better drams from both Bruichladdich and Old Malt Cask. Heck, there are better 20 year old malts from them as well.

It’s odd to say on a 20 year malt, but I think this needed a fresher cask to finish it or more time in the one it had. It’s starting to show promise, but doesn’t quite get there.