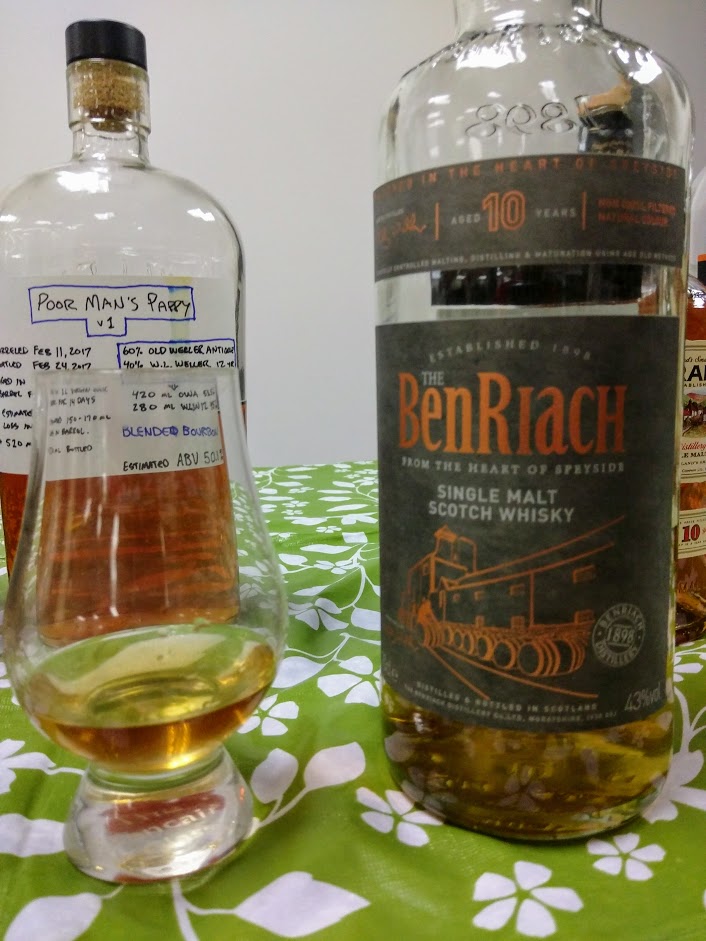 Recently I was lucky enough to join the Toronto Whisky Society in the first of what we hope is a constant amount of tastings.

In order to give everyone a shot at coming out, the entry “fee” was to bring a bottle that was NAS/10 years that was at least half full.

The following reviews are from said tasting, in which I was able to take my time, take pictures that don’t just show off one part of my apartment, and ensure my palate was thoroughly rinsed (with water) between each whiskey.

I love BenRiach. So much so I’m now to the point where I start all my BenRiach reviews that way. I’m sure glad they didn’t just hire someone who’s well known for working for distilleries and ruining the interesting, special editions and creativity and overall quality.

BenRiach 10 is a special edition, of sorts. It’s not in that it’s the standard, opening fair one that BenRiach hopes hooks you in. It is in that this is the first ever core expression comprising spirit produced predominantly since the 2004 takeover. It’s pretty smart and impressive to release something like this.

Also quite ballsy. If, for instance, there’s anything off on this one and the standard fans don’t like it, they’ll end up pulling an Ardbeg and have to dig up. Not to mention fighting people’s nostalgia can’t be easy, so if some schmuck who calls himself a reviewer has done lots and lots of reviews and then ends up trying this, he may be too full of himself to notice how hypocritical he’s being.

Luckily I’m the bigger man. Let’s see how this tastes.

Very fruit forward. At first all I get is nectarine. The amount of acidity changes with time, and there’s some notes of effervescence.

It doesn’t really evolve past there. The youth and low abv. is showing on this one.

Nutty, much more interesting than the nose, and less fruit. No fruit, some would say, but not me. Except there. But not now.

There’s some heat to this, a meatiness, and a caramel note. All the different notes kinda work together save the caramel. It needs helps.

FInish is earth forward at first. There’s some grain/fruit/sweetness that I enjoy quite a bit, and the nuttiness is light and almost cherry like.

I’m impressed by the finish. It’s not too complex, however for what it is, it’s nice.

Conclusion: Certainly not a let down. First off I should correct my bias above: I love PEATED BenRiach and older of either juice (smoked or not). So this was a bit of an uphill battle.

The 10, in comparison to the 12, is less herbal, has a more rounded out finish, and a not-so-great nose. It’s disjoint, young, and overall needs something. I think I would have marked this occasion with a cask strength version. Or waited a few more years. Or made it peated.

As it stands, this was tasty, and a nice entry Speysider. Overall I’ll be buying the Curiositas though.

One thought on “BenRiach 10”