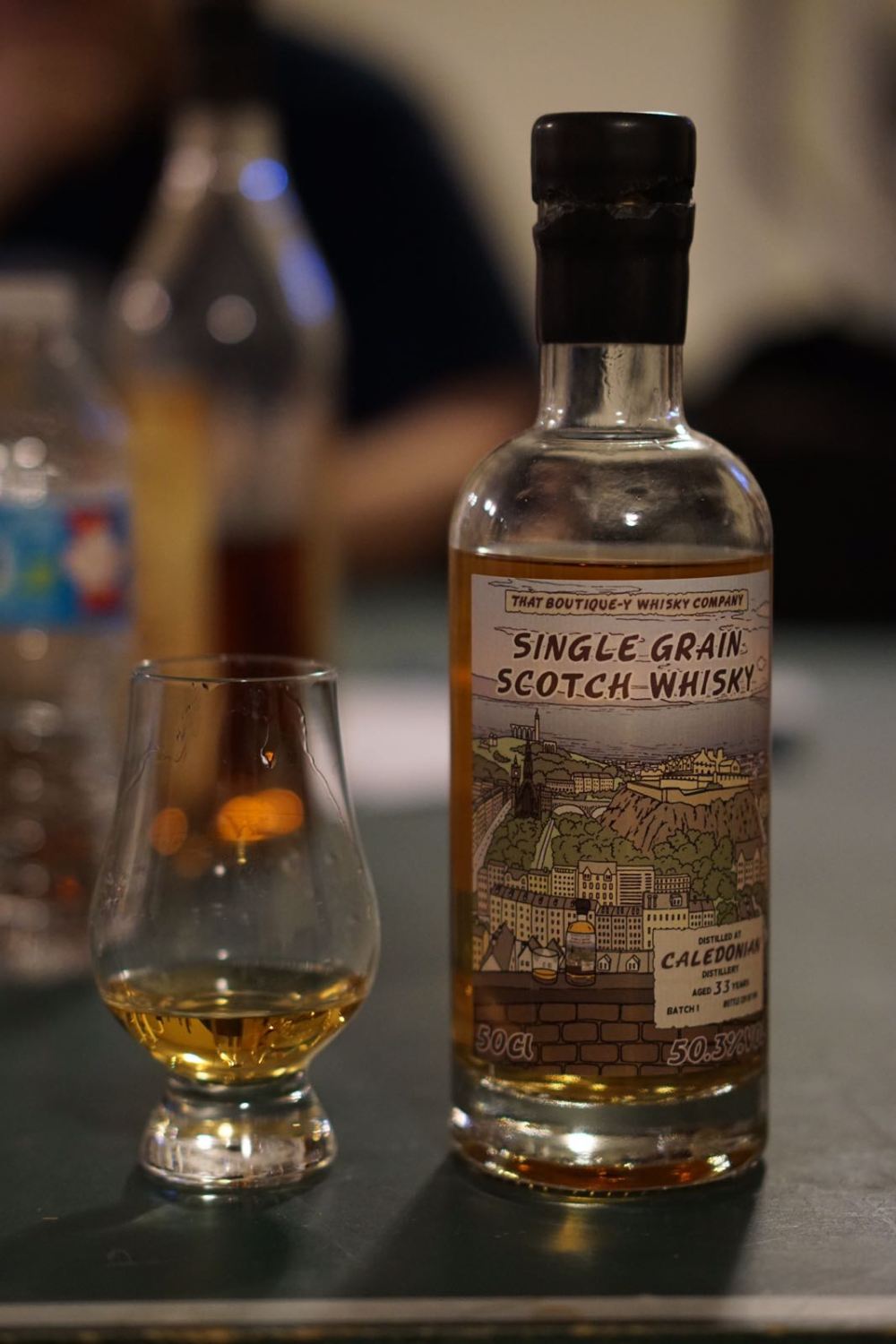 Thanks to /u/devoz for bringing this to a recent tasting.

Single Grain Whisky. Or as we call it in the whisky industry, “How to buy older, odder whisky for a decent price but be confused.”

Why? Well let’s start at what it is: Single Grain Whisky is Grain Whisky that was made at one distillery. The Single, here, doesn’t pertain to the first noun “Grain” but to the the second one, “Whisky”.

Grain whisky is whisky made with grains other than malted barley. Grain Whisky is usually found in blends, good American whiskies, and sad Canadian ones (and the odd good one).

So why does this all matter? Well for multiple reasons.

First off, grain whisky is less expensive to make. Thus you keep some on hand, use it for blends, and voila, cheaper whisky than single malt.

However grain whisky takes longer to take on favourable flavours. Or it needs cask finish(es) to really pop.

So what you end up with are these rare, odd bottlings of high age, low cost whiskies. Today we have Caledonian 33 Old Boutique-y Whisky Company. Tomorrow? Something completely different.

Caledonian by was founded as the Edinburgh in 1855, which operated just one Coffey still and was Scotland’s largest whisky distillery for a few years. They ended up with UDV, who closed them in 1988. The buildings were demolished in 1998.

Well that’s all a bummer. Let’s think of something more fun.

The packaging for Caledonian 33 Old Boutique-y Whisky Company was done by their in-House artist, Emily Chappell. In this drawing, she’s drawn the bottle sitting at Calton Hill, with all the sites you can see from there (including Edinburgh Castle). Of course, the image is on the bottle too,

Thus, inception. Cue the music, slow it down, we need to go deeper. Let’s see how this tastes on this plane on consciousness.

I think I forgot to mention something about Single Grain Whiskies. When done well, they are odd. Heck, when done poorly, they are odd.

This smells like Thai food. Not spicy though. Thai food by ways of a pâtisserie. Meat, coconut, taffy, and lemon filling. Certainly an odd duck, especially since it smells like chicken.

Fruit forward, some spice, and some dry aspects. The full Thai experience is gone (save for the surprise Penis, but that’s not from the whisky) and all that’s left is the coconut, but only after leaving it for awhile.

Sweeter than I was expecting. Also still odd.

Finish has some similar flavours going on. There’s a bitter vein (hue hue hue) that continues here. It’s on the cusp of not being balanced. Granted I’ve been told that my ability to handle bitter notes isn’t the best.

Beyond that, there’s some herbal and wheat notes, but bitter and citrus take the main stage.

Conclusion: Not as unique as other single grains, however nice to sip on. If you buy this and are expecting the complexity of a 33 year old Single Malt whisky, then you’ll be let down.

However as a whisky and one where we ignore the age statement, this has some unique aspects. The taste was fruit forward, but needed more spice. The nose is unique, but I’m not in love with Thai food.

The finish was very bitter. It may work for others, just not so much for me. It has rough spots. If this is indicative of the single grains that came from this distillery, I’m not too surprised they use it for apartments now.