Recently the Toronto Whisky Society was privileged enough to be visited by Victoria Caledonian Brewery and Distillery. They are a newer brewery and distillery who have been making beer and whisky for quite awhile.

However this isn’t your average brand new distillery in Canada. The master distiller, Mike Nicolson, spent 36 years making Scotch for Diageo. They used the services of the late Dr. Swan to help pick casks.

They are currently aiming to release their own single malt in 2019. In the mean time, they bring out beers (which I can’t talk about as I haven’t had them yet) and host guest whiskies that Mike himself made.

Thus they vat two single malts together for 3 of them, which they call The Macaloney’s Heritage Vatting & Twa Cask. Twa comes from a poem called Twa Dogs, which the brewery is named after.

All Vatted/blended malts in this line contain only single malts, no column still / grain whisky.

So let’s see how these tastes, shall we? 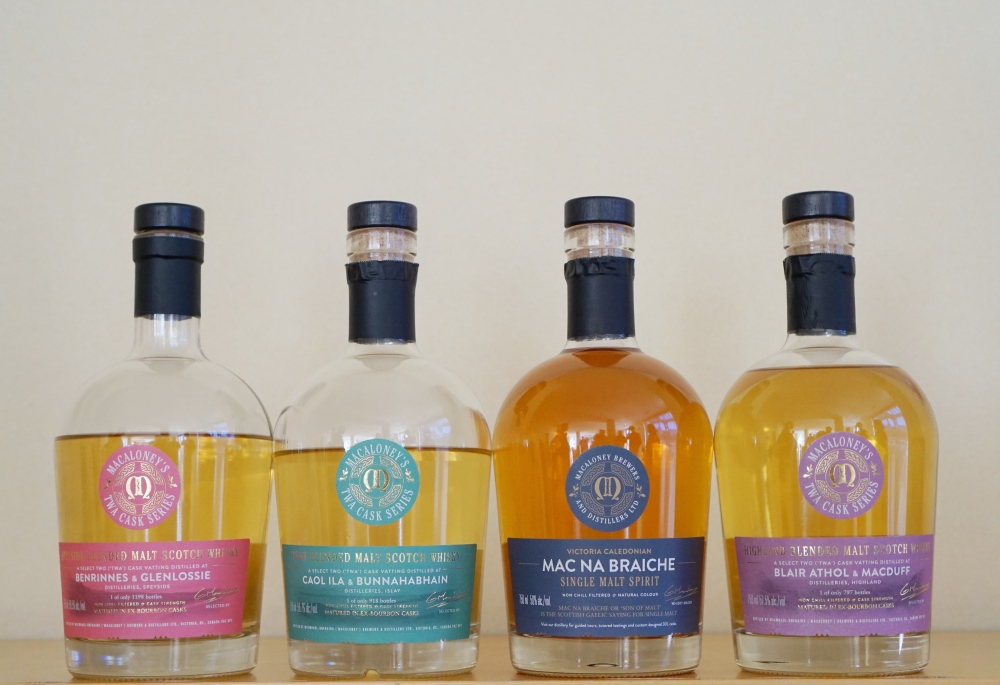 They mix an unstated amount of each and vat then in ex-Kentucky cask to give them time to blend and mature together. Kinda like not waiting for marriage and living together first.

Let’s see how it tastes.

Interesting nose. There’s a little bit of floral parts, some fat, and some cocoa. Almost like a brownie, but not a fresh out of the oven one. And with floral parts. You know, like your insane mother used to make on the “bad” days.

Nice amount of barnyard there. For those of you concerned, there is no rough cardboard notes on the nose to throw you off. I know that pops up with non-sherry Benrinnes, so no worries here, it’s not there.

More floral than I was expecting. Almost like a mixture of Clynelish & Auchentoshan. Good amount of wax notes. Mixes well with the floral.

Lighter than I’d like. Was hoping for the shoe to drop on this one.

Wait, there it is. Nice big finish. There’s some heat, a little water helps with that and goes a long way. More earthy as time goes on versus the taste.

Finish was probably my favourite part.

Conclusion: So these are the two big blends of Speyside, eh? Well they are okay, and this is better than I’d expect a Benrinnes ex-bourbon to be, to be honest. I think they benefit from each other, and it gives you a more floral, light, and overall “garden” dram. Not a dram you drink in the garden, that’d be dirty. More so one you drink to remind you of one.

The taste is lighter than I’d like, but otherwise this is a solid, if simple dram. Good way to start, let’s get onto the next ones.

Macaloney TWA Cask – Highland (Blair Athol & Macduff) Scottish malt whisky is up next. A lot of whisky people I’ve talked to in the past few weeks have stated they are saddened that Highlands aren’t more popular, or rather are slowly disappearing. For me, I’m not the biggest Highland fan, but I can see why others would be worried.

Both of these distilleries were chosen due to their heather honey characters. It’s meant to scream Highland after being vatted in ex-Kentucky casks (see a pattern yet?)

So it’s Blair Athol and MacDuff. I’ve had few of each from the distillery, due to their rarity, use in blends, and very much because I haven’t heard too many good things. Thus I’m a little worried about this one.

Let’s see how it did, shall we?

Wow. Big flavours here. Water is nice, bring it down to 50% (or give it time to do the same) and you end up with an assortment of baked goods with fruit in them.

Which I am stopping myself from making now. Thanks memories, trying to be less fat. Geez.

Butter is the main note. I don’t know if you feel that’s a good thing, but for me, it is. Really nice.

There is a bit of youthful wood note in the middle of it. Shows up like a fart during sex. It can throw you off, but I recommend you laugh it off and keep going.

The finish has the promised heather note, some minerality, and some grassy bits. Good cherry to tie it together, and nice amount of sugar notes to remind you of the nose.

Conclusion: Solid malt, all in all. I was worried, hadn’t had many MacDuff or Blair Athol and hadn’t heard much about them as good, and then given a blend of both that ends up better than it’s parts. There’s spurts of complexity, big butter notes, and the nose was like a bake sale.

The finish may throw you off. I liked it, but mineral after all the sweet could be jarring for you. I want them to vat these even longer and see what amazing can come out of it, because it’s good now, and could be great later.

Macaloney TWA Cask – Islay (Caol Ila & Bunnahabhain) Scottish malt whisky is the one all of you peatheads came here to read about. Don’t lie to me.

So when blending two Islays, it sounds easier than it would be. Caol Ila and Bunnahabhain, for me, made me scratch my head at first. Bunnahabhain isn’t peated (much), Caol Ila is moderately peated (heavily compared to the main land).

However if you think about it, there’s a common ground. Both, like a lot of Islay malts, have salt in them.

So I like both of these distilleries. They put them together in a vat and matured them in ex-Kentucky casks.

Let’s see how it does, shall we?

The interesting thing here is the nose smells like a Caol Ila. It’s not ashy though. The smoke has turned to cocoa, there’s a soap note (kinda floral, kinda fake), and then big pear and caramel.

If I had to guess, I’d say that they kept the nice parts of the smoke and fruit from the Caol Ila and balanced it with the caramel of the Bunnahabhain. Or I’m just being hopeful.

Earth. Lots more than I was expecting. If I didn’t know better, with the spice, fruit, and earth, I’d say it was a PX cask. Luckily I know better. So… there’s that.

Sweeter. May be too sweet for some, and apple and mushroom would confuse some.

And here’s the peat. The rest of the dram is more evolved smoke. The finish has more of the raw side, the fruit side of Caol Ila.

The finish is pure Caol Ila, if I’m being fair.

Conclusion: Interesting dram. After having 12-ish different Caol Ila in the last few weeks, I could taste the Caol Ila the most in here. However I think the Bunnahabhain added a lot more caramel, removed the ash parts, and overall balanced the whole thing.

It’s a nice dram. I like it. I think it should replace some smoky blends and even entry levels out there. It’s fruit, smoke, and brown sugar throughout, quite tasty.