We walk into the Dingle Whiskey Bar. Without gushing too much about this place, it ends up becoming one of my favourite, if not the best, bars in Dublin. I’ll be writing up why later.

And before anyone asks: They didn’t pay me to say that, I wasn’t given any luxuries, and they never even knew who I was beyond my real name and the amount of whiskey I bought there.

One issue happens: I’m jet lagged, tired, full of Irish information from touring the Little Museum of Dublin (recommended stop), and just off of buying a whiskey at the Celtic Whiskey Shop (recommended stop). This causes me to have “Cheese Syndrome”. That’s where I walk into a cheese shop and immediately forget what kind of cheese I like and run out without buying anything for fear of all the options.

Happens in Montreal a lot (recommended stop). So when that happens, my wonderful wife takes over on making decisions. And she opens the flight menu, opens my amazing Google Sheet, and starts asking if there’s any flights made up of whiskies I’ve not had.

We find one. The New Ireland Distilleries Tasting Flight. Good price (think it was €14) for three drams, they have Glencairns (a rarity in pubs/bars in Dublin, as I’m about to find out), and we’re off to the races.

Or rather I’m drinking. So let’s see what’s new in Ireland, whiskey wise.

Up first, we have Dublin Liberties Oak Devil. When I ordered this, I didn’t know what the Libterties were, or what an Oak Devil was. I assumed the whole thing was owned by an American and they were using smaller casks.

How wrong I was.

First off, this is made by First Ireland Spirits, a company well known for making Irish Cream, as well as other independent spirits from Ireland. On the whisky side, they also made Dubliner.

Dublin Liberties Oak Devil comes from the area of Dublin that was outside the city wall, where you didn’t get taxed, but had this bad habit of not having a gigantic wall to protect you. The area was known as “hell” back in the 18th century. The Oak Devil was a carving that used to be there until someone stole it, and legend stating they stole it to use in a cask.

The whisky itself is non-chill filtered and aged in ex-Bourbon casks for at least 3 years and 1 day.

Nice buttery note on the nose. Goes from rich fruit to more distinct fruit. There’s some spice. It’s quite faint.

Mace is the outside of the nutmeg shell that is used for a lighter nutmeg taste.

I think at a stronger Abv. this may have some strong spice to it. Interesting note that I want more of. The dry aspects are nice. Light nose.

Really raw taste, though not too rough. It’s closer to a rye, almost, which is funny because this is a blend of grain and malt, so maybe I’m just on drugs.

I mean more than those you all assumed I’m on.

It’s young, but not too rough. Give it some time for the rougher corners to even out. May take a little time.

And here’s all the spice. It’s Xmas up in here. Good amount of oak and some softer, rounder caramel.

Conclusion: I’m impressed. This is the general, first level malt brought out to make some cash and show they aren’t just scooping manure whisky out of the street. Does that quite well. The nose and the finish are my favourite parts. Easy sipping.

Taste can be a little rough at first, and the finish is very, very spice forward. Unbalanced. However makes me want to try more, and at the price point, pretty good to drink. 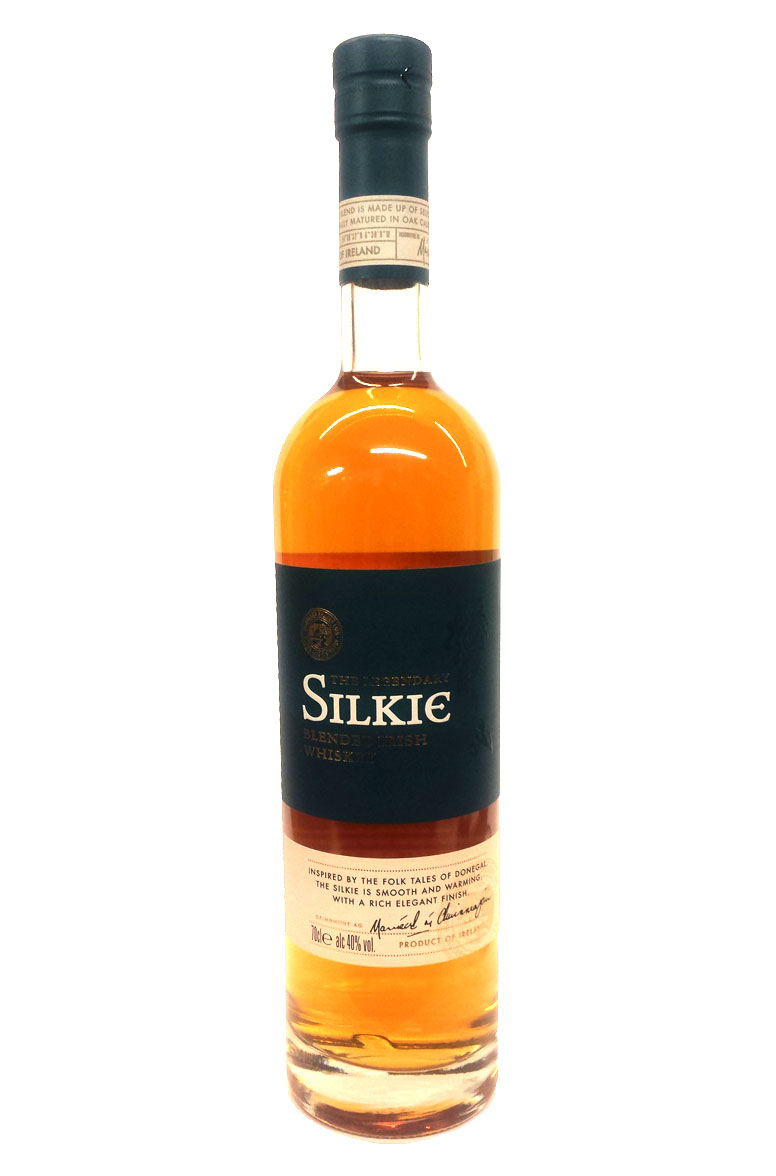 Silkie is the second whiskey of the flight. Brought out by the same people who brought us Green Spot and Yellow Spot, Mitchell & Son, currently the Sliabh Liag Distillery is being built in Co. Donegal.

Sliabh Liag is Slieve League in English, in case, like me, you don’t speak Gaelige.

Donegal is an interesting place for whiskey. Located beside Northern Ireland, we’ll have to see if they follow the Bushmills way of whiskey or the more traditional Republic of Ireland method of whiskey.

So how can they make whiskey if the distillery is still being built in Donegal? Not time travel. That’s rarely, if ever, the answer. None the less, this is sourced whiskey, to answer your question. No idea where from.

I have enjoyed Green Spot and Yellow spot, so let’s see how this one tastes, shall we?

And some sweetness. But mostly fruit.

More fruit, but a little bit of spice and now some nuttiness/buttery notes. It’s quite sweet. Lots of cherry. The spice is nice. Not too much to talk about.

Holy Ginger! Like tons of ginger. And pepper. Mostly both of those.

Conclusion: Not my thing. I think most of the good whiskey went into the other blends, in this case. It’s unbalanced, there’s a ton of fruit, and mostly it’s simple, light, and fades fast.

I can’t recommend this one. I really hope that whomever put it together works on it some more. I get the feeling like it’s meant to just be smooth. And it’s not rough, save for a spice filled end. Hope future releases from Sliabh Liag are better. 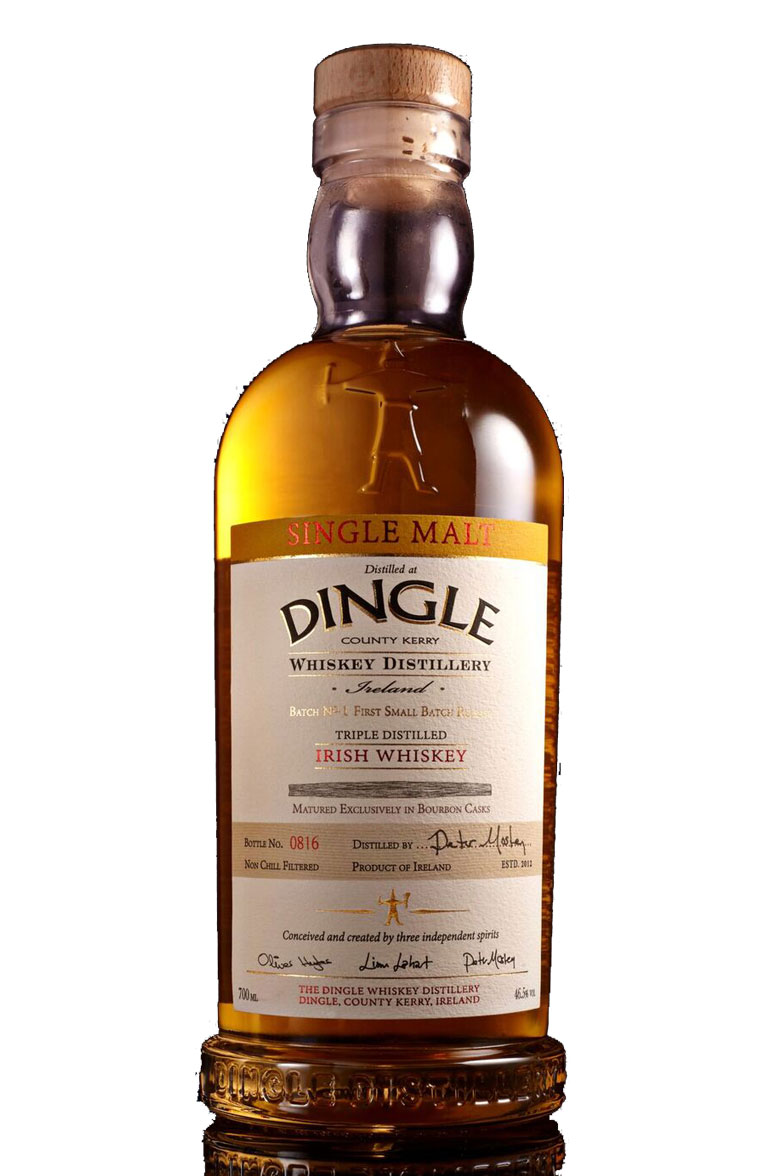 Dingle Single Malt is the first whiskey to be produced in Ireland outside of the big three whiskey makers: Midleton, Cooley, or Bushmills. That’s pretty impressive.

But who is Dingle, other than a distillery who’s name makes me and those with the sense of humour of a 5 year old giggle? Well they are a small distillery. The idea behind their whiskey is simple: If you make a spirit that is nice and smooth, then you don’t need as much time in the cask to even it out.

Now I’ll be the first person to become worried at the word “smooth”. That can be synonymous with “boring” in whiskey. But let’s give them a chance.

The key to all of this is a built-in bulge in the neck of the still. This means it condenses and falls back into the still multiple times. It’s aged in Dingle, to make Dingle definitely Dingle.

Anyone else giggling? Cause I am.

So this is ex-bourbon casks and just over 3 years old. Let’s see how it tastes, shall we?

This one has more of a dough note on the nose that I associate with Irish whiskey. That yeast element mixed with fruit. Lighter, with some butter. Age is noticeable here.

No rough notes. Well, other than dough. Maybe I’ve gotten too used to it from making my own bread. YMMV.

Lots of sweets. Where as the silkie was a simple nose with a simple taste, this one opens up on the tongue. Sweet forward, and some flavours that are kinda unique.

The leather is hard to say here. I think it’s fruit leather, because it almost has that dried aspect.

Finish has quite a few yeast notes. Quite a few. Can throw you off some. Floral, chocolate, and minty. It’s interesting.

Conclusion: So while I appreciate all that Dingle is doing, including the whiskey bar and the gins they make, I think this needs more time.

THAT said, I’m impressed that a single pot still made by a small distillery who only make 2 casks per day can make something like this for their first whiskey. So I don’t think their idea is completely false.

This is smooth. It does have some interesting notes. It’s quite tasty, unique, and interesting. Not my favourite of this bunch, but impressive given the age and where it’s from. Wish I had tried the cask strength now.

I want to see what these guys do next.