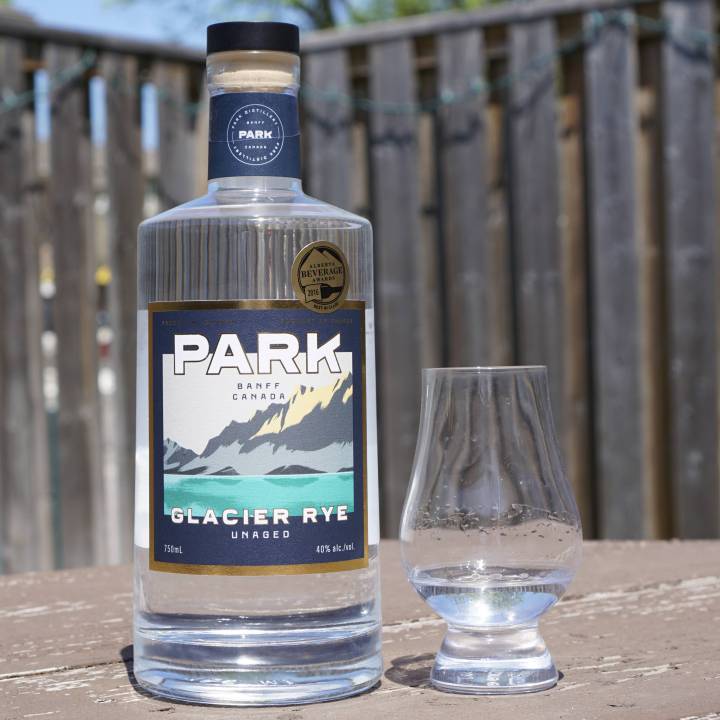 I’d like to thank Park Distillery, Restaurant + Bar for sending a bottle of this to the Toronto Whisky Society.

If you’ve never seen pictures, just look for Lake Louise. The entire area is beautiful. Oh, and expensive. Because it’s beautiful up there. The water glows blue, because it’s glacier water that carved out the area ages ago. It’s a national park, and not just that, it’s one that’s been defended quite a few times.

Park Distillery sources from one of these six glaciers that are still in the Rocky Mountains. They source their grain from Alberta farms in the foothills. They hand-mill, hand-mash, and hand-distill, though don’t expect them to do hand-jobs, they aren’t that type of distillery.

They use, from what I can see, pots stills are used to distill the product. I’m never good at figuring out pictures, so apologies if that is incorrect.

Today I’ll be reviewing Park Distillery Glacier Rye. Currently their whisky is either being aged or is sold out. This is the unaged rye. The mashbill is 100% rye, from what I can see.

I really expected worse. No offence to Park Distillery. I like what they are doing. However this is white dog. I like oak. I like cask influence. Cask influence is the majority of the flavour in whisky.

That out of the way, this is quite interesting. It has a floral element already, which is what I like in rye. It has some fruit before the raw alcohol/cereal takes over.

Again, not a strong, rough flavour. They were smart on the abv here. It has some pear and cheap chocolate notes.

It’s simplistic, though takes some time to get to the point most white dogs do.

Nice amount of floral again, some strong sweet notes, and… earth? Interesting. I’d say that the cask is going to take out the earth as time goes on, and it’ll end up a nice, floral rye.

Conclusion: Let’s be clear on something: Underaged whiskies never have the immense flavours of their cask aged counterparts. I’ve had a few white dogs.

That said it’s quite tasty. There’s some floral and chocolate notes. And a wax mouthfeel that will be great if it carries onto the whisky.

Don’t get me wrong: I’m not reaching for this to drink it normally, however if I had to make a martini or decide what it’s going to taste like once aged, then it’s looking good. I’m excited to try some whisky from Park Distillery in the future, as they have made a nice malt.