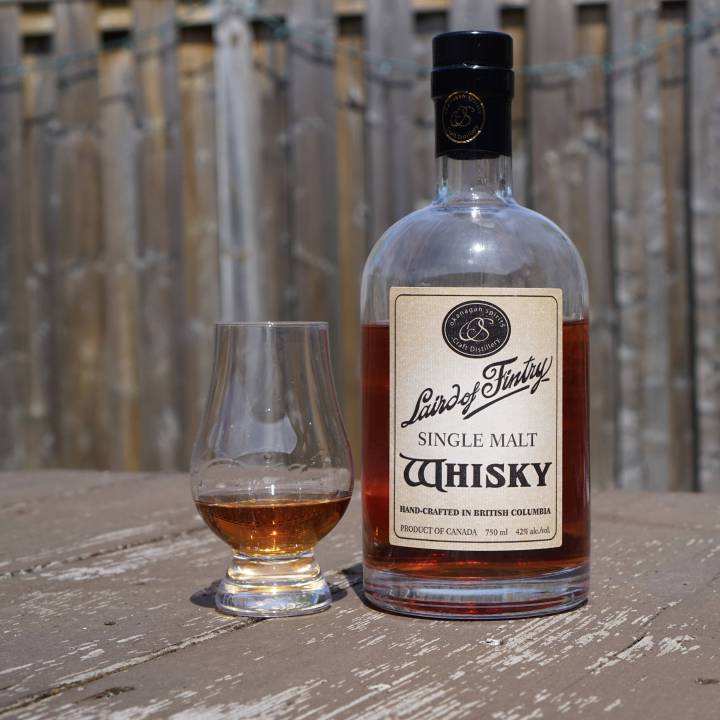 Thank you to /u/Devoz for the samples of this one, and thank you to the Toronto Whisky Society for including this in the tasting (so that I may enjoy it).

Wait a second. Before you get all excited, remember we’re talking about Canada. You know, the place that brought you “light whiskies because the market wants them”, “oops we poisoned people by saying we were Irish whiskey and making actual poison and selling it to Americans during prohibition”, and my favourite, the cantankerous tagnut that is the LCBO who believes charging extra for mid range alcohol stops alcoholism while pushing the market to shitty spirits… that actually cause alcoholism and punishes us..

So keeping my illustrious countries alcohol history in mind, Okanagan Spirits (who I should mention are doing a great job contrary to where they are located and my mini rant above) was started in 2004. They started with the idea of using 100% locally grown fruits and grains.

Cue “No you know” music.

Since 2004, when we were all thinking “How could we have a worse guy in charge of the country next to us” and before Donnie said “hold my crystal, watch this”, Okanagan Spirits has made quite a few spirits, including more than 25 internationally awarded spirits.

This includes absinthe, vodkas, gin, and what you’ve been waiting me to get to, BC’s first Single Malt Whisky.

Made with North America’s tallest copper pot still, at North America’s only World Class rated distillery (as of 2013). Laird of Finitry Lot 4 is the 4th version of this whisky, which is produced in small batches using malted barley from BC (that stands for British Columbia, which is like Columbia but the rent is a lot more and the drugs aren’t as destructive).

How do you buy it? Well you have to wait for the lottery, once per year. It’s NAS, however I’ve heard some releases are 4-5 years old. It’s aged in French and American oak, is non-peated, and is finished in ex-red wine barrels from the same valley.

Oh, yeah, Canada has wine too that’s pretty good. Not that anyone has tried to help them out since Trudeau (the older one).

Finally the name: Original James Cameron Dun-Waters (imagine those movies, John Waters and James Cameron’s love child) was the ‘Laird’ of Fintry, BC, and once ordered a special batch of personally labelled Single Malt Scotch from Scotland. Thus the bottle is a replica of that label.

But enough jibber jabber, let’s get to the whisky!

Price: $75 CAD from the distillery

Very brandy like, perfume notes on the nose. Very fruit forward. Reminds me of a fruit brandy, if I’m being honest, but without the caramel or brown sugar notes.

Granted I don’t normally drink brandy, so maybe I just triggered someone.

Nice amount of peach and spice, like the brown sugar, though it’s a little light. Wish that they could afford to up the Abv, as I feel a lot of the fruit is being lost here. And the mouthfeel isn’t blowing me away.

Wow anise/herbal bomb. Doubles down on a lot of the spice, and it’s unbalanced. Who’s in charge of this, me when I make a pumpkin pie?

Honestly kinda rough. Needed some of the fruit, but that’s long gone.

Conclusion: Nice nose, okay taste, finish that smacks you with a Chinese 5-spice salesman. In the face.

I’ve heard this is the weakest of the batches, and I’m willing to believe that, as I’ve read the fruit continues more on the others. This one seems to be missing pieces from each step. Brown sugar on the nose, more fruit on the taste, and any fruit on the finish.

I’m happy I ended up with Lot 2. Maybe I should open that soon…

All in all, I’m hoping that future releases can be at least 46%, as I feel that would amp up the complexity.

One thought on “Laird of Finitry Lot 4”