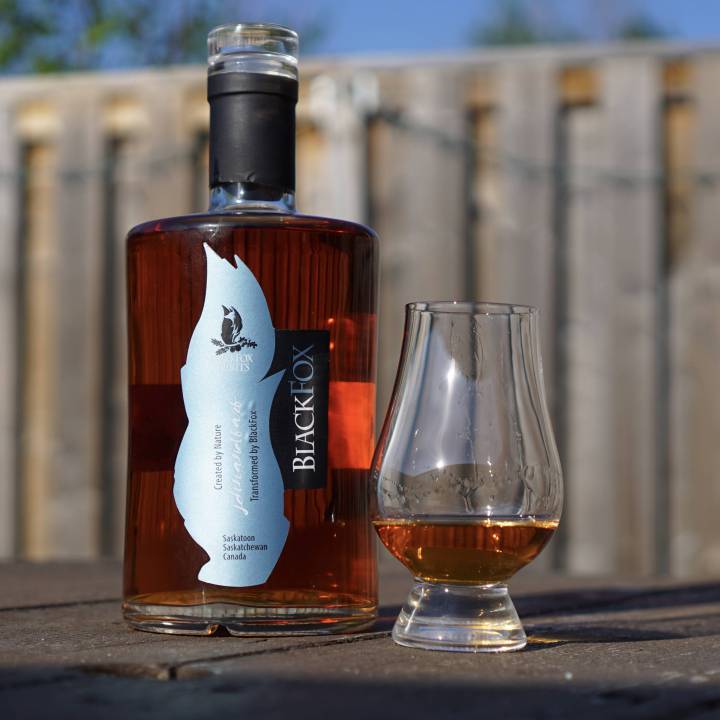 I’d like to thank Black Fox Farm & Distillery for sending this bottles to the Toronto Whisky Society.

Black Fox Farm & Distillery is a farm in Saskatchewan that, from what I’m seeing, originally specialized in flowers. My knowledge of flowers goes so far as to be able to identify their colour, if the mix is pleasing to me, and the specifics of how some of the more popular ones smell. As such, I’ll let you decide if they are right for your flower needs.

In 2015 the farm was built with flowers as the first step in the business. The next step, for them, was building a distillery. I’d say that’s a tad odd, however I think back and want more distilleries to be built, so I’m fine if all the flower farms made distilleries. Thus instead I’ll say that’s normal and everyone should do that.

Thus they grow grain, fruit, and honey (well, harvest honey), keeping conservation, sustainability, and self-sufficiency in mind while making their spirits. Anything they don’t grow is sourced locally from farmers they know and trust.

They make their own alcohol and do not source from anyone else. They own a still that was handmade in Southern Germany. From the pictures I believe it’s a column still, however the pictures have some artistic angles to them, so it could still be a hybrid.

Currently you can purchase various liqueurs, vodkas, and gins from Black Fox. They are currently aging their Black Fox Single Barrel Wheat Whisky, and as such, it’s not for sale yet. However they were nice enough to bottle some of they young spirit for us, and we appreciate that.

This is a wheat whisky, and it’s aged in new oak. It’s still young, so this review is more to look into an idea of what flavour profile the spirit is going to have at first, and if it takes to the oak at a young age.

Price: Not yet available

Strong yeast nose on this one, as well as some strong ethanol notes. Quite interesting though: They have some fruit coming out already, which is nice to start with. I’m assuming a strong yeast strain or maybe hotter fermentation? Either way, it’s nice, and the strong vanilla notes from the craft cask are pairing well.

Don’t get me wrong though: this is still quite young, and the ethanol is going to need some time. We need an Ocean’s 11 amount of Angels on this one.

Again, alcohol dominant, but that’s going to happen with only 1-2 years in the wood.

Nice amount of fruit again. It’s mostly wheat and alcohol, but the virgin oak and a lot of the vanilla are really working hard on this one.

Little rough around the edges still. The finish is coming along, however as I’ve said before, it’s still working and needs time. The wheat aspects are taking front stage.

I’m really getting an Irish whiskey vibe on this one, with the yeast and breadiness. Quite interesting.

Conclusion: It’s still quite raw. The flavours that I’m really enjoying is their malt pairs well with a good virgin oak cask, taking those coconut, vanilla, and spice notes well. It also reminds me of some Irish whiskey I’ve had, however it’s going to need some time to go from “a mouth full of bread” to “a delicate, interesting whiskey”.

Nice amount of fruit here. It’s still somewhat wheat heavy, however not as cereal heavy as others can be.

I’m rating is as a hot, still not ready whisky. However I’m impressed as to what they’ve teased out of wheat whisky. I hope it continue to develop more of the fruitiness, and look forward to trying it once it’s ready.