Thanks to /u/cake_my_day for two of these samples.

Douglas Laing has an entire division devoted to the idea of taking two different whiskies from different distilleries, blending them together, and making something new.

But not just two different whiskies. Two different single casks. All done for, and I’m quoting here, “a bit of a laugh”. They don’t add colour, chill filter or anything like that. Nor do they tell us the amount mixed of each one. It’s two barrels, blended together, and launched to see what happens, all while tittering to themselves.

So let’s see some of these offerings, shall we?

Up first we have Macallan & Laphroaig 9 Double Barrel Douglas Laing. I mean… there’s Laphroaig in there. Young Laphroaig at that. Versus a company that brings out a Scotch that isn’t know for doing anything too bombastic.

However there’s no red to it. Is this non-sherried Macallan, perhaps? Maybe it’ll surprise us.

Interesting. Perhaps I was incorrect, there may be sherry here. Starts out fruity, wood forward, and ends up having some of the peat and making a sweeter, chocolate note.

Eventually the Laphroaig takes over, but not completely.

It’s interesting, and I like young peated whiskies. However this is suppose to be a mixture with Macallan, and other than the peach drink note (which honestly could just be a sherry cask), it’s not showing me anything else.

Finish is lots of pork, peat, and earth. Tastes like a young peated whisky. No idea what the Macallan is doing here. Probably the pear. Maybe. I don’t really know.

Conclusion: Macallan shows up for the start of the nose and then calls it a day. The rest is Laphroaig. Young Laphroaig. Strong, young, powerful brine and peated Laphroaig.

I’m not going to lie: I’m a sucker for a peated whisky. And this is that. So I’m happy with drinking it. However I’m also someone who is going to somewhat expect something based on the name. If the name was “Totally tastes like blueberries, we swear”, then I’d expect some blueberries. And this has a little bit of Macallan fruit then nothing. So while it’s okay, just buy Laphroaig instead.

Highland Park & Bowmore 10 Double Barrel Douglas Laing is up next. We have a company that uses sherry, sea air maturation, and slight peat added, and the other is an Islay that is known being nice in IBs and not so great in OBs. See my previous posts for more on that.

So Bowmore has some strong peat notes, typically with that being the main flavour. Highland Park has multiple flavours all at once. So these are two opposite end whiskies. Let’s see how the blend does. 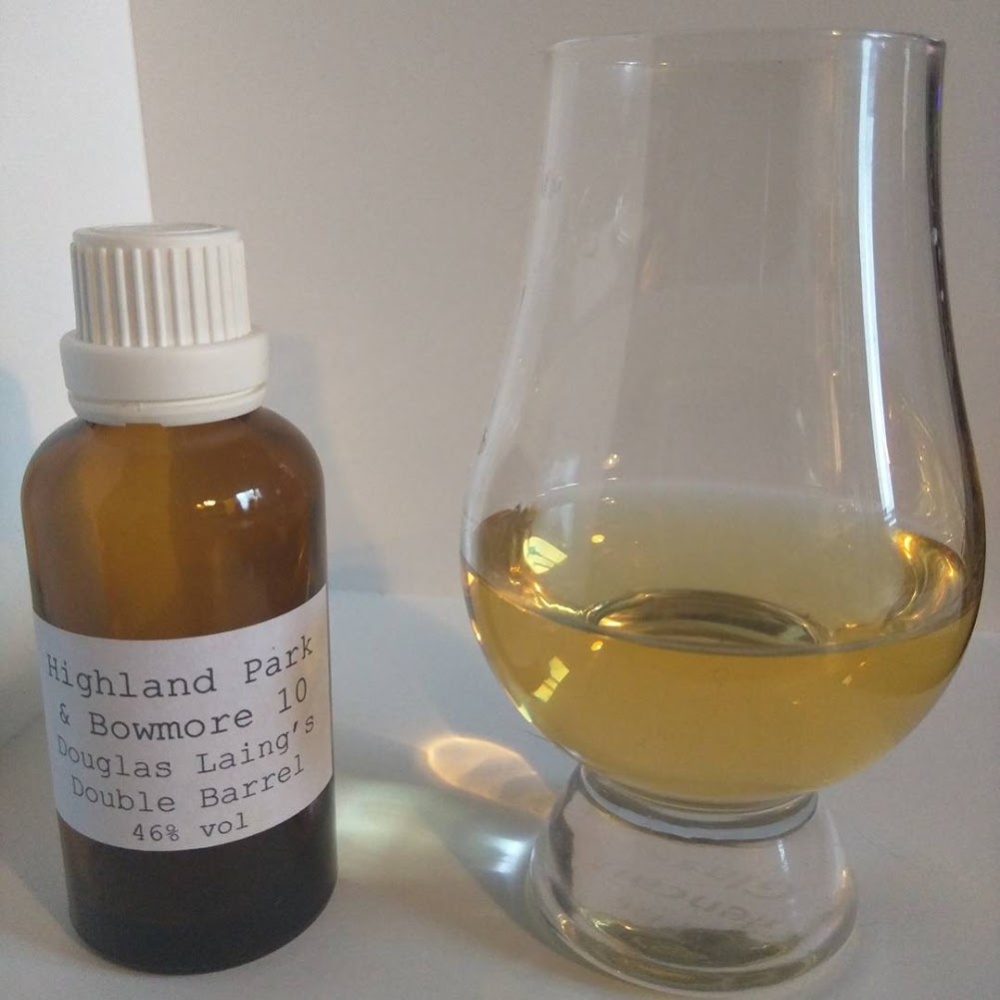 Lots and lots of pear here. Takes a long time to get to any element of peat. Remember both of these are peated, so that’s odd.

It has quite a bit of fruit and wood polish notes. Not a huge fan, too much pear.

Takes some time, however eventually you get a nice cake-y, lemon filled note. Takes awhile to get there.

Again, any peat here is anise. It’s fruit and anise again. Not overdone on pear now, however it’s quite simple.

Not easy to discuss this one. It’s more of a brine bomb than a peat bomb. Lots of spice at the end, no fruit now.

Conclusion: Yeah, this whole thing needs work. It doesn’t have the huge peat of Bowmore, nor the balanced/acidic notes of Highland Park. It’s fallen somewhere in between, and not been that great. Lots of spice, lots of fruit, and a caramel vein that’s forgettable. Also too much brine for my liking with little to balance it.

It’s not horrid to drink. Just needs some work to live up to the standards both of these Scotches have set.

Caol Ila & Braeval 10 Double Barrel Douglas Laing is last. Caol Ila, the ash filled Islay that everyone has had and that I personally peaked at the Cask Strength official release. And Braeval, the one that everyone is Googling when it comes up. Normally Braeval shows up in Chivas as blends.

The nose is quite Caol Ila dominant, however… there’s some Braeval here. From what little I have had of Braeval, the green apple and the extra lime is coming through.

Like a half-peated Caol Ila. Who ends up being the potions teacher.

More lime. More graham cracker and butter. The smoke comes later, is light, and has more meatiness to it. I’m quite impressed, this has some interesting sides to it.

Almost like to opposite whiskies working well together. Who’d a thunk it?

Oddly enough, I think a little less Caol Ila would have benefitted the finish. Odd because I’m a peat head, not odd like “why did I grow a tail” or something.

I like the citrus side, as they are sweeter and more developed. The brine/spice/ash isn’t helping it.

Conclusion: The best of the bunch, if I’m being honest. And I am, because no one sent me hookers to review these. Hookers add extra to the scores.

This takes an established idea of Caol Ila and adds to it. I’d say the Braeval, being something typically used in blends, lends itself well here. It doesn’t take over, and builds up the parts of Caol Ila that I enjoy.

The finish was the only somewhat let down of the bunch. It was going to be a pretty good sipper, and then the Caol Ila smoke didn’t jive as well. Or maybe needed more time. Perhaps next time use an older Caol Ila and the same age Braeval.

Or whatever, I’m not your mom.