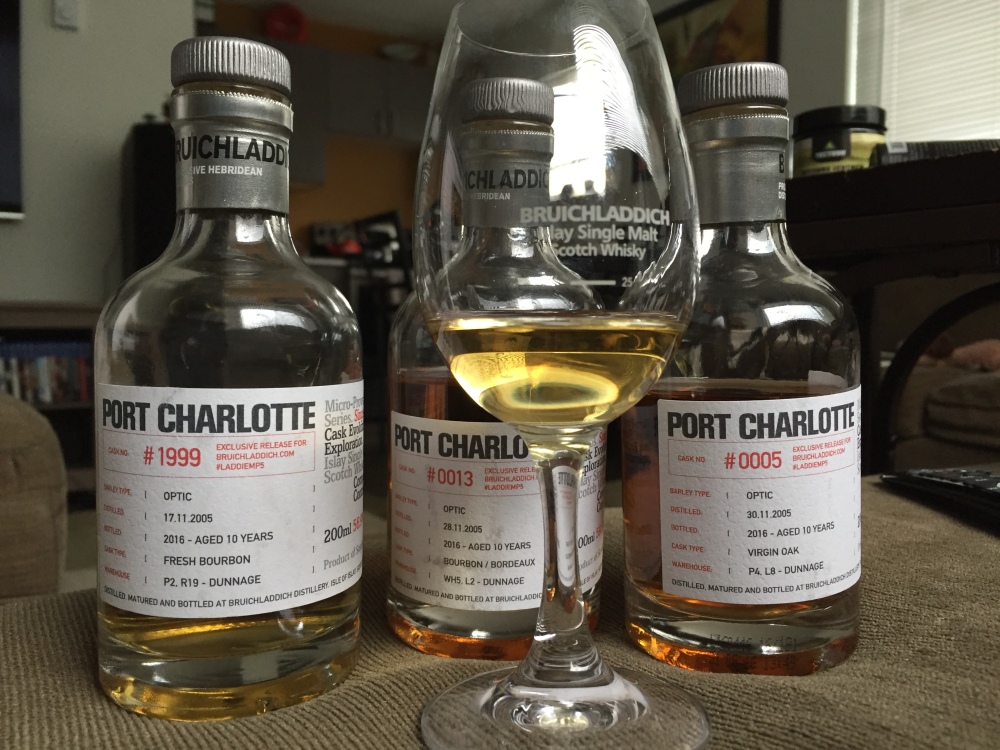 Thanks to /u/throwboats for these three samples. And I stole his picture for them too. And then I used some of his sugar for my tea. While he nodded off for a second.

Wake up people! With all the things that are happening in the world, it’s the New World Order taking over!

What? No, I’m not talking about recently political upheavals, major tragedies, events, or any blame on any specific race. I’m not a bigot. Nor am I discussing frogs sexual preferences.

I’m talking about the fact that there’s a group of Bruichladdich that’s sold through hidden channels to individuals in countries that allow sales of such type. All of this so they can enjoy even more selection from an already hyper prolific company like Bruichladdich. To what end?

Probably something to do with frog sex.

So suffice to say I only recently learned about the Bruichladdich Micro-Provenance series, and rather than state I was wrong, it’s better to blame the whole thing on a conspiracy.

That way I don’t have to grow as a person.

Satire aside, the main connection on these releases is they are all single casks and are all web exclusives. Unlike other web exclusives they actually sell.

Each of these were distilled in 2005 and bottled in 2016. They have different casks, so let’s see how they differ to see how the cask influence is upon a dram, with all other elements kept in check.

Nice amount of cinnamon and pears. It’s well integrated. Very surprised they were able to build up a complexity like this after only 10 years.

Granted it was a “fresh bourbon” cask. Which I’m assuming doesn’t mean first fill. Or maybe it does. None the less, it had good to give, and gave us what it did.

I’m a poet sometimes. There’s a sharp tang here that draws you in.

Still has some of that sour tang, though not as complex as the nose. Water brings out more of the water.

It’s all a Conspiracy people! Open your eyes! They bring you in on the nose, and then have a lesser taste due to brain parasites brought out by politicians I don’t agree with!

Dry, sweet finish. Seems almost disjoint from the taste and nose. I am missing those tropical fruits, the tanginess, the acidity. Instead we have a nice, but pretty standard ex-bourbon finish.

It’s not bad, just shouldn’t be here. Like those people I disagree with due to the aliens that stalk us in our sleep.

Or something. It’s hard to satirize conspiracy theories these days, I can’t think of anything more ridiculous.

Conclusion: So this is the “base” one. It ended up with a nose that would make me very confused. IF I DIDN’T KNOW THE TRUTH!

It’s an interesting nose, a nice, unique flavour, and then a finish that didn’t get the memo. Or listen to some insane person I’m mocking right now. Or maybe it’s just chemicals and doesn’t have a brain.

I’d say wake up there however that’s probably the most logical thing I wrote by mistake. I enjoyed this, however unless this was an on-purpose experiment, I would have left it in the cask to see if the finish perked up some more.

So if the last one took a different route, and showed off the variability of an ex-bourbon cask, this one does the virgin cask thing. It gets thrown into a volcano to make the Chinese heat up the world.

No, that’s insane. And would require hundreds of people to hide it.

No, virgin casks give off a coconut flavour, a fruit note, and some wood notes. This is all present here, as well as a herbal note. It’s hot in the nose, even after some water.

Nice caramel forward note. Comparing this to the last one, we have some of the brine, however the cask here is driving the truck. Lots of almond here.

May be too dry/hot for some people. 10 years in a virgin cask is quite a bit, and I’m glad they pulled this when they did.

Or did they? Is this actually a different whisky?

Not at all, that doesn’t make money. Stop making up the answer before thinking fully on these things.

Again, very much what I expect and enjoy from virgin cask whiskies. Specifically Scotches.

There’s the herbal, almond, and wood shaving notes. Those powerful notes continue to grow, with a tart element balancing it, and water bringing out a sweet element. The finish is way better than the rest.

In this case, what we have is the brine that is from Islay adding some interesting elements to the taste. We have a more herbal, blended together flavours here. We have almond cookies, not red fruits, and an interesting amount of almond.

Would this change the mind of virgin cask lovers everywhere? No, not at all. However it’s unique for a scotch, and reminds me why I don’t discount all virgin casks. 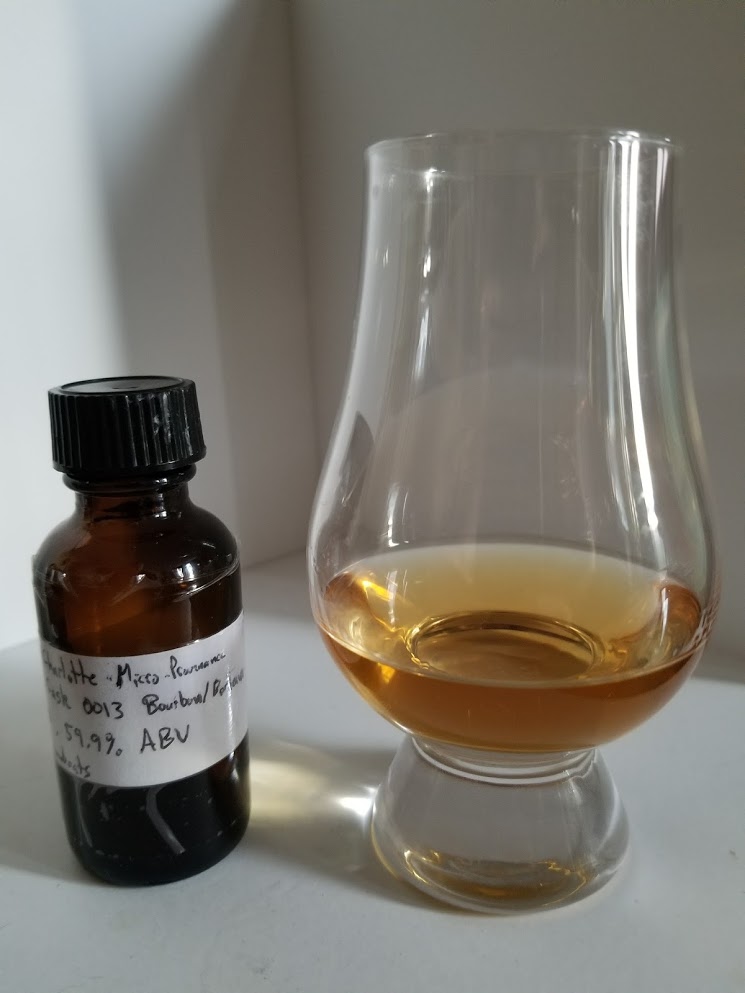 Starts out very similar to a sherry cask, albeit with more biscuit/almond notes. However the fight between the bourbon and the red wine cask (in the shadows through their proxies, the lizard people).

We see a funkiness that usually isn’t on caramel, some herbal elements (which I’m starting to think is in the base spirit, hidden there by the illuminati), and some floral elements.

We have a detente. That’s a fancy word in French for “holy fucking shit stop shooting”.

The different sweet vanilla elements work with the somewhat overly sweet red fruit elements. And if you’ve never had Canadian Smarties, then imagine someone felt the candy coating on an M&M was too subtle and added enough sugar to bankrupt beet farms everywhere.

Some nice smoke to this as well, though it’s hard to get past the cloying sweetness.

Earth dominant. There’s a good amount of chocolate, floral, and everything that the taste had, however the earth is here to balance it out and stamp out Canadian candies taking our communist sweets and taking out your mouth.

Conclusion: A sweet, unbalanced, though interesting dram. The nose has some funk that never shows up again. The taste is very, very sweet, much in the same way that a child’s sundae is too much. It shoots you with too many overly sweet flavours.

The finish attempts to fix the taste, and does so quite well. I’d say this is similar to the virgin cask in that it is nice on the nose and finish, however misses the consistency of the last one. The two casks fight it out at first, agree to pour sugar in your mouth, and then realize the mistake and fixes it.

Thus I enjoyed it more than just the ex-bourbon, though it could confuse you on the way.

Which is what the Illuminati wants! I think. Who knows.