This last year I’ve done the unthinkable: I made a 31 part multi review. I ended up learning a lot about my own reviews from writing and drinking that. For one, there is such thing as too much of a good thing. As well, I should split up my multi reviews unless very necessary.

Lucky for me, I had already been planning out my next “mega” multi-review. And as such, I needed to split them up. Thus we come to the Port Charlotte whiskies that were released from the original bottler, or rather, the OB.

That’s the tie that binds here. Bruichladdich Port Charlotte is still fairly new, and we’re still seeing how it grows. It’s from Islay, from a distiller that didn’t make a typical Islay, and it’s the closest thing that Bruichladdich has made to the terroir of the Island.

So it’s peated to 40ppm, and then left to Bruichladdich to change in their own ways. Let’s see how they differ, shall we? 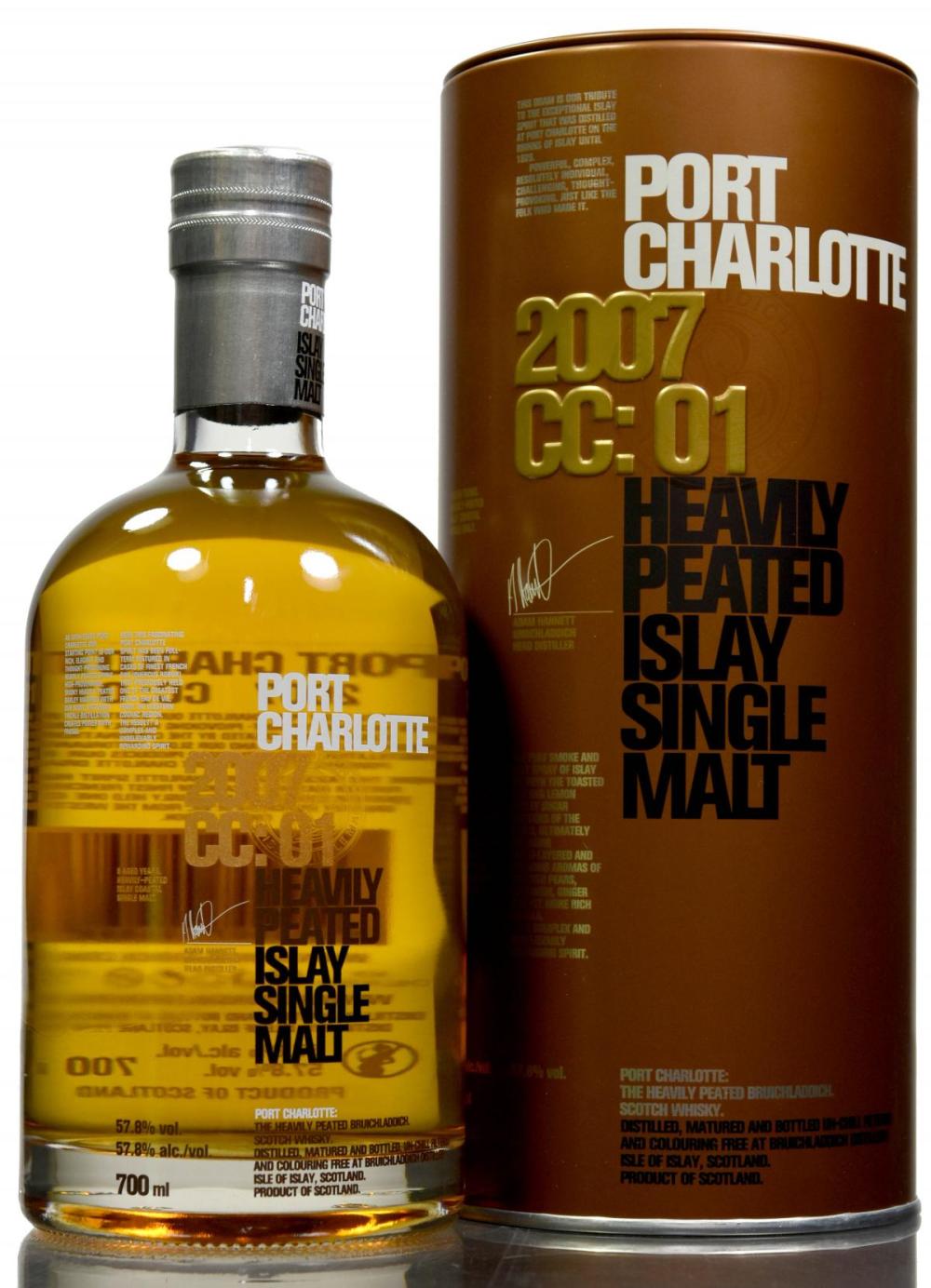 So we have a few things going on here. First off, I had never heard of trickle distillation. This is used by Bruichladdich to slow the distillation and ensure the distillers can cut the middle cut from the feints at the exact moment.

Eau de vie is a spirit that, after some time, turns into Brandy. Given that they didn’t say this was ex-Cognac casks, or ex-Brandy casks on the bottle. However perhaps there’s regulations in what to call it, and I’m not educated enough to say with any certainty if that’s the case.

So let’s see what an ex-Eau de vie cask does to this peated whisky, shall we?

This has a nice smokiness and some butter. A little bit sour too. There’s some odd notes here. It’s grainy, oddly enough, though developed that way? Eau de vie is weird, yo.

There’s a wonderful brown sugar/salty note here that dominates the flavours on the taste. It takes some water to bring out fruit and more of that developed grain note.

And before anyone asks, no, I’m not saying there’s any corn in here. I’m saying a flavour tastes like corn.

Again caramel and brine are the main aspects. And again, that well developed grain note follows up on the whole thing. Also the buttery notes come in at the end again, as well as the acidity.

Conclusion: Bold caramel flavours throughout as well as a big grain and big salty aspect. The nose makes you know it’s smokey, however the rest doesn’t seem like a very peated whisky.

It’s an odd dram. If you enjoy grain notes that are well developed, or have a love of salt and caramel, it’ll be for you. However it is unbalanced to the caramel, can be an odd dram, and at the end of the day wasn’t that complex. The extra points come from being unique and tasty beyond these downsides.

Bruichladdich Port Charlotte 9 2004 Single Cask is up next. I think it’s a specific whisky that was sourced for the New Zealand market, however… I honestly couldn’t find it at all. I have the picture just because scotchable shared it with me.

However this was bottled by Bruichladdich, is a single cask, and I’m happy to review it, all for the one fan out there wondering about a 4 year old bottling down in New Zealand.

Whatever, let’s see how this tastes…

Price: I have no idea

Nice strong nose to this. Lots of ex-bourbon notes here, however the smoke is more prominent here. Lots of brine, caramel, and even some burnt wood notes. That smell you get from an old fire spot.

Pretty standard ex-bourbon cask, with some brine to round it out. At first I’m trying to see what the big deal is. It’s not having the smoke of the nose, and seems to be missing the oak aspect. Vanilla is still there though.

Then this complex note comes from just a tiny bit of water (okay, a good amount of water). It’s odd, I assume given this has 60% abv. right on the dot, I have to assume it was watered down somewhat, yet a little more would have made it perfect.

Wow. Nice finish. It’s tricks me into the end. It takes those nice orange notes, that great non-bitter grapefruit flavour, and finally a big peaty finish.

Conclusion: More smoke than the last one. And I feel like the last one was just wacky. Nice to sip on, but at the end of the day wacky. This one? This seems closer to other Port Charlotte. It’s an impressive ex-bourbon cask when it comes to big vanilla notes without dropping the smoke.

That said, the taste didn’t wow me. It was very dry and fruit forward and too sweet. The Mai Tai part helped, certainly, and was complex, however it’s too sweet at the end of the day. I think this needed a few more years to balance out the sweet sides.

However maybe that would have hurt the peat. Hard to say. 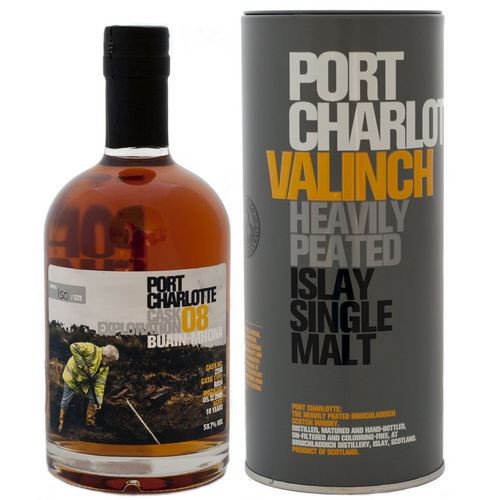 Bruichladdich Port Charlotte Valinch – Cask Exploration 8 Buain-mhona is part of the Laddie store exclusives. From what little I can find… dear god people, we need to write more about these things…

Anyway, what little I can find is that the Laddie shop has it’s own supply of Port Charlotte and interesting casks, just recently releasing the 14th edition. However I have a sample of the Buain-mhona, or “Harvest” according to Google Translate (my luck it means anus of happiness or something).

This is aged in Rioja casks. Rioja is wine from one of three regions in Spain. Now Throzen will correct me on what I missed explaining that.

Don’t know the specific part of Rioja, and can only guess it was red. Don’t know the type of grapes. All I know is I’d like to work at a place that has cool whisky on tap in cool casks. And a beer volcano and a hooker factory.

I’d be fine just with the first one though. And maybe some chocolate.

Whatever, let’s see how this tastes.

Odd. Not “Odd and that’s it”. There’s spice, there’s a tart funkiness, and it continues on with this balance of sweet, spice, and funk. You know, the opposite from what you want in your underwear drawer.

More spice. Bourbon fans, specifically ones who like weird ryes, or older ones, would love this. It’s spicy. It’s fruity, with just a little bit of floral.

It’s kinda odd to be having a peated whisky that was aged in ex-red wine casks and taste rye at the end.

Conclusion: Best so far of the bunch. This is well balanced, odd, however nice to sip on. The nose goes on forever. It’s super interesting. A little water brings out spices that perfect sum up Autumn, however also pairs well with the darker tart berry notes.

The taste is odd. Yet not enough to turn me away. Again, I like the funk on it. And the finish comes out of nowhere.

if anything, the only downside is the finish. And I don’t mean it’s bad. It’s great. It kinda makes sense. However… well it kinda doesn’t. I’m splitting hairs, however when a dram is this good, you split hairs. You have to.

But yeah, worth buying this, even at the higher price and even though it comes in a 500ml bottle.

One thought on “Bruichladdich Port Charlotte Triple Review – The OBs”