Thanks to /u/cpfselfbuilt for the sample.

Mortlach has gone from “the Speyside we don’t know about” to being “the awkward elephant in the room of only Scotch nerds who don’t really know social niceties.”

Yeah, that may be projecting. At least that’s it for me. A few years ago, I didn’t have many chances to try Mortlach whiskies. Part of that is due to the fact that Mortlach never released a single malt themselves. They were there in name only, or used for their equipment. Well until 1897.

The first official bottling came out in 2002. Before that the closest thing you could get were the Gordon & MacPhail bottlings. That doesn’t fill up the market for things to try. Also they use a ‘partial triple distillation’ method that makes my head hurt. Honestly, ask /u/unclimbability to explain it. I get dizzy just trying. Simple sells. Just look at some of the US presidents.

That, of course, is an oversimplification. I started reviewing in 2012. In 2013 Diageo threw £18 million their way to double production and start bringing out a single malt. Which meant that I didn’t start running into Mortlachs until a year and a bit later, from SMWS, in the UK. So to me, as an impressionable young whisky drinker and reviewer, I thought they were rare as heck. 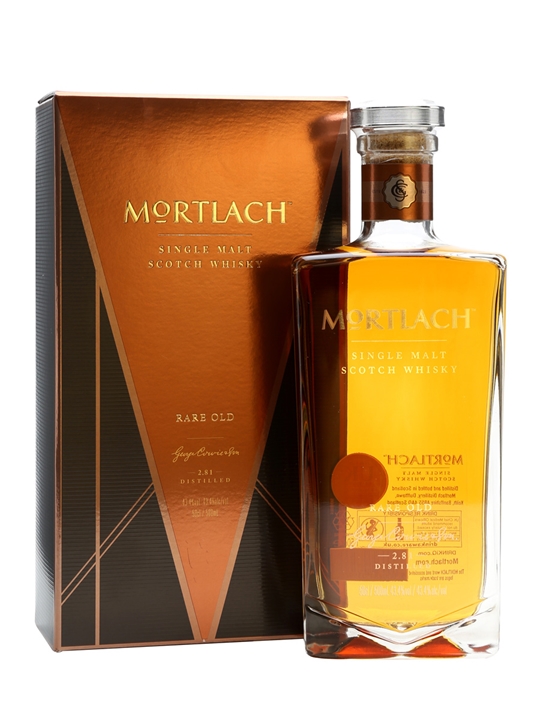 Then what happens? Mortlach Rare Old comes out around… what, 2015? And while I’ve been treating this like rare whisky you only find from IBs, this entry level malt comes out for the now super-premium Mortlach.

So you can see my dilemma. In the short time I’ve been reviewing (5ish years) it went from “hey, that’s RARE!” to “hey they got more money!” to “Wait, it’s a high end whisky?” That’s confusing.

Also it’s the first time I’ve had an OB from Mortlach. It’s made up of ex-bourbon and ex-sherry casks. So let’s see what a standard offering tastes like.

Initial nose is closer to a cheap Irish than anything else. Then there’s a lot of pear. A large amount of pear. It takes quite awhile to get past the pear.

Opens up more and more with butter notes. Also eventually a Mortlach note of ham is there, reminding you they haven’t changed. Because changing that elaborate system would be insane at this point.

More apple pie notes. Some spice. Enjoying the taste much more than the nose. Not too complex, though there’s parts of it that are starting to be complex.

Like inching their way there. Or rather the low abv. may be hiding things.

Finish is nice, though there’s some earth element that isn’t really jiving with the whole sweet fruit aspect we have going on here.

Again, I feel like a lot of the complexity is lost here. It’s trying to give me more than it can at this strength.

Conclusion: An interesting dram. I’ve said before that there’s no such thing as an okay Mortlach. As days have gone by, I’ve been proven incorrect. This is that okay Mortlach.

The abv. is the main culprit here, pure and simple. Good casks were picked, a balance was found between them, and it denotes the flavour profile that’s been used by so many IB bottles of Mortlach before it. And then… they had to make a consistent profit.

It happens. I get it. I wish I could try this at 46%. Or even at 50%. Maybe that’s the point, to try Mortlach Special Strength. Or get me to want it. I enjoyed this one, however for a little bit more I’d still buy the OBs.

One thought on “Mortlach Rare Old”