f I said “Massandra Madeira” to you, some of you would identify it as wine. Others would wonder if that was the cool girl you had a crush on in elementary/primary school when you were young due to her interesting Mediterranean looks. Still others would wonder why we don’t identify all Madeira that’s used, like we do with most sherry finishes.

Glenglassaugh 40 1975 Massandra Finish is not a sentence about said crush drinking the rest of your 40 year old Scotch without proper grammar. Me do better in English than that, yup.

No, in fact Massandra Madeira is Madeira wine that is from The Ukraine, specifically a place called Crimea. If you haven’t been hearing about it, may I introduce you to “the news” and “the rest of the world”. The winery is named Massandra, and is one of the oldest in Crimea. They just started flowing back out of The Ukraine in 2016 after the area reunified with Russia and the sanctions came about.

As you can see, it’s rare to see this wine out here, what with the world in the way it is. And I’m not blaming that on Putin (please don’t liquify my family sir). He has great taste in watches.

Moving on, this whisky comes from before Glenglassaugh was mothballed in 1986. And for awhile there, it really did seem like the distillery that sounds like marbles in your mouth would be gone for good. I mean, it was popular with blenders, but they were used to their favourites dying like lemmings at a bungee party.

Then in 2008 it was bought by the Scaent group. No one knows why. Really, they weren’t into whisky until that purchase. And then they started making their own spirits there with new equipment, all until 2013 when BenRiach bought it. Who were then bought by Brown-Forman.

So to keep up: This is a new release by Brown-Forean who bought it as part of BenRiach and their first foray into Scotch, which is a company (BenRiach) who were buying distilleries and then revitalizing them, who bought it from a different group who hadn’t owned one before but revitalized it as a distillery that was never coming back, which was made before any of the changes made by any of those companies as this is old stock.

Cross eyed yet? I know I am. Oh, and the cask it was finished in for a year is from Crimea…. Which I hear is a nice place, and not going to say anything else about, as I’m not going to end up accidentally falling from my balcony after accidentally being shot in the head.

Let’s just get to the whisky, shall we? 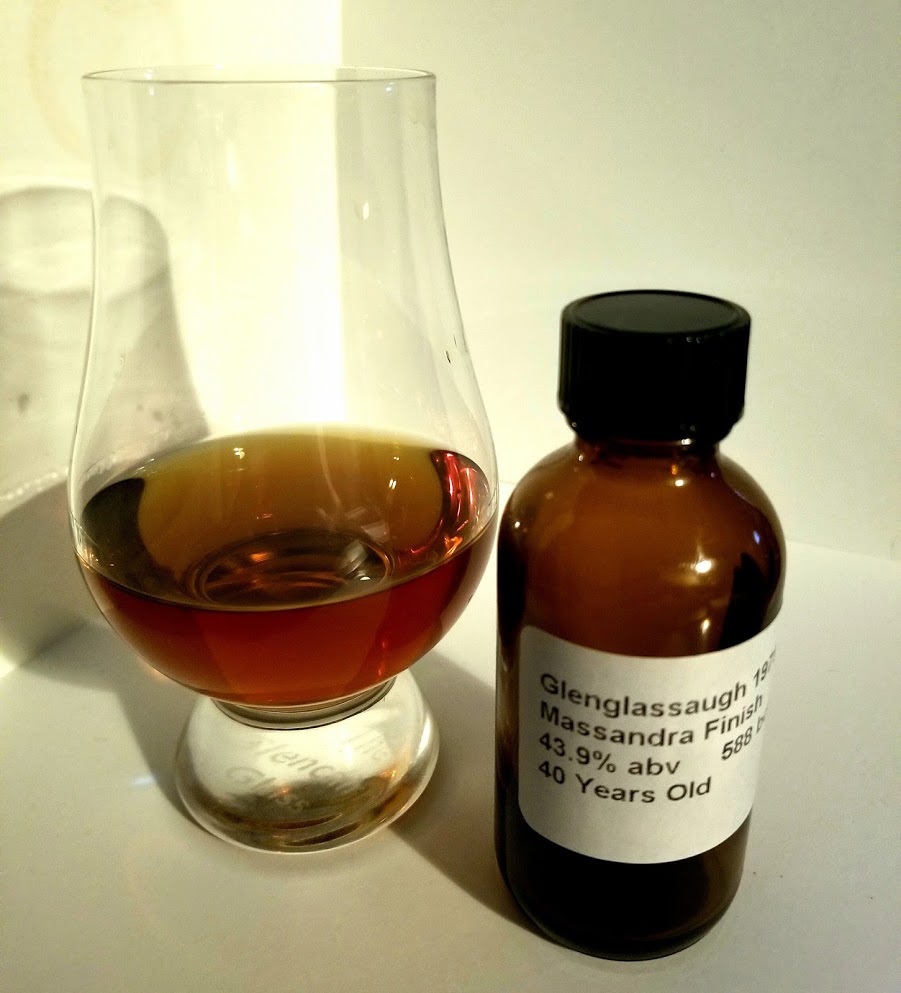 Flower bomb. Big ole flowers everywhere. Takes some time to get past that and end up with more and more sugar and fruit.

Unique nose. It’s moderately complex. It’s not subtle, though that may just be the flower bombs.

It’s impossible to separate the brine not from the floral notes. It’s tons of flowers. In your mouth.

This may be a bit too much of a floral aspect here. It’s hitting me over and over. I am a fan of floral drams, though that’s really all that’s going on here. Nothing too complex. It’s stepped down from the taste.

Finish is creamy and… you guessed it! FLORAL! And full of sanctions! But mostly floral. Sweet, cloyingly so, lots of caramel, and floral.

Question: You have a 39 year old whisky. It hasn’t been released with the other old whiskies that were sent out with the Scaent Group. And then you release it as a 1 year finish.

What does that mean? It means that it was in a very, very underactive cask to begin with, and you need a sacrificial lamb to make up some profits. So you use a cask that will raise some eyebrows and hope you can break even.

That’s what happened here. It’s all floral notes. If I was more of a Madeira drinker, my reviews would be different. Oh, and also I’d say what a lot of others have said, that the strong Madeira took over all aspects of this.

It starts interesting, ends poorly. It’s too simple to command the price. Interesting, but a hard pass unless you can just buy 1 oz. Then it’s an oddity to share.

One thought on “Glenglassaugh 40 1975 Massandra Finish”