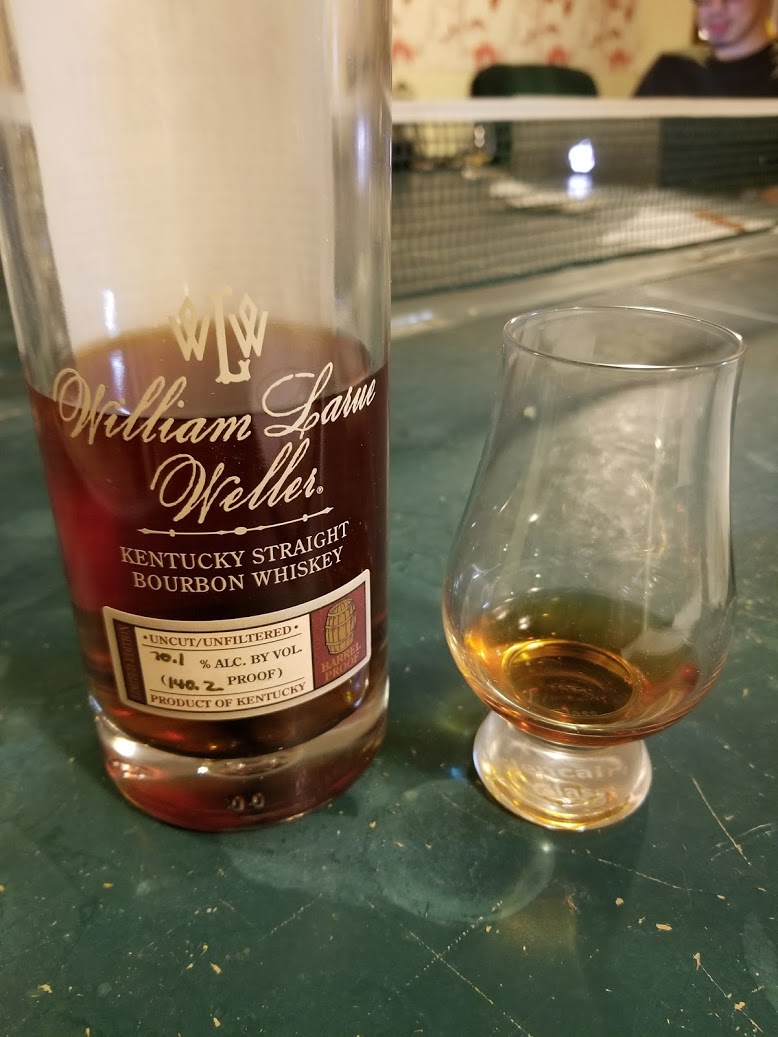 So we’re at a tasting. And I’m told that the next one is William Larue Weller (2014). And like any other reviewer in my shoes, I reacted appropriately.

You see, the last time I reviewed a William Larue Weller, I thought it was pretty good. And because I didn’t immediately collapse from happiness and give up all other whiskies, I was wrong. Something I’m used to being quite a bit.

But William Larue Weller (2014) was part of the tasting. And when offered a whiskey, I wasn’t taught to turn it down… as my parents didn’t follow my grandparents belief in teatotaling.

William Larue Weller (2014) is bottled from 39 barrels, aged for 12 years and 3 months, and made from an undisclosed mashbill. Only 3,933 bottles were released this year, with a 62.3% loss from evaporation being the main culprit. Also this was at a hazmat level of alcohol that mere mortals would be frightened by, but whiskey nerds love.

So let’s see how it tastes, shall we? And we’ll also see if finally anger the whiskey gods and they smite me down, as many have prayed.

Price: I think it’s suppose to be $145 CAD at the LCBO, however it sells out in 2 seconds.

A strong nose on this one. We made sure to give it quite a bit of time. At first it’s a blast of wood and strawberry. Given some time you dive into a big ole carrot cake with tons of brown sugar.

Water brings out more of a straw/cereal note and some cream corn. Which is quite nice.

Initial taste isn’t that rough, to tell the truth. And it’s the strongest thing of the night. And so far. Big buttery notes and lots of caramel and apple.

Really the flavours complement each other quite well while not blending into each other. Quite nice and powerful. Tastes like a really good dessert loaf. You know, the ones that you lie to yourself and say is bread and bread is healthy, right?

Nice long finish. Dry, lots of sweets, and some apple/pear notes that are more dominant. I enjoy this, however I keep looking for something else. I can’t say what… maybe some spice, or some butter from the taste.

Conclusion: Yeah, so this is really, really nice. Amazing nose and taste. Some really strong complexity on both, with complementary flavours, interesting uniqueness, and overall a great dram.

The finish, while long, was missing some element. Maybe it needed more fruit, maybe it needed more complexity, or maybe the taste and nose set it up to fail. Or maybe I hate love and happiness and life. None the less, I would recommend hunting down a dram and paying the kidney that you need to have a sip.