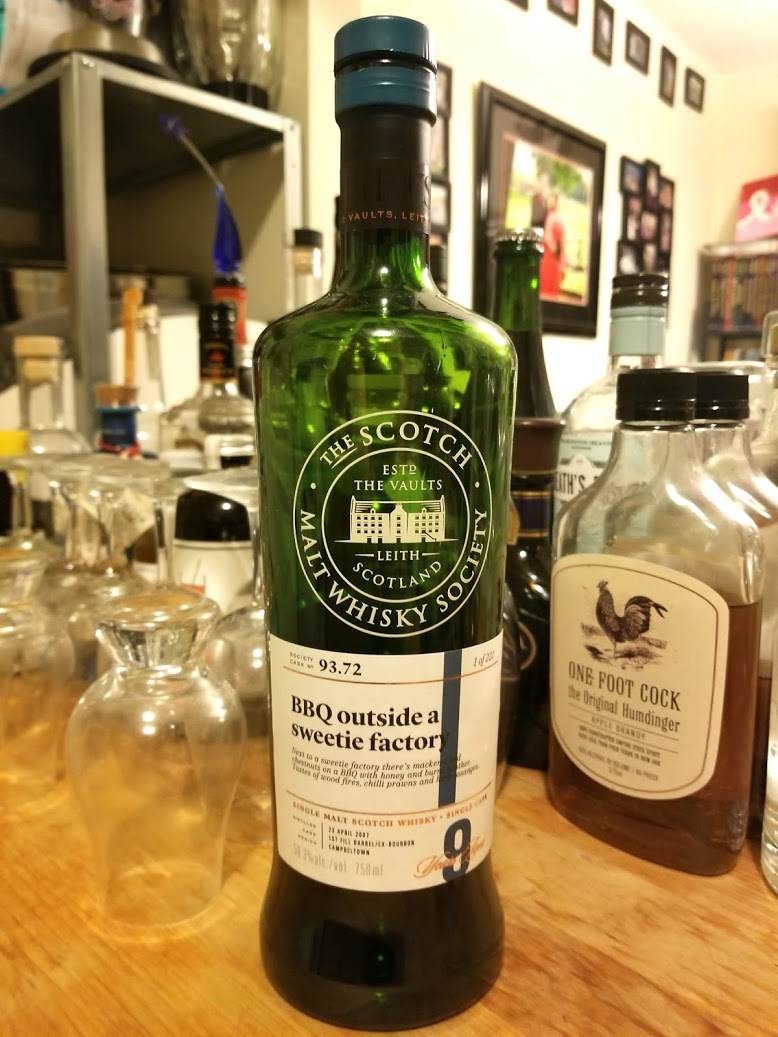 There was a time when Campbeltown was filled to the brim with distilleries. If you were an extremely wealthy person who liked whisky prior to the 1920s when the US made the mistake of thinking prohibition was a good idea, you could visit one town and go to 30 distilleries.

I’m assuming you were really rich though, because planes were still pretty new, you flew or boated to Scotland, and then had a way to get to Campbeltown. But enough about your richie rich times back in the days when racism was worse, people thought smoking helped cure cancer, and most people didn’t have rights.

I mean, geez, stop bragging about that. Jerk.

Now there are three distilleries in Campbeltown. And the only one that isn’t either owned by Springbank or had some money come from them: Glen Scotia.

Thus when offered a first-fill, cask strength, young Glen Scotia, I thought… Alright? And bought Glen Scotia SMWS 93.72 “BBQ outside a sweetie factory”. Because if there’s anything you could get me to come to, it’d be a bunch of charred meat and potentially some free sugar cubes with flavour in them.

Initial nose is a good amount of spruce. It jumps between walking through a forest during a rain storm smells of spruce (though not that strong or evoking) and using spruce in a campfire and then having that smoke come out.

Lots of spice and chocolate as time goes on. Surprising given who young this whisky is.

More spice, less complexity on the taste. Again, this seems more like an ex-sherry cask or something that usually has just a little bit of peat to it.

Nice pear to round it all out. Again, not super complex, however each flavour shines and works together. It’s a good winter/autumn dram.

Finish is where this is at. If the taste was the spice sweets, and the nose was that smell you get when the BBQ is lit but you haven’t eaten yet, the finish is that wonderful hot toddy or hot cider after a long day on the slopes, some oatmeal to be stronger, and some jerky, cause you’re a manly man or womanly man or manly woman or womanly woman or something I’ve forgotten and I apologize for.

Conclusion: A rich, interesting dram. I’ll say the taste is the weak part of it, with the spice being the interesting part, though it sadly falling to a caramel and pear “meh” side that doesn’t do the rest justice.

The nose is a spruce forest while cross country skiing and the finish is your breakfast after it. A good dram that I’m happy I split a bottle on.

Guess: A Highland Park that didn’t lose any of it’s peat?

One thought on “Glen Scotia SMWS 93.72 “BBQ outside a sweetie factory””