Growing up, I was lucky enough to be part of families that prized simple recipes. So for breakfast I was used to having porridge that was made from oats, milk, and maybe some maple syrup.

Yes, I grew up in a Norman Rockwell wet dream. At least when it came to food. 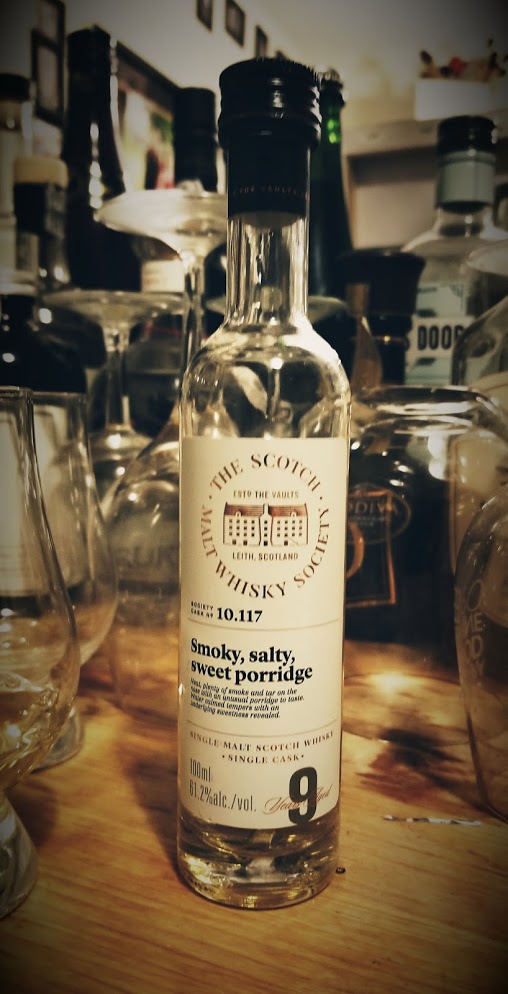 So when Bunnahabhain SMWS 10.117 “Smoky, salty, sweet porridge” came out, it was a no brainer. No, my mother didn’t make a smoky, or salty porridge. That would have been odd to feed a child that. Why would you even ask that?

Your odd choice of breakfast items for children behind us now (you think about what you’ve done), there have recently been some chefs who play with the flavours in porridge. And while they certainly aren’t for kids, the adults who have them have been enjoying them quite a bit.

So this is a young, peated Bunnahabhain aged with no sherry influence whatsoever. An odd dram to have, and one I’ve been trying to have more of as this year starts off (I’m a tad behind). So let’s see how this tastes, shall we?

Almond and pear give way to floral elements. And like the internet and just about every donut store out there, there’s some floral laundry detergent that brings me in.

Spice rounds the dram out, with some sesame elements to add to the odd nature of the dram.

Lovely sweets to this, which works nicely along with spice and brine. This punches way, way above it’s age. Given that in 8 years they went down to only 150 bottles, I’m assuming that the angel’s were working hard on this.

Or perhaps there’s a scientific reason. We’ll never really know (yes we will, it’s the science one).

Finish goes in an odd direction. There’s more fruit here, and lots of earth/mint combination. Quite unique that the rest of the dram has these earth and spice notes, yet the finish only gives a nod to the spice.

Conclusion: A dram that starts out with seed and floral notes, then goes to a well developed peatier note, and then finishes with fruit and mint.

What ties it all together? Not stealing the U.S. Constitution, that’s for certain. No, it’s spice. Cinnamon, Autumn spices, and more wraps it all up. So while being on that wild and insane ride that Bunnahabhain takes you on, there’s a seat belt made of spices keeping you in your seat and ensuring you don’t end up being washed off the ground by a three toed Carny who needs to skip town, again.

Suffice to say, if you have a chance to try this, do so.