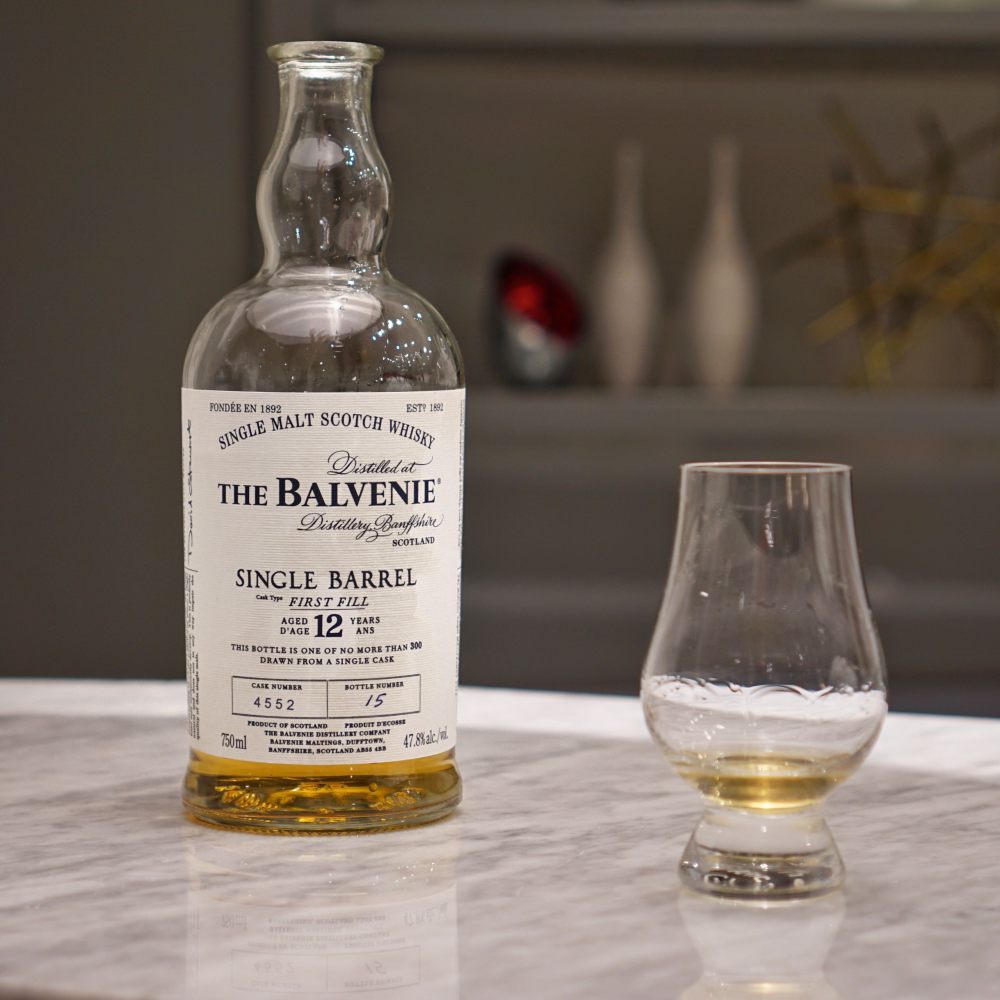 Thanks to whiskytanuki for taking the amazing pics at the recent tasting.

As the Balvenie tasting continued, I was very happy to see Balvenie 12 Single Barrel was part of it.

Specifically a member on reddit had asked why I had never tried Balvenie 12 Single Barrel. Sadly the price is a bit up there at the LCBO, and as such, I hadn’t gotten the chance.

The Single Barrels bottles are something I’m happy that Balvenie does. The difference between them means you can have fun reviewing them, and finding the batch that you enjoy. It’s a double edged sword, granted, with consistent flavour profiles changing over time, however I typically enjoy trying a single cask as they can be quite tasty.

So we have a main company that brings out whiskies that you typically go searching for at independent bottlers.

Balvenie 12 Single Barrel is the younger of the series, with each batch being below 300 bottles. Also it’s aged solely in first fill ex-bourbon casks.

That all said, it isn’t cask strength. The master distiller prefers to have a lighter, smoother profile. I may not agree with that, however I’m some schmuck on the internet, and he’s ensured that Balvenie still has age statements and survived the 80s, so perhaps I’ll be happy to agree to disagree and leave it at that.

Given some time, this one has more of vanilla and marmalade to it. It’s quite strong, stronger than some of the other offerings, and quite nice to nose.

Taste opens up more than the nose, with the ex-bourbon cask driving the bus, perhaps jumping part of the highway that needs to be jumped otherwise a bomb goes off.

Nice sweet elements added to nuttiness. Also takes some of the honey elements, and splits them into a vegetal/floral element and a fudge aspect. Lovely to have with sweets.

Very floral and charred to end. It’s almost like the first fill and the spirit are having a fight, one throwing flowers and the other throwing these big vanilla flavours. It can be a little confusing, though nice overall.

Conclusion: A sheltered nose on this one led to some big spice and vanilla flavours. I can see why this is enjoyed so much, it’s an ex-bourbon cask done well.

For the strength not being cask strength, I’m impressed. It misses some subtle notes and perhaps loses some of the unique elements, but not enough to annoy you.

It’s quite a sweet dram at the end of the day. Lots of vanilla going on. Not a bad idea to pick up, especially if you enjoy Balvenie. Heck, even if you don’t, let’s say you enjoy vanilla, then it’s up your alley.

One thought on “Balvenie 12 Single Barrel”