Thanks to /u/Davyj0nes for this sample.

I’m on the fence as to what to think about the Glenlivet Mystery line.

No, it’s not officially called that. I’m just calling it that.

For those of you not in the know (don’t feel bad, I myself only just read about the three releases), Glenlivet has a puckish side. Or perhaps a marketing side.

Getting back on track, Glenlivet has released three scotches in black bottles meant as a mystery. The first one was Glenlivet Alpha, which was a limited release of 3,350 bottles. Information about it was slowly teased out to the public. It ended up being a 50% release.

Then came Glenlivet Cipher, which again was teased out. We now know it was 48%, and made up of First-fill sherry and first-fill ex-bourbon, non-chillfiltered, with no colour added, and had a larger release. Also a more elaborate label.

The idea of all of these is for people to try whisky without preconceptions. Again part of me is interested in that, and part of me typically tries to drink like that, so I agree with it. Finally the previous reveals, the non-cask strength, and the price (I don’t rate on price, but I’m not immune to it) all make it seem like a fancy way of releasing a NAS release.

Granted I’d be remiss if I didn’t mention I also feel like a hypocrite for not saying the same against Bruichladdich Black Arts, so perhaps I should stop thinking about this, picking it apart, and actually, you know, see what it tastes like. 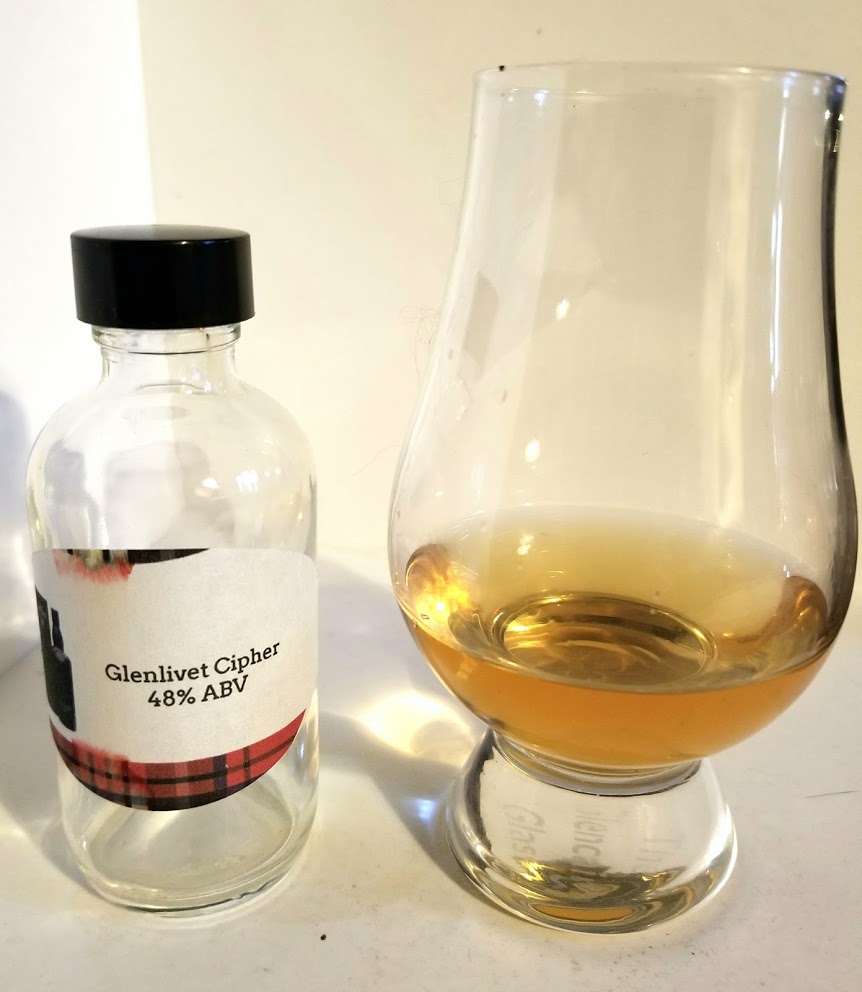 Interesting nose. Initially has that cakey/well developed lemon rind note, along with some nice floral aspects.

Blind I probably would have guessed only ex-sherry on the nose, however I’m glad they mixed with ex-bourbon, given the strong brown sugar/varnish notes. All works nice together. It’s not too bombastic, though nice to nose.

Simpler taste than the nose would give off. This has some nice stone fruit/caramel/spice mixtures that work well together.

That said, I mean… you put something in a dark black bottle, the above flavours better be out of this world, and these are pretty just okay. It’s not grounded, but it’s certainly not flying too high up.

Finish is nearly just herbal and mint, however there’s some nice, rich sultana flavour at the end. Jumps in like some vigilante and saves the day. Or at least the finish.

Nah, it saves the day, let’s be honest.

Conclusion: I’ll start by saying I’m not against the idea of mystery whiskies. However if you’re going to make one, you should be knowledgeable about what else is on the market, and where the bar has been set.

This is an alright dram. it was nice to sip on, and the nose is quite nice. I appreciate that Glenlivet didn’t just pump out some sad whisky while saying it’s mysterious. That said, beyond the nose, it has some trouble hitting the levels of other completely black, mystery whiskies (save for maybe their 5th release).

One thought on “Glenlivet Cipher”