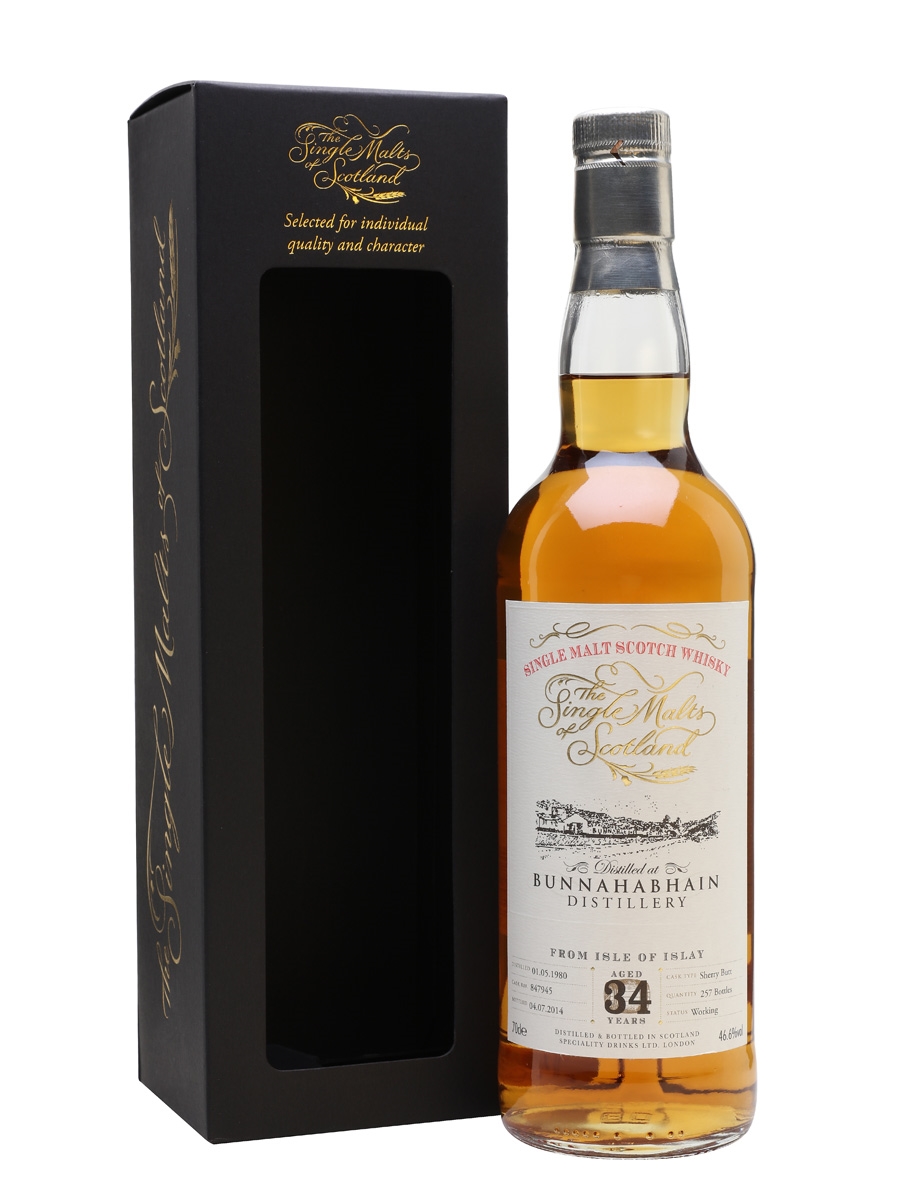 Thanks to /u/Theslicknick6 for the sample.

And with this, we end the “Bunna-have you any more sir?” series, in which I go through my backlog of way, WAY too many Bunnahabhains and review them.

I hope you weren’t expecting another 2,000 reviews in which I try and hit every single one. I have tried to cover as many as possible, however there’s some that I just couldn’t get my hands on. A certain newest one that I’m not going to mention but say that there’s been enough hype so I won’t give it the 200 or less people who will read this.

However given all that, I should aim for an Independent Bottler who I don’t normally see, Single Malts of Scotland, a division of Specialty Brands Drinks Agency, all named by someone who doesn’t fuck around when it comes to names. I assume he lives in a house on “suburb” drive, and drives a “car”. His pets are named “cat” and “other cat”.

So Bunnahabhain 34 1980 Single Malts of Scotland is a 34 year old Bunnahabhain, yet again fully matured in a sherry butt. It is cask strength, though after 34 years the angels have picked over this like the sandwiches at the end of a funeral.

Well let’s put the fun in funeral for this review, shall we?

Really rich butterscotch. Interesting mixture of complex and simple flavours. I love the smell of walnut cake. Mostly because walnuts aren’t something I can have, what with them causing paralysis in me.

The notes hit you really quick. Quite nice dram.

Nutty, apple, and musty. It’s quite old, and the age of the sherry cask denotes that really lovely leather and musty aspect. Lovely mouthfeel.

The finish is where this one shines. If the taste was hinting at the flavours, the finish delivers. Tart apples, big leather, pear and almond cake, peppery vegetal, peanuts, and tropical fruits.

So basically it’s either this or finishing off a full European dinner. Granted both are quite decadent, so it’s not like a 30 year old Scotch is somehow cheaper or less hoi polloi.

Conclusion: So this is as close to “blow my mind away” Bunnahabhain as I’ve, personally, had. This hits that old, wonderful leather sherry cask mix. It takes the nuttiness and elevates it, it throws a lot at you, and really proves that older sherry casks were better.

That all said, I think I’ll tip my hat here to the cask managers and what not over the whisky from Bunnahabhain. I like their stuff, however I’m still looking for a legendary malt.

One thought on “Bunnahabhain 34 1980 Single Malts of Scotland”