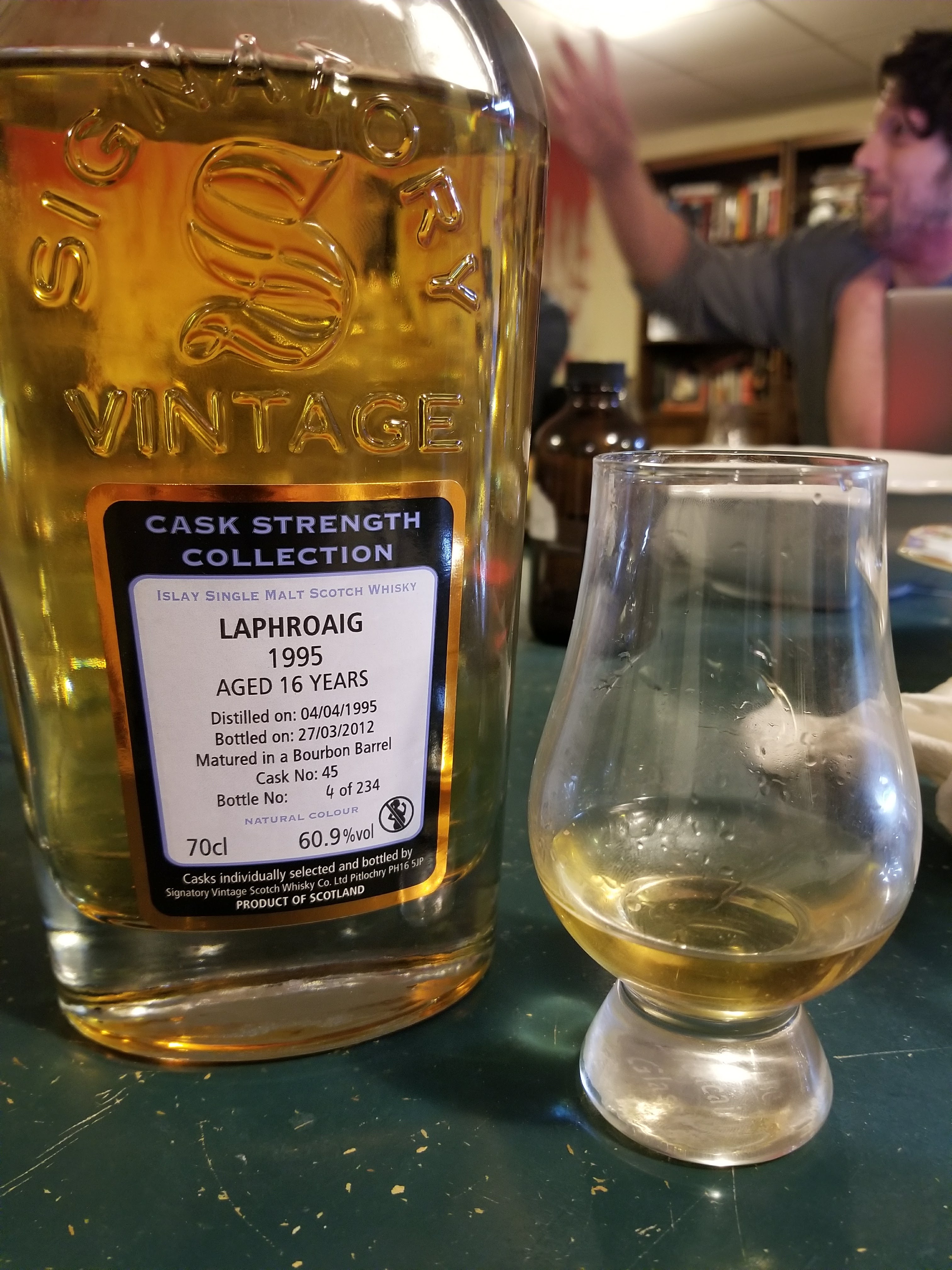 Thanks to /u/xile_ for sharing a dram of this one with us.

If you’re a bourbon fan, this may seem like an odd situation. You haven’t had the downturn yet, and seemingly, like the housing boom and all things in life, the price will just keep increasing.

In the case of Laphraoig, we’ve recently seen that finding independent bottlings rising in price, and being harder and harder to find. Also with the Cairdeas line being pretty sweet, our tastings haven’t had as many Laphroaigs as they once did.

Granted we have to ignore the Laphroaig tasting when discussing that as well.

Thus it’s now a treat to finish off the latest tasting (that I’ve written up) with Laphroaig 16 1995 Signatory Cask Strength. This 16 year old, nearly 17 year old whisky… yeah, that sentence is uncomfortable to start, I’m going to need a minute.

So anyway, this whisky is aged in a single bourbon barrel, definitely bottled at cask strength (I can read), and is nearly 17 years old. All could be great, however maybe we’re running low on good Laphroaigs. Let’s see, shall we?

Matured in a Bourbon Barrel

Yeah, I don’t know what sour grass is either. I’m assuming I mean that there was a distinct acidic note that couldn’t be separated from the grassiness. Or I’m full of shit.

Either way, very unique nose. There’s still some wood smoke element on this one, though it takes second fiddle to a bread/cereal note and nuttiness. Water brings out nice banana, making me wonder if the cask is from Jack Daniels.

Somewhat bitter at first. It’s not super inviting, and needs those extra sips to pull out a creamy, lime element.

Great smoke, and a nice continuation of some grass notes.

Less acidic and more inviting than the taste. The finish makes up for any missteps in the taste, overall. It just keeps building up, starting out as a general ex-bourbon cask, and then with water/time, going to this sweet, cocoa enriched whisky.

So I like it. That would have probably been easier to write.

Conclusion: An interesting whisky that I think most Laphroaig fans would be happy to have on their shelf. The taste isn’t well developed at first, however I’m thinking either with the bottle being opened or a little bit more resting time or even a bit of water, that’s evened out.

The finish is what you drink this for. A well put together dram. And frankly the nose was unique and inviting, with flavours that if you hate, I assume you hate food in general.