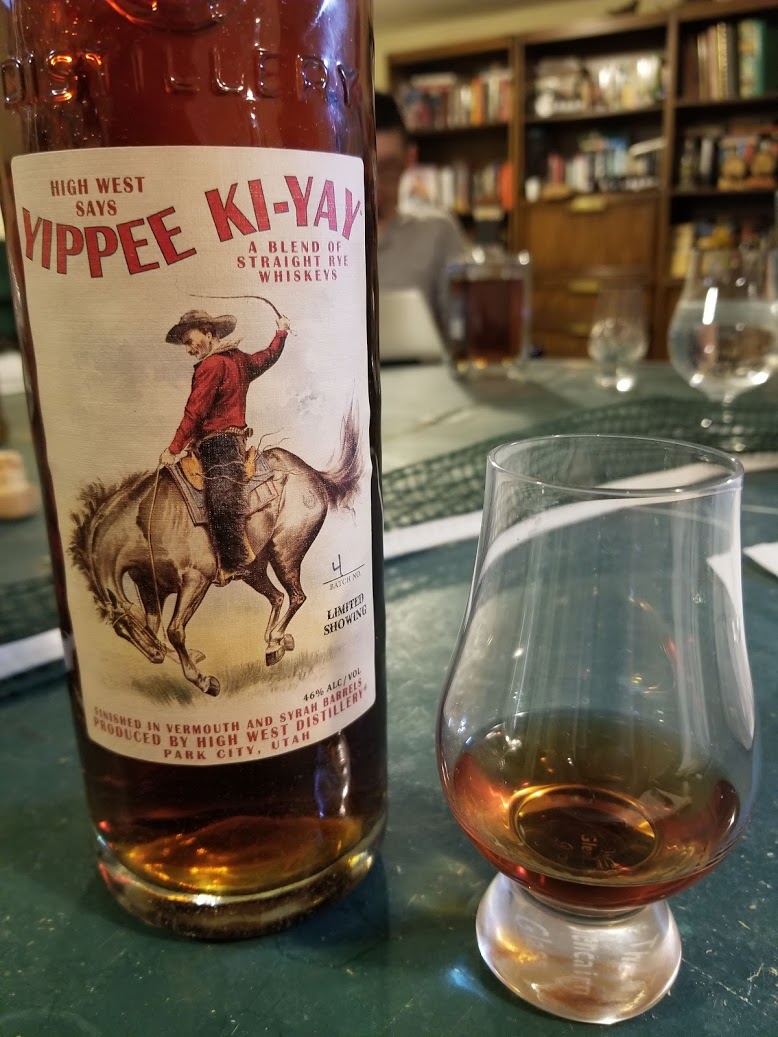 Had a tasting. Didn’t have a set idea. Just brought out whiskies we wanted to drink. Like we should.

I decided upon High West Yippee Ki-Yay. Why? Because something this odd needs to be savoured.

But what is High West Yippee Ki-Yay? The name would denote using ex-bean casks and potentially quoting Blazing Saddles while it ages. I don’t know about the second part. I assume that’s it’s always a chance.

So start with High West Double Rye, and then finish is in ex-Syrah red wine barrels and ex-Vermouth barrels. Double rye is a blend of straight rye whiskeys aged from 2 to 16 years, and the three mashbills of the components are:

And why name it something that at least one of our fellow tasters stared at for hours, attempting to say out loud? They like saying it. And they are in Utah, where there are cowboys (and cowgirls) aplenty.

Initial nose is floral, with some cherries. Really noses somewhere between a sherried Scotch and a cocktail that people will assume is “girly” and weak and then drink and end up on the floor, along with their dumb ideas.

Nice spice, good amount of fruit. The rye shines through, which is a relief.

Ah, here we go, closer to a rye now. Yes, it’s still quite sweet, however, the rye vegetal notes may through you off at first.

Drinks like a cocktail too, making this the most dangerous dram in my cupboard, next to the rat poison (I kid, it’s for mice).

May be a bit too sweet for some. Give it more time and it gets sweeter.

Really rich finish. This is the part that I liked. The leather, the dark cherry, and even some of the spice remind me of older sherry casks that are getting rarer by the day as I drink them up.

Conclusion: Unique dram, that’s for certain. This is not something you’re going to reach for when you’re hankering for a whiskey. It’s more like something you sip on a hot day instead of a cocktail. It balanced itself between that and a sherried Scotch.

I have to say I love the mint throughout. The cherry and sweet aspects were fun to sip on, and something I enjoyed. Is this for everyone? I don’t think so. It’s very unique. If we had more of these types of whiskies and less flavoured ones, I’d be happy.

Try before you buy, unless you have a sweet tooth like me, then just buy instead of a premade cocktail.