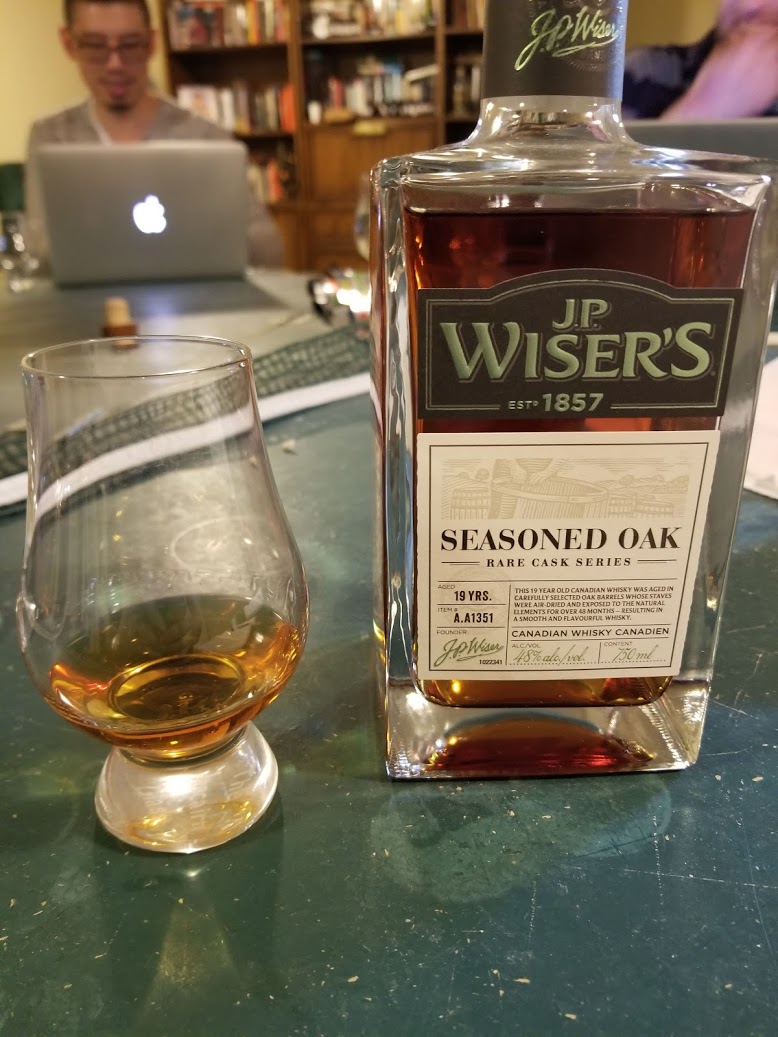 Thanks to Corby for supplying a sample to me for this review.

Recently there’s been some nice Canadian whiskies coming out, which as a Canadian whisky fan I’m particularly proud of, as I was born here and therefore due to the transitive property, I’m great too.

Joking aside, I am happy for the idea of new and better Canadian whiskies. The Wiser’s Rare Cask series has had some fun drams, and I’m happy to hear about their new one, J.P. Wiser’s 19 Seasoned Oak.

But what’s the story here? Well it’s 19-year-old whisky that has been aged 18 years in ex-Bourbon and ex-Canadian whisky and then finished for 1 year in seasoned oak casks. For those of you who missed other whiskies that have also used this idea (that are not Canadian whisky), normally virgin oak casks are exposed to the elements for 1 year before using them. These ones were instead exposed for 48 months.

So we have a stronger virgin finished Canadian whisky. It uses the same proportions as Wiser’s 35, which I was a big fan of. Thus it’s a blend of double-distilled corn/grain whisky (DD) and column/pot-distilled rye (Star Special).

Interesting. I’m not used to a Canadian whisky having the extreme Virgin cask influence. Which is nice. Though I think it needed a bit more time to really amp up. Some nice spice and butter in there, though it’s quite light.

Taste is caramel and sweet forward. Takes some time to open up with a bit more mineral. Though it’s pretty simple. I’m not getting much of the cask influence as I’d like.

Finish tastes young. Again I think that it needed more time. It had some of that coconut I’d want, however… yeah, tastes a lot younger than a 19-year-old dram.

Conclusion: Overall this tastes like a generic Canadian blend, which, depending on what you enjoy, you’ll be very happy about or kinda sad. It had greater spice aspects and some of that “virgin oak” aspect that can be nice in some whiskies.

There’s some mineral, some young aspects, and things that I don’t suspect from an older whisky.

That said, Wiser’s makes better whiskies. Some additional rye should have been used here to amp it up. Or maybe follow the path of other whiskies that have used this method and do a full maturation.

Frankly, the Wiser’s corn whisky tastes great after a long period, and this hasn’t been given the time needed. Perhaps using these casks in the future for older releases will give us a better yield, or for a different blend. I’d love to see what would happen with the Last Barrels recipe would do with this whisky. Or if the same whiskies were fully aged with it.