In my ongoing need to finish off whiskies that all come from the same distillery, it’s time for the smallest (in size, not in ferocity) distillery in Scotland, Edradour. So remember: As one Edradour closes, another one opens.

So to start we have two picks from Binny’s. For those of you not in the know, Binny’s is an alcohol seller in the US. They have a variety of store picks. There has been some debate on who was picking the alcohol, and if their replacement is doing as well.

But that’s the interesting thing about store picks. What you have, at the end of the day, is someone’s love of a whisky. And they choose based on what they like.

I haven’t had too many Edradours. Prior to 2003, there was quite a lot of variation between batches due to the small size and the “quaint” equipment. However, the former manager of Laphroaig, Ian Henderson, was convinced to sign up. And then they decided to focus on single casks, all of which have different finishes/maturation.

Wait… maybe not that last one.

Alright, I’ll admit it: The idea of the finishes/maturations both wows me and can be a cute way to hide a rough whisky. But we don’t know that if we try it, so let’s get into it, shall we? 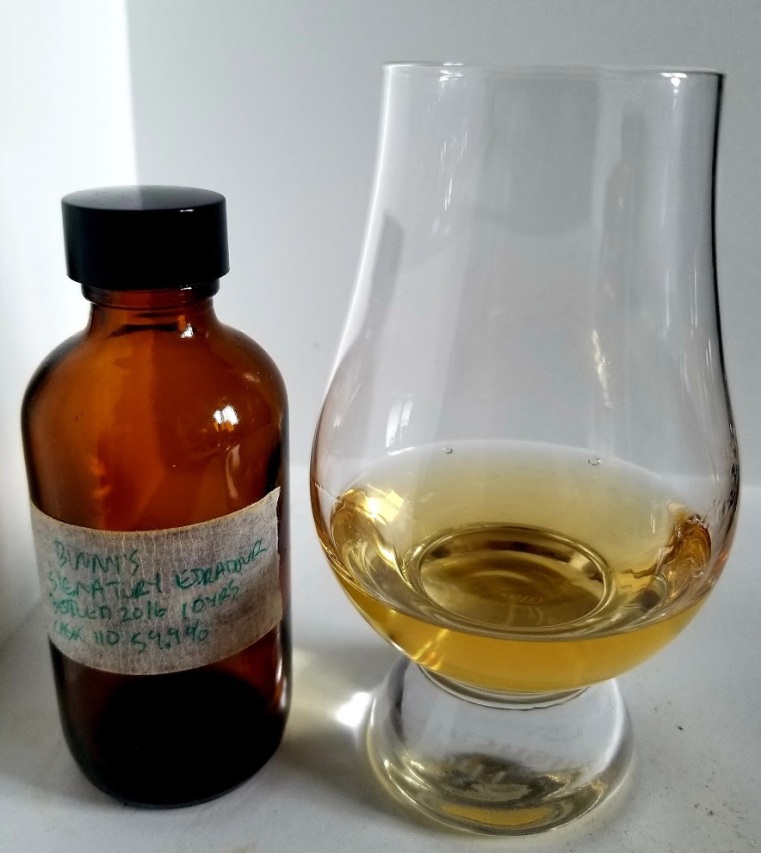 Thanks to /u/danzacks  for the sample

Lots of sour notes. Which is a surprise from one of the ex-bourbon cask? Also, Signatory and Edradour are owned by the same overlord company.

So my initial thought is this is the standard profile. Looking back at my Edradour 10 review, it was similarly fruity, though not as strong of vinegar/tart. Water certainly helps bring out more tropical, though it’s quite simple.

Ah, there we go. Less tart, dry, and has some sweet chocolate. Really sweet. There’s still some alcohol heat going on.

So this is different. The fruit and pear remind me of sweet wines. However, there’re still some cereal notes to bring it back to whisky.

Dry, sweet, and some spice to round it out. Still sweeter than I was expecting.

Conclusion: Desert dram. Not a typo, this is dry. Very dry. And sweet. It’s hitting both those points a lot.

The nose is simple and a warning. The taste and finish? Repeat it, but with finesse. That’s why you’d drink this, I feel. The nose never amped up, even with time and water. The taste was missing some spice. A nice dram to sip on.

Price: $90, however, I don’t think it’s available anymore, so give up a kid on the secondary.

Less dry and more fruity, however, I’m seeing a pattern here between these two (that’s not a pattern). Okay, a theme? Whatever, the nose on each of these is lighter. Is that a thing for Edradour? Probably not, I found the 10 year had an interesting nose, so perhaps it’s the person picking it.

Wow. Very tight package of complexity. Lots of eggy, strawberry, creamy notes. Some tart, some tropical, and eventually more of a woody/caramel note.

This really surprises you as you drink it, growing more and more with time.

Finish is really interesting. Like “haven’t had this before in a whisky” odd. Lots of tannins, lots of stone fruit, but if stone fruit were used in a beer.

Conclusion: Quite the complex dram. Yes, the nose isn’t doing it any favours.

However, the amazing unique finish that works well on a summer day is amazing. The taste is pure complexity. Frankly, if the nose had jumped the hurdle of the rest of the dram, this would have been one of the best I’ve had this year.

I doubt you can still buy this, but if you can, do.