Thanks to Bowmore for sharing a sample of this whisky.

Turns out I had quite a few samples of Bowmore. My stores are now so full I can’t fit any Bow-More of them. Thus that’s what I’m calling this compendium of reviews.

We’re starting it all off with an OB higher cask strength version of Bowmore. Bowmore Vault Edition No. 1 – Atlantic Sea Salt is the first of four series, each aged in the No. 1 Vaults. Each is meant to show off a different aspect of Bowmore.

What are those aspects? Well, I can tell you one of them is Sea Air. This one was aged in ex-Bourbon casks to show that off. I found out from one website that the second will be Peat Smoke, which makes sense. There’s a blurb that says Vanilla Sweetness and Citrus Fruits will be the other ones. Which hurts me, because what else will my future drag names be? Help a sista out Bowmore.

I can’t seem to find if any of the others came out, as searching Google keeps giving me this one. And it’s still up for sale. It’s been two years, so maybe they are working on it to make sure it is good.

None the less, this solved what I call “The Bowmore problem”. Which I guess sounds negative, now that I read it back to myself. Suffice to say, Bowmore shines when it’s cask strength, in my not-so-humble-and-frankly-pompous opinion. Thus this solves it.

But a salt forward dram? Specific Atlantic Sea Salt? Is that going to play well on the West Coast (this is a joke)? Let’s see, shall we? 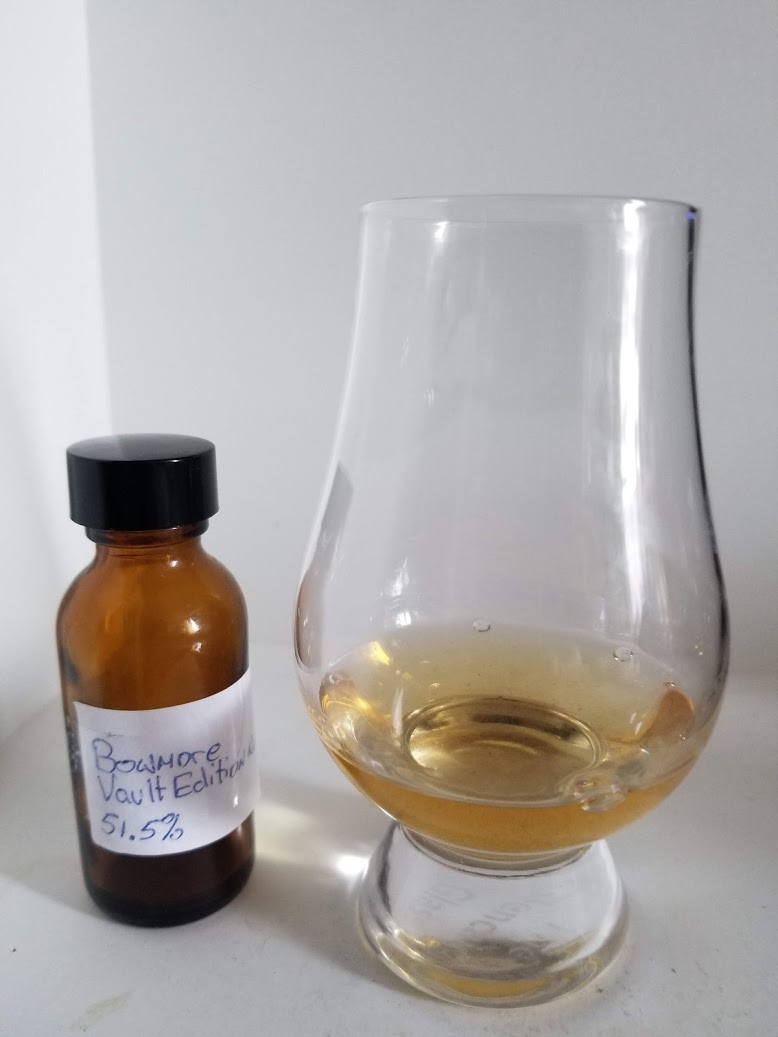 Fruity, and then bang! Salt air, no kidding. It’s a nice saltiness there, with some sweet, floral elements. Water brings out more sweet aspects.

This isn’t blowing my socks off though. Perhaps it’s just a shy nose?

Alright, some cereal, some tropical/sweet aspects, and some smoke… Not too much salt here. The caramel seems stronger and is quite intense here.

Perhaps that’s where the salt is here. I should note that I reviewed this without the full name. Or maybe being married to a Newfoundlander has finally killed my ability to taste salt? Nah, I do the cooking.

Interesting earth and umami on the finish, with some sweetness. Again, not the salt given the name, however, the finish does earth well. Sadly it doesn’t do much else.

Conclusion: Alright whisky, more caramel based than other Bowmores I’ve had. That’s the main thing that I came away on this one. I’m guessing the salt aspect on the nose has some effect on all of that.

A really interesting idea for a whisky, and if standard Bowmore tasted like this, I’d be impressed. Thus the Bowmore Problem. They can’t make money selling only cask strength whiskies. The whisky screams out to be cask strength though. A conundrum that I watch Bowmore for.

Suffice to say this was nice to sip on, and the nose was my favourite part. There are some stronger Bowmores with more complexity though.

One thought on “Bowmore Vault Edition No. 1 – Atlantic Sea Salt”