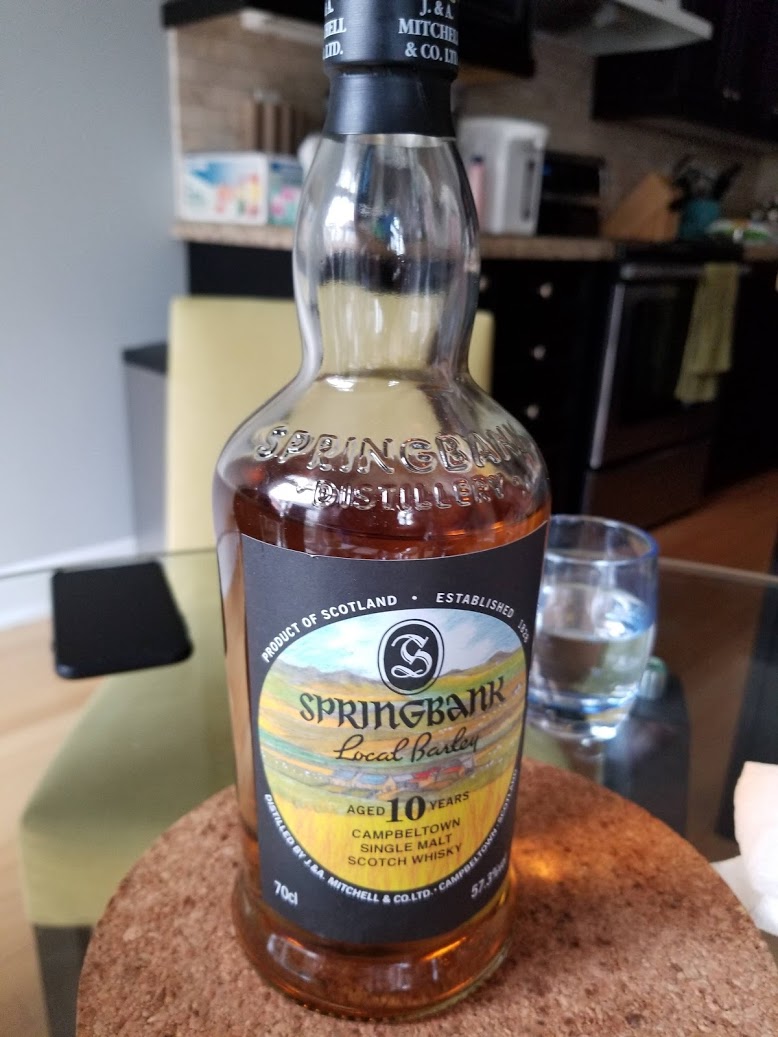 To recap: xile_ (his real name, really) had us all over for a mystery lineup. I brought brownies. That’s really not useful to the review. Well, I didn’t have them until the whiskies were done, and drank tons of water between each dram. Maybe that’s useful. Oh, and all of the whiskies were poured blind. xile_ bet I’d get two right. I showed him and got none right. That’ll show him.

I’ve been fortunate enough to have tried the recent Local Barley offerings from Springbank. Not just because I’m a big fan of Springbank offerings. More so because each one has been a surprise.

So, bias right off the bat: I preferred the 11-year-old over the 16-year-old. For me, the older Local Barley was too much like rum, and the younger one was brash, fierce, and every else that we’re told that Pop Stars have (as long as they are female).

Which brings us to Springbank 10 Local Barley. The idea is the same: Barley is locally sourced, aged for a specific amount of time, multiple casks are used. So we’re left asking if terroir is a thing (barley, not the idea of whiskies from a specific location will have similar taste profiles, as that’s subconscious) or if it just means we get more Springbank.

Which I think is a cool idea. Let’ see how this tastes, shall we?

Ah, we start onto the peat drams. Salty element to it, nice toffee, and even banana going on.

Not as much stone fruit as other Springbanks. Immediately think this is an older Islay, as the peat isn’t super raw, and there’s a floral, caramel element to it.

Wow. An explosion of chocolate, lots of stone fruit, and even more floral elements. Just a bit bitter to round it out. Water brings out this rum banana (not daiquiri, think flaming dessert that probably shouldn’t be served anymore what with burning people.

Creamy chocolate bomb continues. More interesting is the tart flavour with the alcohol, some salty, and some pineapple.

Do you like chocolate? Are you alive? The answer is usually the same to both of these questions. This is tasty.

Conclusion: Chocolate bomb, pure and simple, though not as simple as that. There’s a different direction with the flavours. Instead of caramel, you have toffee. Instead of brine, you have salt, cleaner. Instead of funk, you have a banana.

All in all, this is really unique, and I enjoy it quite a bit. Granted I love chocolate, so it’s up my alley. It may be too odd or too sweet for some. It punches way above it’s age.